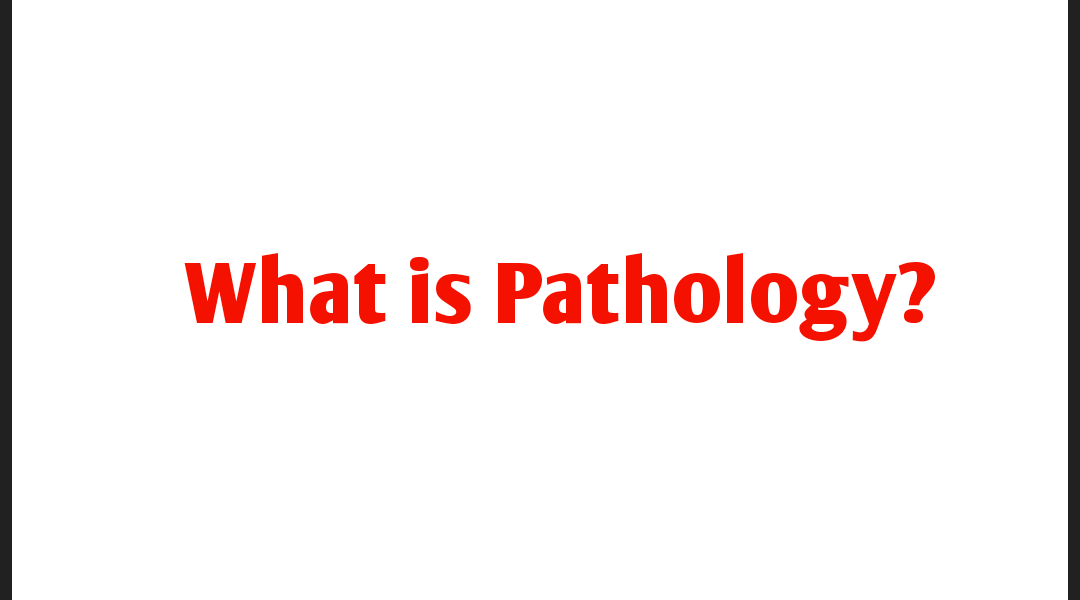 The scientific study of disease is called pathology. It involves the determination of the cause (etiology) of the disease, the understanding of the mechanisms of its development (pathogenesis), the structural changes associated with the disease process (morphological changes), and the functional consequences of those changes. Correctly identifying the cause of a disease is necessary to identifying the proper course of treatment. Humans, other animals, and plants are all susceptible to diseases of some sort. However, that which disrupts the normal functioning of one type of organism may have no effect on the other types.

The normal state of an organism represents a condition of delicate physiological balance, or homeostasis, in terms of chemical, physical, and functional processes, maintained by a complex of mechanisms that are not fully understood. In a fundamental sense, therefore, disease represents the consequences of a breakdown of the homeostatic control mechanisms. In some instances the affected mechanisms are clearly indicated, but in most cases a complex of mechanisms is disturbed, initially or sequentially, and precise definition of the pathogenesis of the ensuing disease is elusive. Death in humans and other mammals, for example, often results directly from heart or lung failure, but the preceding sequence of events may be highly complex, involving disturbances of other organ systems and derangement of other control mechanisms.

Pathology is a branch of medical science that involves the study and diagnosis of disease through the examination of surgically removed organs, tissues (biopsy samples), bodily fluids, and in some cases the whole body (autopsy). Aspects of a bodily specimen that may be considered include its gross anatomical make up, appearance of the cells using immunological markers and chemical signatures in the cells. Pathology also includes the related scientific study of disease processes whereby the causes, mechanisms and extent of disease are examined. Areas of study include cellular adaptation to injury, necrosis (death of living cells or tissues), inflammation, wound healing, and neoplasia (abnormal new growth of cells). Pathologists specialize in a wide range of diseases including cancer and the vast majority of cancer diagnoses are made by pathologists. The cellular pattern of tissue samples are observed under a microscope to help determine if a sample is cancerous or non-cancerous (benign). Pathologists also employ genetic studies and gene markers in the assessment of various diseases.

Surgical Pathology is the most significant and time consuming branch of pathology with a primary focus on examining tissues with the naked eye or under a microscope for definitive diagnosis of disease. Surgically removed specimens are received from sources such as small biopsies of skin, core biopsies for the diagnosis of cancer, and the operating room where tumours are removed. Surgical pathology involves macroscopic (gross) and microscopic (histologic) tissue analysis where the molecular properties of tissue samples are assessed by immunohistochemistry or other laboratory tests.

Histological sections of tissue are processed for microscopic viewing using either chemical fixation or frozen section. Frozen section processing involves freezing the tissue and generating thin frozen slices of the specimen which are mounted onto glass slides. Prior to viewing the tissue under a microscope, slides processed by chemical fixation or frozen section are either stained with chemicals or antibodies to reveal cellular components.

Autopsy is a highly specialized surgical procedure that is performed by a pathologist and consists of a thorough examination of a corpse to determine the cause and manner of death and to evaluate any disease or injury that may be present. The principal aim of an autopsy or post-mortem examination is to determine the cause of death, the state of health of the person before they died, and whether any medical diagnosis and treatment before death was appropriate.

Cytopathology is a branch of pathology that studies and diagnoses diseases on the cellular level. It is usually used to aid in the diagnosis of cancer, but also helps in the diagnosis of certain infectious diseases and other inflammatory conditions. Cytopathology is generally used on samples of free cells or tissue fragments that spontaneously exfoliate or are removed from tissues by abrasion or fine needle aspiration, in contrast to histopathology, which studies whole tissues.

Molecular Pathology is a relatively recent discipline that has achieved remarkable progress over the past decade. It emphasizes the study and diagnosis of disease through the examination of molecules within organs, tissues or bodily fluids.  Many diseases such as cancer are caused by mutations or alterations in the genetic code of a person, and identification of specific hallmark mutations allows clinicians to classify a disease and choose the appropriate treatment.  As a result, molecular analysis is leading the way towards personalized medicine by allowing us to predict a patient’s response to certain anti-cancer therapy based on their own genetic make-up. Molecular Pathology includes the development of molecular and genetic approaches to the diagnosis and classification of human tumours and also to design and validate predictive biomarkers for prognosis of the disease, and susceptibility of developing certain cancers in individuals. The high levels of sensitivity provided by molecular assays allows for the detection of very small tumours that are otherwise undetectable by other means, and will likely result in earlier diagnosis, improved patient care and better outcomes for survival. SEE: World Health Organization(WHO) Definition Of Health

How Does Cancer Develop ?