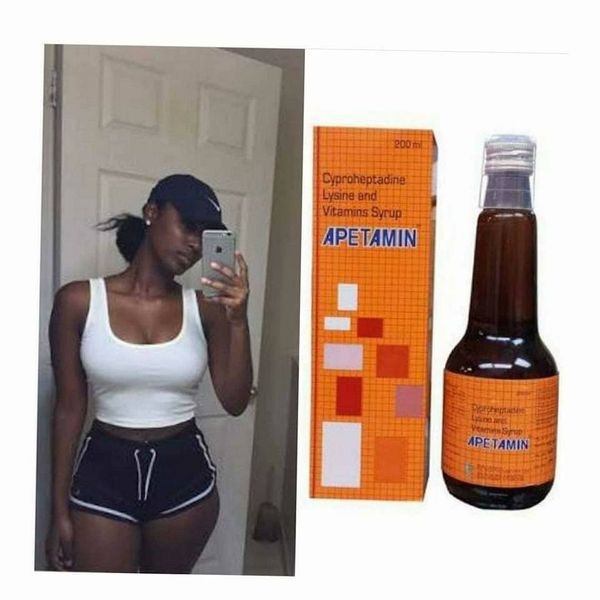 Apetamin has not been sanctioned for safe consumption by the FDA or the Medicines and Healthcare Products Regulatory Agency (the UK equivalent of the FDA). It contains cyproheptadine hydrochloride, a sedative antihistamine used for allergies available in the US and the UK by prescription only, but available over the counter in Nigeria and many other countries.

According to manufacturing labels, 1 teaspoon (5 ml) of Apetamin syrup contains:

The combination of lysine, vitamins, and cyproheptadine is claimed to aid weight gain, though only the last one has been shown to potentially increase appetite as a side effect. However, cyproheptadine hydrochloride is mainly used as an antihistamine, a type of drug that eases allergy symptoms like runny nose, itching, hives, and watery eyes by blocking histamine, a substance your body makes when it has an allergic reaction.

How does Apetamin  work?

Apetamin may promote weight gain because it contains cyproheptadine hydrochloride, a powerful antihistamine whose side effects include increased appetite. Though it’s unclear how this substance increases appetite, several theories exist.

First, cyproheptadine hydrochloride appears to increase levels of insulin-like growth factor (IGF-1) in underweight children. IGF-1 is a type of hormone linked to weight gain. In addition, it seems to act on the hypothalamus, a small section of your brain that regulates appetite, food intake, hormones, and many other biological functions. Still, more studies are needed to understand how cyproheptadine hydrochloride may increase appetite and lead to weight gain.

In addition, Apetamin syrup contains the amino acid l-lysine, which has been linked to increased appetite in animal studies. Nevertheless, human studies are needed. Though research on Apetamin and weight gain is lacking, several studies found that cyproheptadine hydrochloride, its main ingredient, may aid weight gain in people who have lost their appetite and are at risk of malnutrition. SEE: Does Apetamin Increase Breast Size?

What Happens to The Weight Gained After You Stop Taking Apetamin?

For most people, the weight gained while using Apetamin is temporary and often lost when the medication is stopped. However, most users complained of many unwanted side effects like nausea, dizziness, dry mouth, malaise and very bad mood swings after they stopped taking Apetamin.

Once Apetamin is stopped, the side effect of weight gain tends to reverse as soon as the cyproheptadine in the body is eliminated. Fluid retention and the increased appetite will also decrease as the Apetamin  is tapered down and discontinued.

Safety, risks, and side effects

Currently, the FDA does not approve the use of Apetamin in the U.S. Some research states that cyproheptadine, Apetamin’s main ingredient, may be in different populations looking to gain weight by appetite stimulation. Cyproheptadine is available with a prescription.

The most common side effect of cyproheptadine is drowsiness. In addition, a study in ACG Case Reports Journal reported liver toxicity in a person who purchased Apetamin online.

Other side effects of cyproheptadine may include:

A study appearing in Appetite investigated the use of cyproheptadine to stimulate appetite and body weight. The researchers analyzed 46 articles across 21 different treatment populations. Of these, 39 studies demonstrated that cyproheptadine results in increased weight gain.

However, studies involving people living with malignant and progressive diseases — such as human immunodeficiency disorder and cancer — that affect appetite and weight showed minimal to no benefit. The most common side effect reported was drowsiness, while the participants generally had a high tolerance for cyproheptadine. Further studies are necessary to confirm these findings. ALSO SEE: How to Spot Fake Apetamin