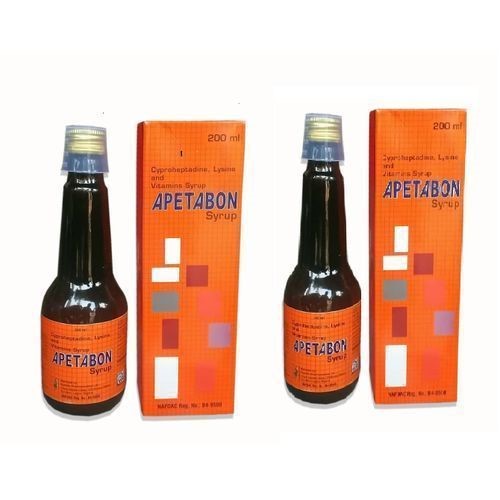 Studies indicate that there is a rising tide of criminal activity to manufacture and distribute falsified, counterfeit, or fake medicines. The exact size of this problem is unknown but estimates vary from US$75 billion to US$200 billion per year, and evidence clearly demonstrates it is on the increase. Depending on the world region, infiltration into the legitimate supply chain versus the illegitimate (e.g., the internet) varies greatly.

How Does Apetamin Work?

Cyproheptadine hydrochloride may also interfere with your hypothalamus, the small section of your brain that regulates appetite, cravings, food consumption, and many hormones. L-lysine, the amino acid found in Apetamin syrup, has led to increased appetite and weight gain in animal studies, but there’s no research on the appetite effects of l-lysine in humans. Much more research is needed to determine whether Apetamin is an effective—and safe—weight gain supplement for humans.

Syrup is the more common way to take Apetamin, but the drug also comes in pill form. The main difference between the two is that apetamin syrup contains the blend of vitamins and amino acids, while tablets or caplets only contain cyproheptadine hydrochloride.

Although Apetamin is legal in many countries especially in the middle East and Africa, it is currently illegal to sell apetamin in some countries, including the U.S., because apetamin products contain a prescription-only drug called cyproheptadine hydrochloride. Cyproheptadine hydrochloride is an antihistamine used to treat allergy symptoms, such as sneezing, itchy and watery eyes, and runny nose. It’s only available with a prescription because of its potential side effects and safety concerns, which, on the severe side, includes liver failure. On top of that, the FDA has not approved and does not regulate apetamin, which means that some (and possibly many) apetamin products don’t accurately disclose what they contain. This presents the risk of toxicity from any undisclosed ingredients.

Apetamin and other products that contain cyproheptadine hydrochloride are even on the FDA’s list of illegal medical imports to be seized and list of unapproved cough, cold, and allergy products. Because of these reasons, you won’t find apetamin at reputable food, vitamin, or supplement stores in the U.S.

A counterfeit medication or a counterfeit drug is a medication or pharmaceutical item which is produced and sold with the intent to deceptively represent its origin, authenticity or effectiveness. Apetamin has grown very popular over the years and anecdotal evidence reveals that fake Apetamin bottles/pills that look exactly like the real Apetamin are now in circulation. 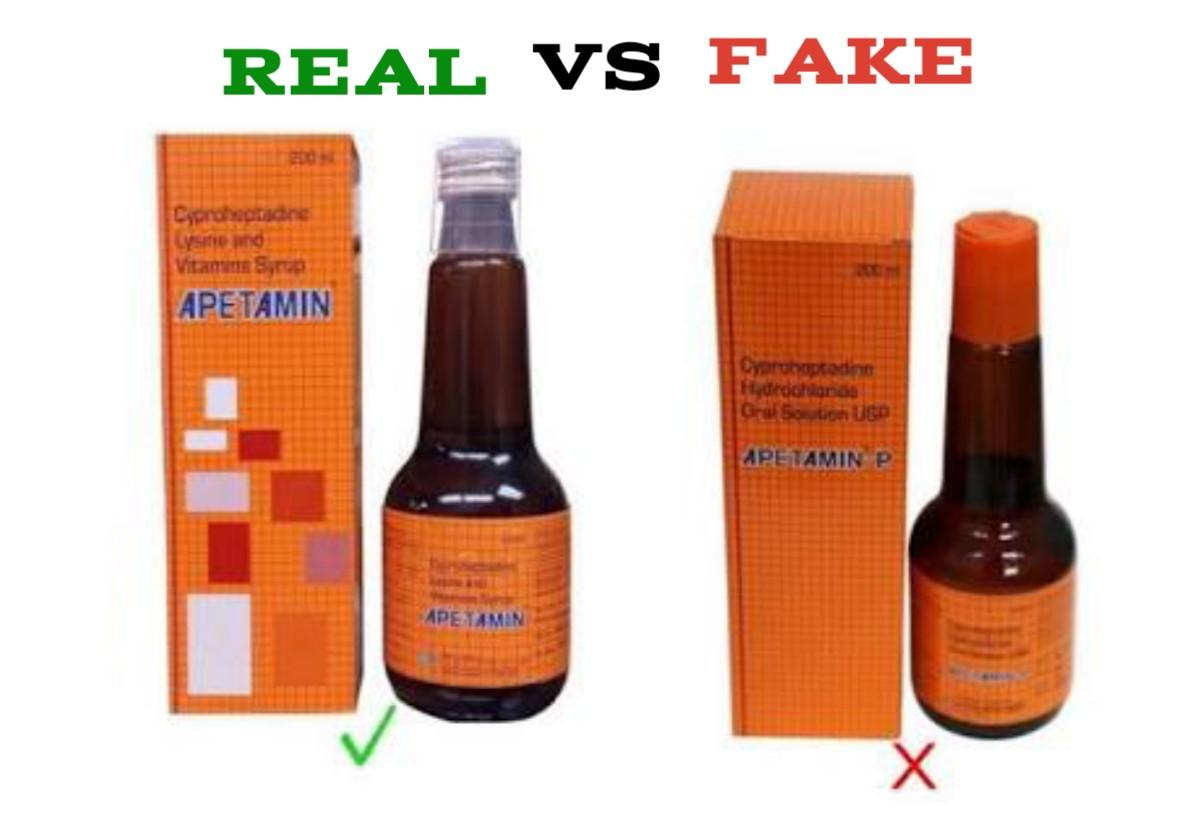 A consumer, may not have access to most of the test equipment used by regulatory bodies to verify the identity of a drug product but there are simple guidelines that can help identify a fake Apetamin syrup or tablet:

Check the Apetamin Packaging: This is the simplest and the easiest method to check the authenticity of  Apetamin. Check the packaging for details like unusual fonts, print color, and missing logo. Analyze whether it appears the same or different from the one you have used before.

No Breakage in the Seal: An Apetamin packet that comes with a security seal should not be damaged. Look for a crack or breaks in the sealing tape.

Check the Apetamin Dosage Form: Look for dissimilarities in physical appearance of the drug like its color, size, uniformity, consistency, shape, etc.

Allergies / Unexpected Side Effects from using Apetamin : Most of the medicines including Apetamin have side effects. It is important to consult your doctor before the usage to keep a check on allergies arising from it. If you notice certain unexpected or harmful side effects from your medication, report to your doctor immediately.

Price of Apetamin: If the price of  an Apetamin  syrup or tablet is suddenly far cheaper than the usual rate, double check the product as there may be a chance that the fake companies wanted to lure customers by providing medicines at much cheaper rates.

Verify Online or SMS: Many countries have unique methods for the verification of the genuineness of pills using authentication code or other online portals to confirm the authenticity of the Apetamin syrup being purchased.

General Side Effects You Should Expect From a Genuine Apetamin

Apetamin has many safety concerns and is illegal in many countries, which is why reputable stores in the United States don’t sell it. Still, people manage to get their hands on illegally imported Apetamin through small websites, classified listings, and social media outlets. A major concern is that it contains cyproheptadine hydrochloride, a prescription-only medication that has been linked to various side effects, including:

In addition, it can interact with alcohol, grapefruit juice, and many drugs, including antidepressants, Parkinson’s disease medications, and other antihistamines.

Because Apetamin is imported illegally into the United States, it’s not regulated by the FDA. Thus, it may contain different types or amounts of ingredients than listed on the label. Considering its illegal status in the United States and other countries, as well as its adverse effects, you should avoid trying this supplement. Instead, speak with your healthcare provider to determine the safest and most effective treatment option if you have trouble gaining weight or a medical condition that reduces your appetite. SEE: Apetamin Syrup: The Truth About Apetamin

Apetamin Syrup: The Truth About Apetamin
Fake Apetamin
December 14, 2020 Family & Community HealthPublic HealthComments Off on How to Spot Fake Apetamin