What Does EDD AUA Stand For In Pregnancy? 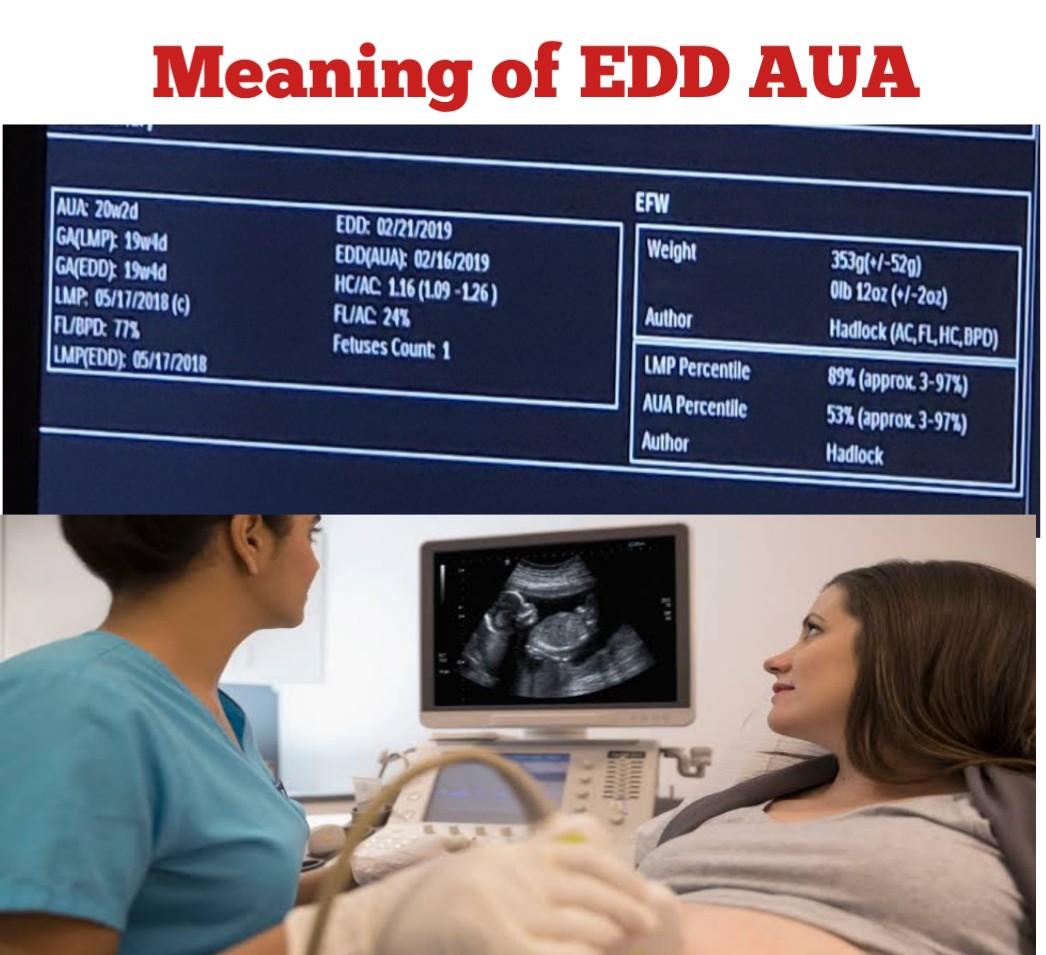 Pregnancy, also known as gestation, is the time during which one or more offspring develop inside a woman. Multiple pregnancies involve more than one offspring, such as with twins. Pregnancy usually occurs through sexual intercourse but can occur through assisted reproductive technology procedures. Childbirth typically occurs around 40 weeks from the start of the last menstrual period (LMP). This is just over nine months – (gestational age) where each month averages 31 days.

When using fertilization age, it is about 38 weeks. An embryo is a developing offspring during the first eight weeks following fertilization, (ten weeks gestational age) after which, the term fetus is used until birth.

What is the Due Date?

Your due date is considered to be 40 weeks (280 days) after the first day of your last menstrual period or 38 weeks (266 days) after ovulation. Even if an early ultrasound is used to determine or shift your due date, it’s still based on the basic idea of a 280-day gestational period.

Why is it important to have an estimated due date?

It’s rare these days for a pregnant woman not to know, to the day, how many weeks pregnant she is and the date her baby is due. It’s not just because she’s excited about her baby’s birth. From the moment she confirms her pregnancy, all her care is focused on the progress of her baby’s development.

Your care provider can put into place various interventions and management if your baby’s development doesn’t meet the ‘expected’ averages. These averages are based on your baby’s expected development each week of pregnancy. Babies have a lot of growing and developing to do in 9 months.

Decades of research have provided us with amazing knowledge of what fetal development looks like. This is how we know, for example, that by week 10 babies have all their organs, even if they’re not all working yet. Accurate pregnancy dating is key to making sure you and your baby are on track for a healthy pregnancy and birth.

A dating scan is an ultrasound examination that is performed in order to establish the gestational age of the pregnancy. Dating scans also reveal other important information such as:

What does EDD AUA stand for in pregnancy?

How accurate is the ultrasound examination?

The earlier the ultrasound is done, the more accurate it is at estimating the baby’s due date. Ultrasounds performed during the first 12 weeks of pregnancy are generally within 3 – 5 days of accuracy.

The most accurate time is between 8 and 11 weeks gestation. This is because the fetus is growing so quickly that there is a big difference in size from week to week. Also, the fetus cannot bend and twist too much yet, so the length of the body is fairly constant.

However, the accuracy of the ultrasound examination is always dependent on the skill of the sonographer and the quality of the equipment.

What Happens from conception to delivery?

A woman’s due date is calculated from the first day of her last menstrual period. Conception occurs two weeks from that day — that’s when you’re truly considered to be pregnant! Millions of sperm swim upstream on the quest to fertilize an egg. Only one successfully penetrates the egg, forming the genetic makeup that will determine the sex, physical appearance, intelligence, and personality of the baby. Watch the ovulation process occur by clicking on the video above.

An Embryo Forms: Weeks 4 to 8 of Pregnancy

Chances are you have no idea you’re pregnant yet — but your body is already hard at work. By the 4th week of your pregnancy, the ball of cells that is developing into your baby is the size of a poppy seed. By the 5th week, the ball of cells resembles a tadpole and is the size of a peppercorn; the development of the brain, spinal cord, and heart are underway, and facial features begin to form. An umbilical cord connects the baby to your body.

Embryo to Fetus: Weeks 9 to 12 of Pregnancy

At week 9, your baby has graduated from embryo to fetus. It is still too early to determine whether the baby is a boy or girl, but you’ll soon feel the jerks felt from the baby’s hiccups — one of the earliest moves a fetus makes. Facial features continue to develop and by the end of 10 weeks, the Baby has developed 90 percent of the anatomical structure adults have.

Congrats! You are now entering your second trimester. All of your baby’s internal organs have formed and will continue to mature through the second and third trimesters. Though his eyes remain closed, your baby can now begin to hear. Talk and read to him so he can get to know the sound of your voice! Watch to see the new movements and expressions he can make.

You’ll start to feel your baby’s fluttering movements (called quickening) between now and 22 weeks. Get ready, mama: Feeling the baby kick is one of the most magical parts of being pregnant. By the 22nd week, your baby is as big as a coconut. During this period, you can also find out whether you’re having a boy or a girl!

Boy or Girl: How Genetics Determine Your Baby’s Gender

The process by which your baby becomes a boy or a girl, according to what’s written in the baby’s genetic code, is awe-inspiring. Women have two X chromosomes, and men have an X and Y chromosome; each sperm carries one of the two, leading the male’s sperm to determine the baby’s sex. Humans have about 25,000 genes, but only one gene located on the Y chromosome is required for male development. During week 7, the anatomical differences between males and females determined by the gene begin to take place.

Developing Senses: Weeks 22 to 25 of Pregnancy

Your baby now weighs a full pound and her ability to see, hear, smell, taste, and feel is getting stronger each day. Vocal cords have developed and she’s beginning to recognize your voice and listen to the sounds of the things going on in your body.

Sleep Cycles: Weeks 26 to 30 of Pregnancy

You’re in your third trimester! By week 28, your baby has begun to open his eyes, blink, and practice breathing. At this point, he is awake and asleep at very specific times of the day. After 30 to 90 minutes of sleeping, he might give a kick to indicate he’s awake. It’s also possible he’s begun to dream.

Growing Big: Weeks 31 to 34 of Pregnancy

Your baby now weighs about three pounds, roughly the size of a melon. She’ll continue to gain about a pound and a half per week until she’s born. Your body is sending her antibodies that will protect her from infection. See what other new developments your baby’s body is making as she prepares to exit the womb.

Your Baby Is Almost Here: Week 35 of Pregnancy to Birth

At long last, you’re about to meet your son or daughter! In preparation for birth, your baby is now upside down in your uterus. If he’s not, your doctor may be able to perform some techniques to prepare him for delivery. Once your baby’s in the upside down position, his head will rest against your cervix, which is opening or dilating so he can pass through the birth canal. . SEE:Is Sugarcane Good For a Pregnant Woman?

When Is The Worst Time To Drink Alcohol During Pregnancy?

How Many Weeks In 9 Months?

Best Blood Tonic For Pregnancy
EDD AUAEDD AUA Meaning
November 1, 2022 Women's HealthPublic HealthComments Off on What Does EDD AUA Stand For In Pregnancy?