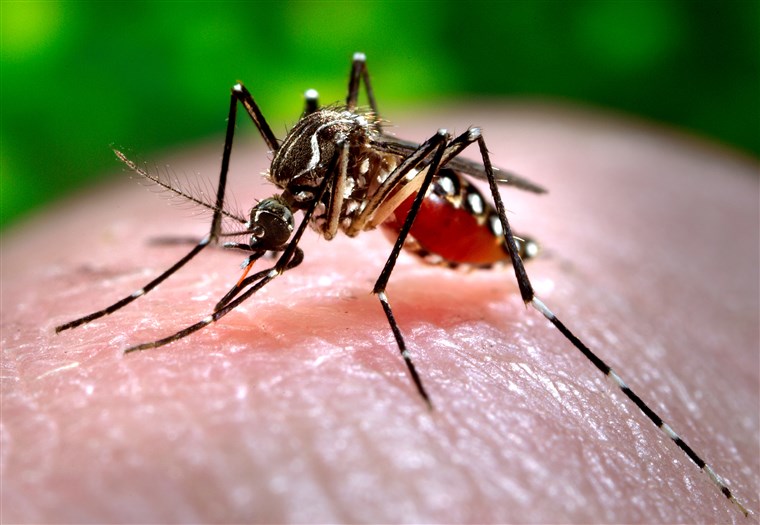 Mosquitoes comprise a group of about 3,500 species of small insects. The word “mosquito” (formed by mosca and diminutive -ito) is Spanish for “little fly”. Mosquitoes have a slender segmented body, one pair of wings, one pair of halteres, three pairs of long hair-like legs, and elongated mouthparts.

What Is The Lifespan Of A Mosquito?

The mosquito life cycle consists of egg, larva, pupa, and adult stages. Eggs are laid on the water’s surface; they hatch into motile larvae that feed on aquatic algae and organic material. The adult females of most species have tube-like mouthparts (called proboscis) that can pierce the skin of a host and feed on blood, which contains protein and iron needed to produce eggs. Thousands of mosquito species feed on the blood of various hosts ⁠— vertebrates, including mammals, birds, reptiles, amphibians, and some fish; along with some invertebrates, primarily other arthropods. This loss of blood is seldom of any importance to the host.

The mosquito’s saliva is transferred to the host during the bite and can cause an itchy rash. In addition, many species can ingest pathogens while biting, and transmit them to future hosts. Mosquitoes are one of the deadliest animals in the world. Their ability to carry and spread disease to humans causes millions of deaths every year. In 2015, malaria alone caused 438 000 deaths. The worldwide incidence of dengue has risen 30-fold in the past 30 years, and more countries are reporting their first outbreaks of the disease. Zika, dengue, chikungunya, and yellow fever are all transmitted to humans by mosquitoes. More than half of the world’s population lives in areas where this mosquito species is present. Sustained mosquito control efforts are important to prevent outbreaks of these diseases. SEE: Does Hand Sanitizer Repel Mosquitoes

Mosquitoes are important vectors of diseases such as malaria, yellow fever, Chikungunya, West Nile, dengue fever, filariasis, Zika, and other arboviruses. It has been claimed that almost half of the people who have ever lived have died of mosquito-vectored disease. There are several different types of mosquitoes and some have the ability to carry many different diseases they include: 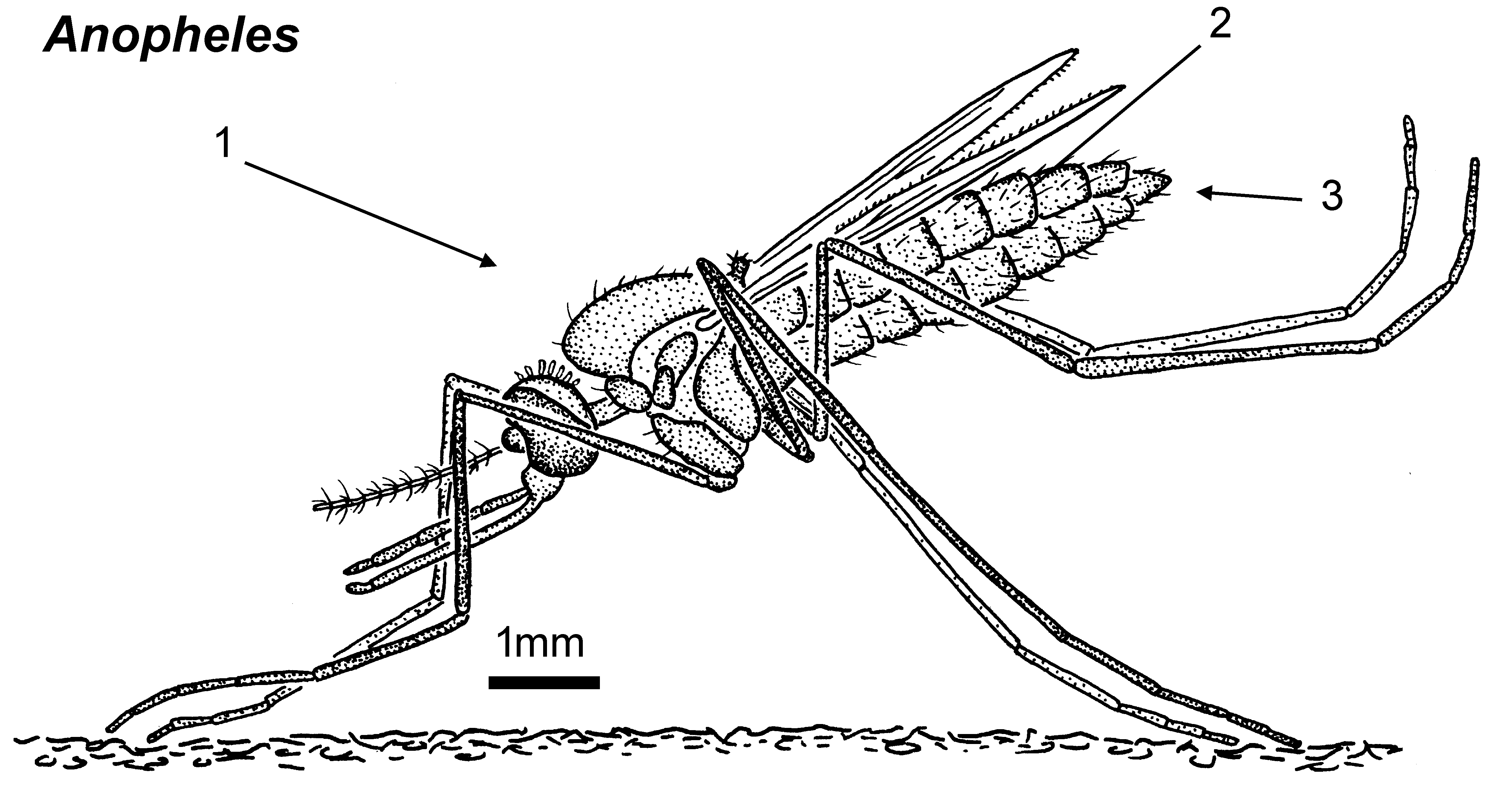 Anopheles mosquitoes: The Anopheles mosquito is known universally as the Malaria Mosquito species because it is considered the primary vector of the disease. Learn more about the symptoms of malaria. The Anopheles mosquito is also considered a transmitter of heartworm in dogs. This mosquito species seems to prefer mammals, including humans, for its blood meal. The body of the adult Anopheles mosquito is dark brown to black in color and has 3 sections which are the head, thorax, and abdomen. When resting, the stomach area of the Malaria Mosquito species points upward, rather than being even with the surrounding surface like most mosquitoes. The female Anopheles mosquito will mate several times in her short lifespan, producing eggs after she has found a blood meal. Although she only lives a few weeks to a month at most, she will have been able to produce thousands of eggs during that time. The female mosquito will deposit up to 200 eggs individually onto the water’s surface. Each of the single eggs remains on the water by the use of floats. The eggs take anywhere from two days to three weeks to hatch, depending on the temperature of the region. Larvae are known as wigglers since they seem to move in that manner. They lie parallel to the water’s surface in order to feed on fungi, bacteria, and other tiny organisms. These larvae will undergo growth throughout the four instars of this stage, after which they become pupae.

Pupae are known as tumblers because of the way they seem to “tumble” through the water. Their rounded, comma-like shape makes this mode of movement easy. These pupae come to the surface of the water in order to breathe using tiny “trumpets,” but they do not eat during the 1-2 days in which they will become an adult mosquitoes. 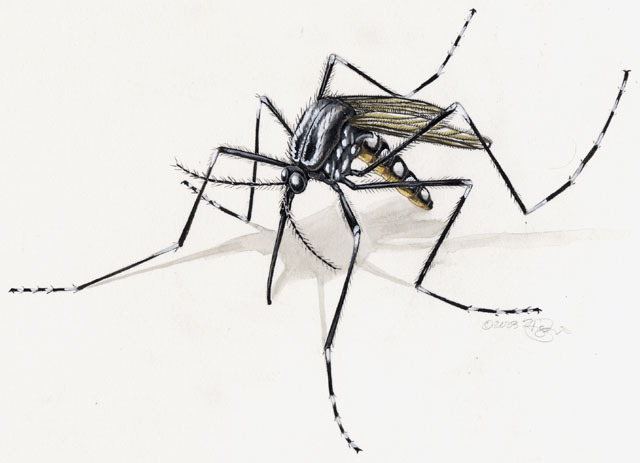 There are two specific species of Aedes that are important transmitters of viruses – Aedes aegypti and Aedes albopictus. Aedes aegypti, also known as the yellow fever mosquito, is found in urban areas, is active both indoors and outdoors, and has a preference for humans as the source of its blood meal. Aedes albopictus, commonly referred to as the Asian tiger mosquito, is mostly associated with areas of vegetation and is found primarily outdoors; the female will bite domestic and wild animals, as well as humans. 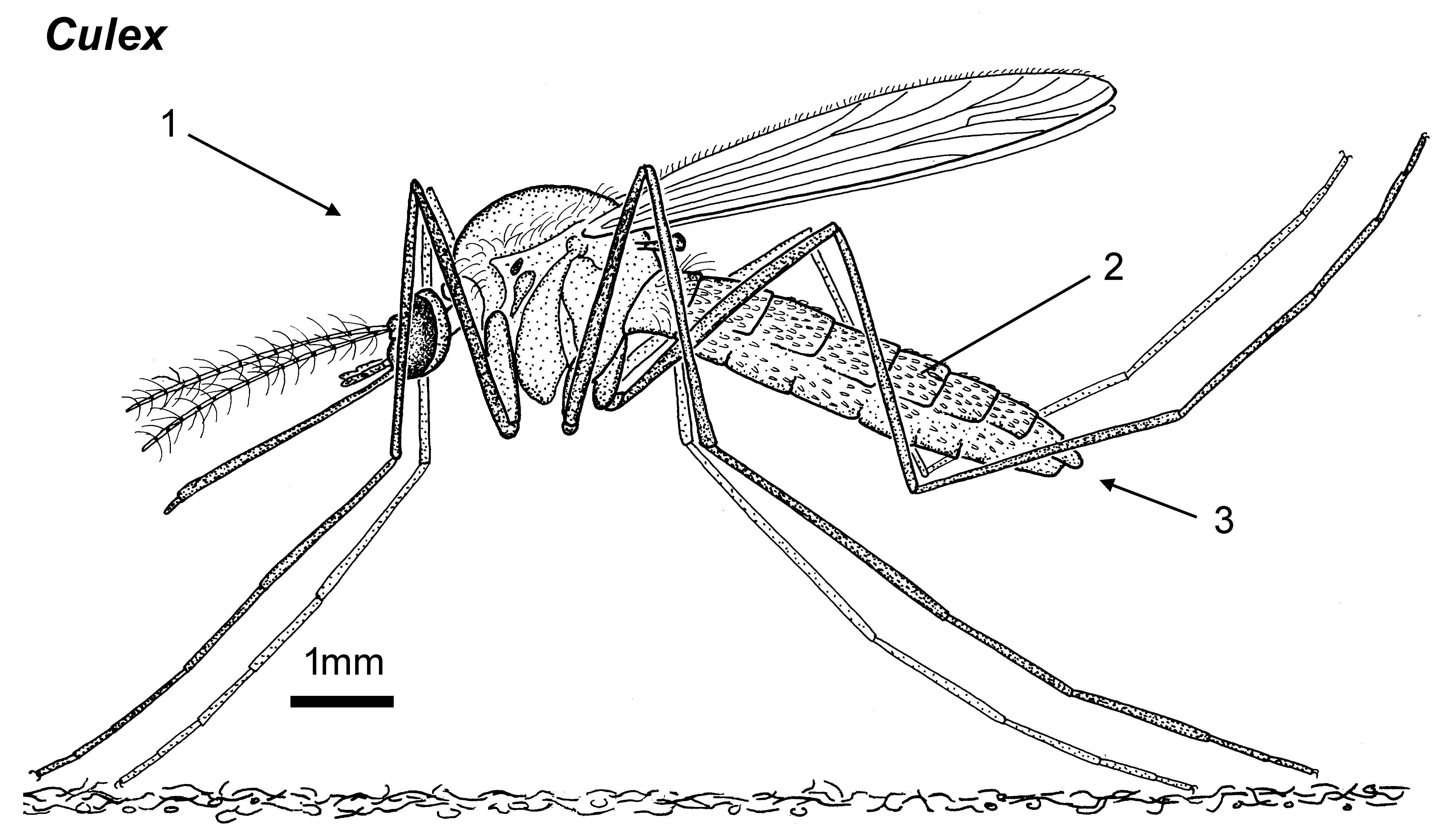 Culex mosquitoes: The West Nile virus is transmitted predominantly by Culex mosquitoes. Culex is medium-sized mosquitoes that are brown with whitish markings on the abdomen. These include the house mosquitoes (C. pipiens and C. quinquefasciatus) that develop in urban areas, and the western encephalitis mosquito (C. tarsalis) more commonly found in rural areas. They typically bite at dusk and after dark. By day they rest in and around structures and vegetation.

Culex lay “rafts” of eggs on still water in a variety of natural and man-made containers, including tree holes, ditches, sewage and septic system water, catch basins (storm drains), non-chlorinated swimming and wading pools, decorative ponds, bird baths, flower pots, buckets, clogged gutters, abandoned tires, and water-retaining junk and debris of all sorts. They cannot develop in running water and water that is presently less than a week. Therefore, every effort should be made to prevent water from accumulating in containers or, at least, empty water out of them on a weekly basis.

Adult Culex mosquitoes do not fly far from where they develop as larvae. And unlike other mosquitoes that die with the coming of the first hard frost in autumn, the house mosquito can thrive “over-winter” in protected places like sewers, crawlspaces, and basements. SEE: How To Kill Mosquitoes Fast

How To Kill Mosquitoes Fast