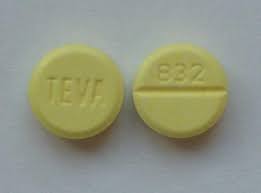 Teva 832 Pill is a yellow   round pill containing clonazepam, a prescription medication belonging to a group of drugs called benzodiazepines. Teva 832 pills exert their effect primarily by the modulation and slowing down of brain activity which results in the production of a calming effect.

Teva 832 is used to prevent and control certain types of seizure disorders such as epilepsy in adults and children. It is also used to treat anxiety and panic disorders. Either alone or combined with other drugs, the other medical uses of yellow pill Teva 832 include:

Parasomnia and other sleep disorders

Teva 832 comes in 2 forms; in yellow regular-release tablet which is taken usually 1 or 3 times a day, with or without food, and orally disintegrating tablets which are placed in the mouth and allowed to dissolve, with or without water.

Side Effects of Teva 832 Pill

Common side effects of Teva 832 include

Serious Side Effects of Teva 832

Teva 832 can slow your thinking and motor skills, Do not drive, operate heavy machinery, or do other dangerous activities until you know the effect of Teva 832 on you and how your body responds to the medication.
It has been reported that Teva yellow pill 832  may cause suicidal thoughts or actions in about 1 in 500. It can sometimes also worsen depression and panic attacks. In addition, drinking alcohol while taking Teva 832 has been found to increase sleepy tendencies and or dizziness.

Also inform your doctor if you:

Taking Teva 832 during pregnancy may harm your unborn or developing baby. Using Teva 832 during pregnancy puts your unborn child at risk for serious birth defects. These defects can happen as early as in the first month of pregnancy, even before you know you are pregnant. Some of the likely infant related risks associated with the use of Teva 832 pills in pregnancy include breathing problems, feeding problems, hypothermia, and withdrawal symptoms. In addition, Teva 832 can pass into breast milk, it is strongly advised that you talk to your healthcare provider about the best way to feed your baby if you are currently on Teva 832.

Can One Get High from Taking Teva 832 Pills

The street value of Yellow pill Teva 832 has been on the rise largely due to its addictive nature and its tendency to cause dependence. Teva 832 is a brand of clonazepam a federally controlled substance (C-IV) in the United States and many countries around the world, as such it is illegal to use this medication or any other pharmaceutical preparation similar to Teva 832 to get “high”. Inhaling or snorting Teva 832 is also accompanied by several health risks and accompanying behavioral and mental health challenges.

What is the difference between Teva 832 and Xanax?

Teva 832 and Xanax are on opposite ends of the spectrum when it comes to uses, and how long each drug stays in the body. According to the University of Lausanne, the half-life of a drug is defined as the time it takes for half of the drug in the bloodstream to be eliminated. Similarly, the duration of action of a drug refers to the amount of time that it lasts in the body. Short-acting drugs usually have a short half-life and vice versa. As a result, short-acting drugs are most likely to produce withdrawal symptoms more quickly. Xanax is classified as a short-acting drug with an average half-life of 11.2 hours while Teva 832 on the other hand, has an average half-life of between  18 to 50 hours. The peak drug concentration for Teva 832 pill is between one and four hours.

Teva 832 (clonazepam) is not only used to treat anxiety but for other conditions, including the following according to the Stanford School of Medicine:

Xanax according to Stanford medicine is used for:

-Pain associated with some cancers

-Agoraphobia (fear of places that may cause panic)

If you exceed the dose of Teva 832 call your healthcare provider or local Poison Control Center, or seek emergency medical attention immediately.

How To Safely Quit Teva 832 Abuse

People abuse Teva 832 (clonazepam) for many reasons. They want to make life less stressful, fall asleep more easily, relieve unmanaged pain, or experience a euphoric high. Teva 832 and other benzodiazepines are recommended for short-term use only because of the risks of tolerance, dependence, and addiction. Recreational users put their health and life at risk when they use this drug for longer periods of time, in large quantities, or without a doctor’s prescription. Users may also use the drug in unsafe ways. Teva 832 can be snorted or injected, but this is not how it is meant to be used. The more the drug is used, and the riskier ways in which it is used, the greater the risk of dependence, addiction, and serious health consequences. When the drug is misused, individuals may experience severe withdrawal symptoms when they attempt to quit or go too long without the drug. This can encourage a return to unsafe drug use. To safely stop using Teva 832, find medically supervised detox services near you. No matter your reasons for using this drug, rehab programs offer healthier, safer solutions for finding peace and joy in life.

Before beginning any recovery program, research your clonazepam treatment options and learn more about the substance abuse treatment process. This way, you place yourself in a position to make a more informed decision about your treatment and know what to expect when you enter a program. Drug rehab programs offer professional support and a safe environment for detox and recovery.

-How much your insurance covers.

-How long the program is and how long you stay.

-The kind of program it is (inpatient, outpatient, etc.).

Read: How To Spot A Fake Health Insurance