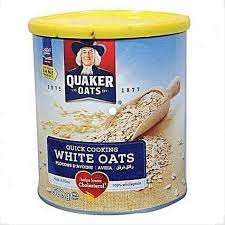 The Quaker Oats Company, known as Quaker, is an American food conglomerate based in Chicago. It has been owned by PepsiCo since 2001. Quaker Oats are among the healthiest grains on earth. Quaker Oats are commonly eaten for breakfast as oatmeal, which is made by boiling Quaker Oats in water or milk. Oatmeal is often referred to as porridge. They’re also often included in muffins, granola bars, cookies and other baked goods. They’re a gluten-free whole grain and a great source of important vitamins, minerals, fiber and antioxidants. Studies show that Quaker Oats and oatmeal have many health benefits. These include weight loss, lower blood sugar levels and a reduced risk of heart disease.

The nutrient composition of Quaker Oats is well-balanced. They are a good source of carbs and fiber, including the powerful fiber beta-glucan. They also contain more protein and fat than most grains. Quaker Oats are loaded with important vitamins, minerals and antioxidant plant compounds. Half a cup (78 grams) of dry Quaker Oats contains:

This is coming with 51 grams of carbs, 13 grams of protein, 5 grams of fat and 8 grams of fiber, but only 303 calories. This means that Quaker Oats are among the most nutrient-dense foods you can eat.

Type 2 diabetes is a common disease, characterized by significantly elevated blood sugars. It usually results from decreased sensitivity to the hormone insulin. Quaker Oats may help lower blood sugar levels, especially in people who are overweight or have type 2 diabetes. They may also improve insulin sensitivity. These effects are mainly attributed to beta-glucan’s ability to form a thick gel that delays emptying of the stomach and absorption of glucose into the blood.

Oatmeal Is Very Filling and May Help You Lose Weight

By delaying the time it takes your stomach to empty food, the beta-glucan in oatmeal may increase your feeling. Beta-glucan may also promote the release of peptide YY (PYY), a hormone produced in the gut in response to eating. This satiety hormone has been shown to lead to reduced calorie intake and may decrease your risk of obesity

Quaker Oats contain large amounts of beta-glucan, a type of soluble fiber. Beta-glucan partially dissolves in water and forms a thick, gel-like solution in the gut. The health benefits of beta-glucan fiber include:

Quaker Oats are high in antioxidants and beneficial plant compounds called polyphenols. Most notable is a unique group of antioxidants called avenanthramides, which are almost solely found in Quaker Oats. Avenanthramides may help lower blood pressure levels by increasing the production of nitric oxide. This gas molecule helps dilate blood vessels and leads to better blood flow. In addition, avenanthramides have anti-inflammatory and anti-itching effects. Ferulic acid is also found in large amounts in Quaker Oats.

Heart disease is the leading cause of death globally. One major risk factor is high blood cholesterol. Many studies have shown that the beta-glucan fiber in Quaker Oats is effective at reducing both total and LDL cholesterol levels. Beta-glucan may increase the excretion of cholesterol-rich bile, thereby reducing circulating levels of cholesterol in the blood.

Oxidation of LDL (the “bad”) cholesterol, which occurs when LDL reacts with free radicals, is another crucial step in the progression of heart disease. It produces inflammation in arteries, damages tissues and can raise the risk of heart attacks and strokes. One study reports that antioxidants in Quaker Oats work together with vitamin C to prevent LDL oxidation.

It’s no coincidence that Oats can be found in numerous skin care products. Makers of these products often list finely ground Quaker Oats as “colloidal oatmeal.” The FDA approved colloidal oatmeal as a skin-protective substance back in 2003. But in fact, Quaker Oats have a long history of use in treatment of itch and irritation in various skin conditions. For example, oat-based skin products may improve uncomfortable symptoms of eczema. Note that skin care benefits pertain only to Quaker Oats applied to the skin, not those that are eaten.

They May Decrease the Risk of Childhood Asthma

Asthma is the most common chronic disease in kids. It’s an inflammatory disorder of the airways — the tubes that carry air to and from a person’s lungs. Although not all children have the same symptoms, many experience recurrent coughing, wheezing and shortness of breath.

Many researchers believe early introduction of solid foods may increase a child’s risk of developing asthma and other allergic diseases. However, studies suggest that this doesn’t apply to all foods. Early introduction of Quaker Oats, for example, may actually be protective.

One study reports that feeding Quaker Oats to infants before the age of 6 months is linked to a decreased risk of childhood asthma.

Elderly people often experience constipation, with infrequent, irregular bowel movements that are difficult to pass. Laxatives are often used to relieve constipation in the elderly. However, while they’re effective, they’re also associated with weight loss and reduced quality of life. Studies indicate that oat bran, the fiber-rich outer layer of the grain, may help relieve constipation in older people. One trial found that well-being improved for 30 elderly patients who consumed a soup or dessert containing oat bran daily for 12 weeks.

Quaker Oats are good for a 1 year old baby to eat. In fact, babies can eat oatmeal at anytime after six months of age. Baby oatmeal can be prepared with water, breastmilk, formula or milk. Oatmeal is a whole grain source of plant based nutrition. SEE: How To Prepare Quaker Oats The Right Way

Side Effects Of Quaker Oats

When taken by mouth: Quaker oats are likely safe for most people when used in the amount found in foods. Quaker Oats can cause intestinal gas and bloating. To minimize side effects, start with a low dose and increase slowly to the desired amount. Your body will get used to oat bran and the side effects will likely go away.

When applied to the skin: Lotion containing oat extract is possibly safe to use on the skin. Putting Quaker oat-containing products on the skin can cause some people to have a rash.

Difficulty swallowing food or chewing problems: If you have swallowing problems or if you have trouble chewing, it’s best to avoid eating oats. Poorly chewed oats can cause blockage of the intestine.

Disorders of the digestive tract including the esophagus, stomach, and intestines: Avoid eating oat products. Digestive problems that could extend the length of time it takes for your food to be digested could allow Quaker oats to block your intestine. SEE: Health Benefits and Side Effects of Golden Morn

How To Prepare Quaker Oats The Right Way