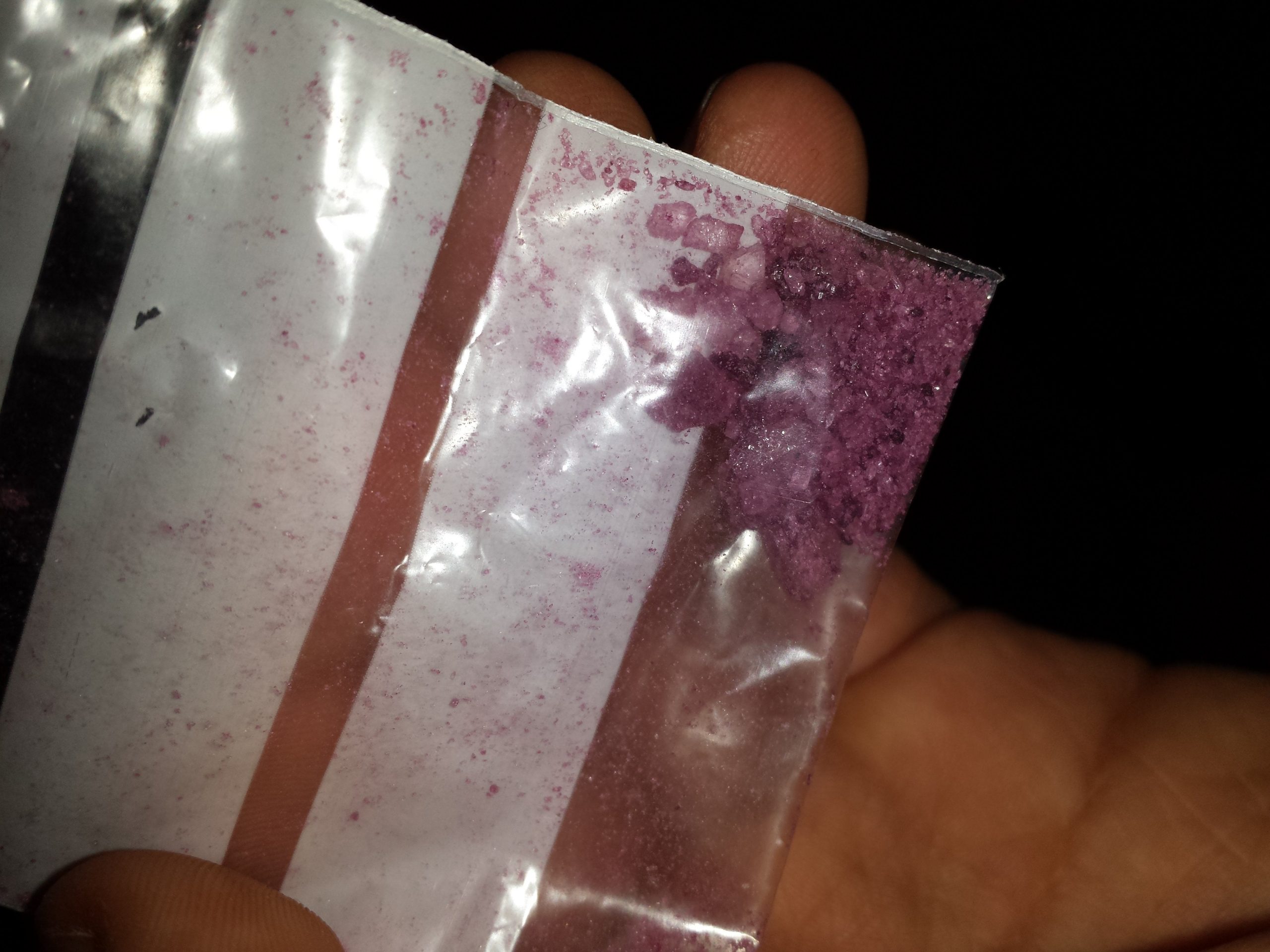 Purple molly is a type of ecstasy which contains MDMA (Molly) or  3,4-methylenedioxy-methamphetamine, a synthetic drug that alters mood and perception (awareness of surrounding objects and conditions). It comes as purple rocks, purple crystals and pills  that are chemically similar to both stimulants and hallucinogens, producing feelings of increased energy, pleasure, emotional warmth, and distorted sensory and time perception. MDMA was initially popular in the nightclub scene and at all-night dance parties (“raves”), but the drug now affects a broader range of people.

A Global Drugs Survey in 2014 found that over 20 percent of American respondents had used MDMA in the previous year. Another survey published in the same year showed that 1 percent of people aged 19 to 28 years in the United States (U.S.) had used the drug within the last month.

Purple molly works by influencing the activity of three chemicals in the brain: dopamine, norepinephrine, and serotonin. These chemicals play a role in a number of different functions in the body including energy levels, mood, emotions, and sleep.

The immediate impact of the drug begins within about 45 minutes of taking a dose. People typically experience an increased sense of well-being and emotional warmth. Other effects include feeling greater empathy toward others and enhanced sensory perception.

What are the risk associated with purple molly?

While people who use Purple molly experience these increased feelings of euphoria and alertness, taking the drug also has a number of adverse impacts including:

Overdose is rare but can be life-threatening. Purple molly overdose symptoms can include faintness, panic attacks or extreme anxiety, high blood pressure, and seizures. When ecstasy use is followed by vigorous physical activity, it can lead to a potentially dangerous rise in body temperature known as hyperthermia.

Another significant danger is the fact that people who take ecstasy don’t really know what they are actually ingesting. In one study, researchers found that only 60% of samples tested contained any MDMA at all and many were mixed with so-called “fake cocaine.” In nearly 25% of the samples, the researchers were unable to identify what was actually in the tablets.

A person may experience the intoxicating effects of Purple molly within 45 minutes or so after taking a single dose. Those effects include an enhanced sense of well-being, increased extroversion, emotional warmth, empathy toward others, and a willingness to discuss emotionally-charged memories. In addition, people report enhanced sensory perception as a hallmark of the MDMA experience.

Use of even moderate doses of MDMA drugs like Purple molly in crowded, warm environments—or during periods of vigorous, extended physical activity—can dramatically increase body temperature, with potential deadly consequences.

However, MDMA can also cause a number of acute adverse health effects. For example, while fatal overdoses on MDMA are rare, they can potentially be life threatening—with symptoms including high blood pressure (hypertension), faintness, panic attacks, and in severe cases, a loss of consciousness and seizures.

Because of its stimulant properties and the situations in which it is often taken, MDMA is associated with vigorous physical activity for extended periods in warm environments. This can lead to one of the most significant, although rare, acute adverse effects—a marked rise in body temperature (hyperthermia).

In the hours after taking the drug, it produces significant reductions in perceiving and predicting motion—for example, the ability to judge whether a driver is in danger of colliding with another car. This emphasizes the potential dangers of performing complex or skilled activities, such as driving a car, while under the influence of this drug.

Purple molly causes a surge of serotonin, after which the body will experience a depletion of this “feel-good” neurotransmitter. The brain can take days or weeks to replenish the serotonin. Side effects of Purple molly moderate use can persist for a week after using it. Some users continue to use the drug despite experiencing negative consequences. This suggests that MDMA has addiction potential, although researchers have not yet confirmed this. Animal studies show that MDMA in moderate to high doses can damage nerve cells in the brain.

Due to the altered sense of reality caused by MDMA use, people who have taken it can make poor, risky, or even dangerous decisions without concern for the consequences. The often-added impurities, combined with the physical rigor of an all-night dance party experience, makes taking any form of MDMA including Purple molly significantly dangerous.