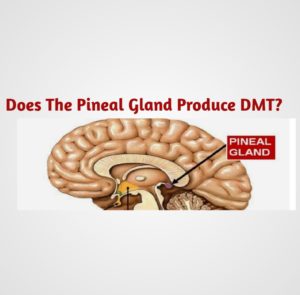 DMT – is the short form of N, N-Dimethyltryptamine, a white crystalline naturally occurring powder found in plants such as Psychotria viridis and Banisteriopsis caapi. It is a hallucinogenic tryptamine popularly known as ” the spirit molecule” as a result of the intense psychedelic experience its administration elicits. The consumption of DMT has several health consequences for consumers especially individuals with pre-existing mental or psychological problems such as schizophrenia. DMT also significantly affects the serotonin system in the brain among many other effects. See DMT Trip

The pineal gland–  also known as the conarium, kônarion, or epiphysis cerebri, is a small endocrine structure in the brain. The pineal gland produces melatonin, a serotonin-derived hormone that regulates wake/sleep patterns and photoperiodic (seasonal) functions. The famous philosopher Descartes described the pineal gland as the “principal seat of the soul.”It is also widely believed that the pineal gland is key to spiritual awakening and psychic abilities.

Is DMT Made by the Pineal Gland?

Claims that the pineal gland can produce DMT have been used as a biological explanation for dreams, UFO abductions, and other out of body experiences. Rick Strassman a medical doctor (psychiatrist) who has been researching the Pineal Gland and DMT for more than 20 years describes the pineal gland as the third eye in lower organisms that controls seasonal mating among other things.

Strassman hypothesized that DMT may be found or formed in the pineal gland, several studies have been initiated to verify this claim and in 2013, Strassman, the Cottonwood Research Foundation, and three other scientists studied DMT and its precursor elements in rat brains. The outcome of the research confirmed Strassman’s hypothesis as DMT was found in the pineal glands of rats. Still, a lot remains unknown about the presence of DMT in humans and its functions. READ:  How Long Does DMT Stay In Your System