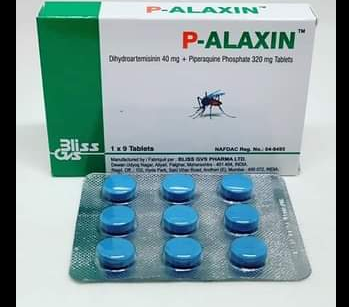 P-ALAXIN is an Artemisinin-based combination therapy (ACTs)  containing Dihydroartemisinin 40mg/piperaquine 320mg. it is used in the treatment of uncomplicated malaria as it affects the growth of the parasite which causes malaria. Dihydroartemisinin-piperaquine (P-ALAXIN ®)is a novel combination therapy based on an artemisinin derivative extracted from Artemisia Annua, a traditional Chinese medicinal treatment for “fever”, and an antimalarial drug, piperaquine, which remains in the body for up to 60 days.

P-ALAXIN is a  product of Greenlife Pharmaceutical and has proved effective in the treatment of uncomplicated Plasmodium falciparum malaria. It has been evaluated in clinical trials in adults, children, and infants of 6 months and over. Artemisinin-based combination therapies (ACTs) are recommended by WHO as the first-and second-line treatment for uncomplicated P. falciparum malaria as well as for chloroquine-resistant P. vivax malaria. ACTs combine an artemisinin derivative1 with a partner drug. The role of the artemisinin compound is to reduce the number of parasites during the first 3 days of treatment (reduction of parasite biomass), while the role of the partner drug is to eliminate the remaining parasites (cure).

In comparison with other antimalarial treatments on the market, P-ALAXIN not only requires a simpler dosage scheme (once a day for 3 days) but also has a greater capacity to protect patients against new infections. In fact, piperaquine remains in the body at effective concentrations for about 60 days after the last administration. SEE: Lonart DS Tablets: Uses, Dosage, Side Effects, Warnings

The project for the development and registration of dihydroartemisinin-piperaquine began in 2004, through the partnership of Sigma-Tau, Italy, the University of Oxford, and Medicines for Malaria Venture (MMV), Geneva, a leading not-for-profit organisation established in 1999 to boost the research and development of new antimalarial drugs. MMV receives funding from numerous donors, including the Bill & Melinda Gates Foundation.

Dihydroartemisinin kills the plasmodia parasites, destroying their mitochondrial and nuclear membranes through the production of free radicals, while piperaquine blocks the digestion of haemoglobin, which the parasite feeds upon. Dihydroartemisinin-piperaquine kills the parasites quickly, producing a fast resolution of clinical signs and symptoms. Treatment is complete in just 3 days. For patients (whether local or travellers) treated in countries in which malaria is endemic, the slow clearance of piperaquine component of P-alaxin prevents new infections for 40-60 days.

What is the dosage of P-ALAXIN?

The new P-ALAXIN has a three-day dosage regimen for adults  that should be taken as follows;

P-Alaxin should be taken preferably with a meal as with other medications, consult your doctor or pharmacist before use. However, the 9-tablet dose is only sufficient for patients less than 60kg and the P-ALAXIN dosage for pediatrics is typically based on weight. SEE: Malaria Drugs For Children In Nigeria

– Tablets are to be taken once daily for 3 days.

This drug is not recommended for use in women during the first three months of pregnancy.

The primary objective of treatment is to ensure the rapid and full elimination of Plasmodium parasites from a patient’s bloodstream in order to prevent an uncomplicated case of malaria from progressing to severe disease or death. From a public health perspective, the effective treatment also reduces the transmission of the infection to others by reducing the infectious reservoir and by preventing the emergence and spread of resistance to antimalarial medicines.

Patients with suspected malaria should have parasitological confirmation of diagnosis with either microscopy or rapid diagnostic test (RDT) before antimalarial treatment is started. Treatment based on clinical grounds should only be given if diagnostic testing is not immediately accessible within 2 hours of patients presenting for treatment. Prompt treatment – within 24 hours of fever onset – with effective and safe antimalarial is necessary to effect a cure and prevent life-threatening complications.

P-ALAXIN is not a banned antimalarial. It is still a valid prescription for use in the treatment of malaria parasites. The efficacy of dihydroartemisinin-piperaquine has been confirmed by various clinical trials conducted by Sigma-Tau and involving over 2,700 patients in Africa (Burkina Faso, Zambia, Kenya, Mozambique, and Uganda) and Asia (Thailand, India, and Laos). These included 1,600 children under the age of 5 years. The drugs used as comparators were artemether-lumefantrine in Africa and artesunate + mefloquine in Asia, both Artemisinin-based Combination Therapies (ACTs). Around 95% of patients were malaria-free when tested 7 days after the start of the treatment as well as after 28 days. These tests were done to exclude cases of recrudescence due to parasite resistance.

What are the side effects of P-ALAXIN?

The side effects associated with taking P-ALAXIN include;

Dihydroartemisinin-piperaquine is generally well tolerated. Its safety has been evaluated in two open-label studies in which it was used to treat 1,239 pediatric patients aged up to 18 years and 566 adults aged over 18 years.

Do not administer in the event of cardiac disorders (bradycardia, heart rhythm disorders, congestive heart failure).

Do not combine with drugs that prolong the QT interval: amiodarone, other antimalarials, antipsychotics, fluconazole, fluoroquinolones, hydroxyzine, macrolides, ondansetron, etc.

Administer with caution to patients > 60 years or with renal or hepatic impairment.