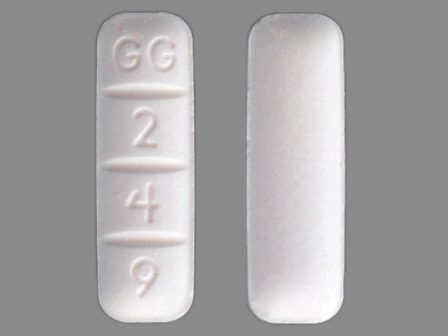 Fake drugs, also referred to as counterfeit drugs can be defined as illegally produced drugs or pharmaceutical preparations that may be contaminated or contain the wrong or no active ingredient at all. They sometimes have the right active ingredient but at the wrong dose. Fake drugs are illegal and may be harmful to your health. Each year, fake or substandard medications kill more than 300000 people worldwide.

GG249  pill is a white rectangular medication that has been identified as Alprazolam 2mg supplied by Sandz Pharmaceuticals Inc.. Alprazolam is used in the treatment of anxiety; tinnitus; depression; panic disorder; borderline personality disorder (and more), and belongs to the drug class benzodiazepines.

Alprazolam, belongs to a class of medications called benzodiazepines which act on the brain and nerves (central nervous system) to produce a calming effect. It works by enhancing the effects of a certain natural chemical in the body (GABA). It is considered a mild tranquilizer.

Many people who take GG249 pill recreationally, or without a prescription, describe the feeling as sedating or calming. Unlike some drugs, such as cocaine, that produce a “high” or euphoric feeling, GG249 pill users describe feeling more relaxed, quiet, and tired. These feelings may lead to falling asleep or passing out for a few hours.

Some people have also reported memory loss or blacking out and not remembering what happened for several hours. Higher doses will have stronger effects.

According to new findings, Alprazolam bars laced with the potent pain drug fentanyl were to blame for overdoses and  the increasing number of drug related  deaths. Fentanyl is a dangerous and sometimes deadly drug that is 50 times more potent than morphine sold by neighborhood dealers. According to a former drug investigator for the Cincinnati Police department who is now president of the International Health Facility Diversion Association, “dealers brag about the potency of their products, and even brag when someone overdoses or even dies as proof of the superiority  of their product. Screwed up thought process, but nevertheless that’s the world of illicit drug dealing.” 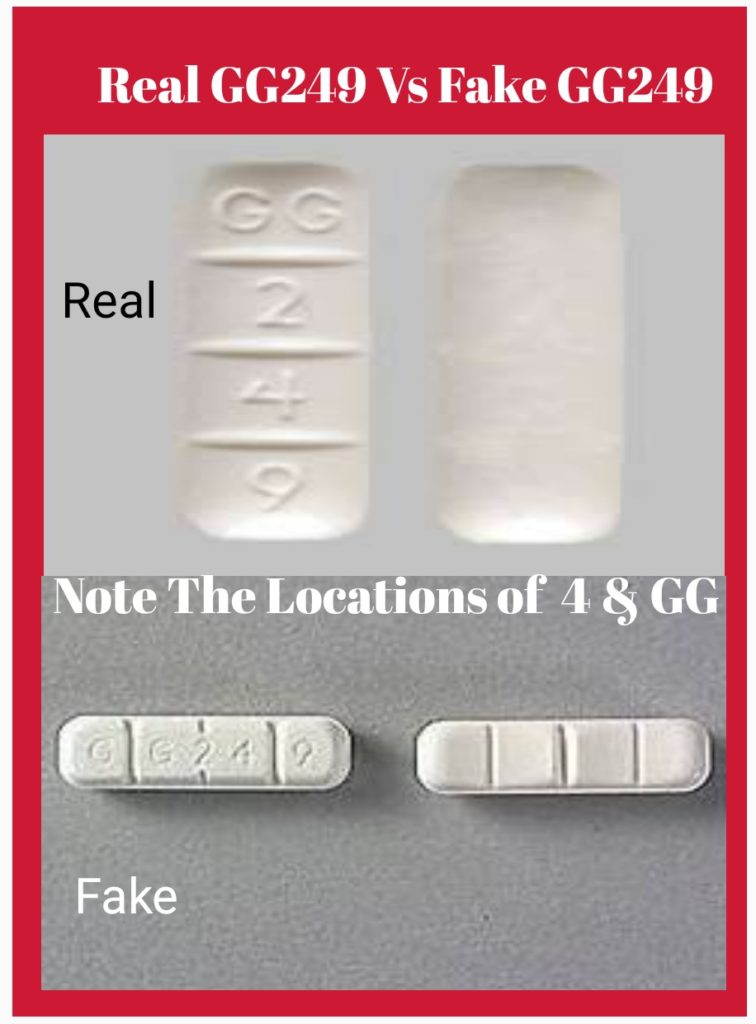 How to spot a fake GG249 Xanax Bar

Fake drug manufacturers are acquiring new technologies, making it easier to make fake pills look very much like the real thing. Sometimes it is difficult to tell a fake GG249 xanax bar from an original. With pictures of fake GG249 bars all over the cyber space masquerading as real, here is how to detect a fake GG249:

Visual inspection as stated by World Health Organization (WHO) (1999) still remains the first step in identifying potential fake drug irrespective of the analytical methods used. Look at the fonts in the imprints on the pills and the pack for inconsistencies. Number 4 is written on the Xanax white bars as a part of the number 249 in GG249. This number 4 is written differently on the fake GG249 white bars and the real ones.

A GG249 pill fake will most times taste differently and have excessive powder and/or pieces of tablets at the bottom of the container (from abraded, crushed or broken bars). There are three scores or horizontal lines on these gg249 white bars.

What are the withdrawal symptoms of gg249 pill?

Withdrawal syndrome refers to a set of symptoms occurring in discontinuation or dosage reduction of some types of medications and recreational drugs. Withdrawal symproms of gg249 pill is more likely to occur at higher doses given over a long period of time. Consequently, patients on this medication for extended periods of time should slowly taper the medication under a doctor’s supervision rather than abruptly stopping the medication. It should be noted that symptoms such as seizures can occur in more severe cases of withdrawal. The abrupt discontinuation of gg249 bars after prolonged use can lead to withdrawal symptoms such as:

Side Effects of GG249 Pill

Using GG 249 can bring about a variety of side effects. Most side effects may be life-threatening especially when counterfeit products are used.  Side effects can also occur while using the real GG249 pill, especially at the beginning of therapy, and will usually disappear when a person stops taking the medication.

Some possible side effects of GG249 pill include:

A person needs emergency medical help if they have any of these symptoms of an allergic reaction to Xanax:

A person should call their doctor at once if they have serious side effects such as:

Alprazolam-containing medications like GG249 Pills are the number one prescribed psychiatric medication in the United States. 70% of teens with a Xanax addiction get the drug from their family’s medicine cabinet.

Tolerance to GG249 Pills develops quickly, requiring the user to take more of the drug to achieve the desired effects. Someone with a GG249 Pills addiction may take up to 20 or 30 pills per day. If the user decides to stop taking GG249 Pills, they may experience withdrawal effects such as anxiety, restlessness, insomnia, and tremors. The onset of withdrawal symptoms is a sign that a physical dependence has developed. The development of tolerance and withdrawal are indications of addiction.

Once a GG249 Pills addiction has taken hold, daily responsibilities such as school, work, or family are ignored as energy is redirected toward drug-seeking behavior.