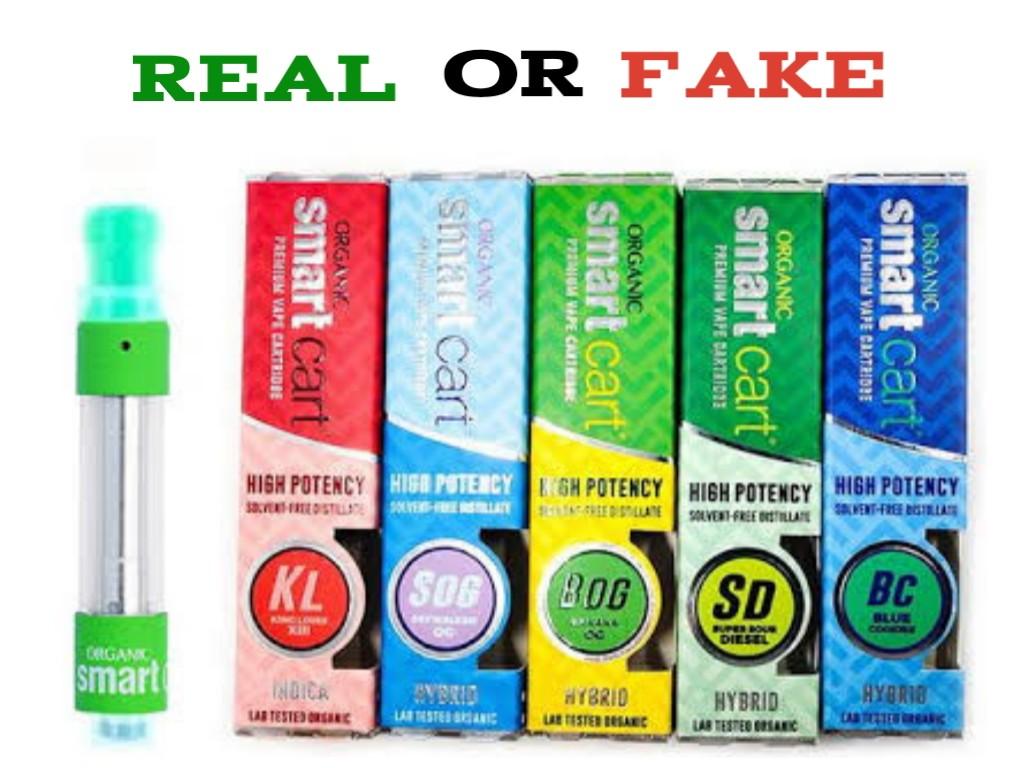 This THC cartridge exists to profiting off people looking for a high-quality product for a low price. We are now living in a time where people can buy empty THC cartridge packaging of famous brands and fill them up with their THC oil. All Smart Carts are unlicensed, black market products that are not tested for safety. So, to spot a “fake,” just spot a Smart Cart.  Unfortunately, like a lot of vape brands, underground producers are making fake, knock-off versions of this unlicensed cart, which aren’t lab tested for quality or safety assurance like the main product.

Fake THC carts are sending people to the hospital. An 18-year-old male patient showed up to NYU Winthrop Hospital in Long Island complaining of chest pain, nausea, fever, and shortness of breath. Initially, doctors thought he had pneumonia, due to his X-rays showing “haziness” in the lungs. Within 48 hours, says Melodi Pirzada, chief of pediatric pulmonology at the hospital, the patient’s condition worsened and he was sent to the ICU. There he was diagnosed with ARDS, a condition associated with acute lung injury. He was connected to a breathing tube and placed in a medically induced coma for one week.

The doctors were baffled as to how a healthy 18-year-old could become so sick, until the patient’s mother showed up at the hospital with something she’d dug up from her son’s wastebasket. It was a vaporizer cartridge with the label TKO Extracts, a licensed company based in California that sells THC products; the cartridge was later confirmed to be a counterfeit version of the company’s product.

Vitamin E acetate is a lipid (oil) commonly found in cosmetics, but is used as a cutting agent in cartridges for its color and viscosity, according to the CDC. Although the chemical is considered safe in makeup, the combustion and inhalation of it coats pulmonary tissue and saturates macrophages (immune cells). These engorged white blood cells, although normally integral to the body’s natural immune response system, start to attack lung tissue, inducing respiratory illness.

However, before we look at how to identify a real cartridge, it is important that we take a holistic look at the health effects of THC. Marijuana can be used in some states for medical reasons, and in some areas, recreational use is legal as well. No matter how you use marijuana, the drug can cause immediate and long-term effects, such as changes in perception and increased heart rate. Over time, smoking marijuana may cause chronic cough and other health issues. The effects of marijuana on the body are often immediate. Longer-term effects may depend on how you take it, how much you use, and how often you use it. The exact effects are hard to determine because marijuana has been illegal in the U.S., making studies difficult and expensive to conduct.

Much like tobacco smoke, marijuana smoke is made up of a variety of toxic chemicals, including ammonia and hydrogen cyanide, which can irritate your bronchial passages and lungs. If you’re a regular smoker, you’re more likely to wheeze, cough, and produce phlegm. You’re also at an increased risk of bronchitis and lung infections. Marijuana may aggravate existing respiratory illnesses, such as asthma and cystic fibrosis. Marijuana smoke contains carcinogens, so it may increase your risk of lung cancer too. However, studies on the subject have had mixed results. According to the National Institute of Drug Abuse (NIDA), there is no conclusive evidence that marijuana smoke causes lung cancer. More research is needed. READ: CBD Syrup: Benefits, High, Side Effects, Legality

THC moves from your lungs into your bloodstream and throughout your body. Within minutes, your heart rate may increase by 20 to 50 beats per minute. That rapid heartbeat can continue for up to three hours. If you have heart disease, this could raise your risk of heart attack. One of the telltale signs of recent marijuana use is bloodshot eyes. The eyes look red because marijuana causes blood vessels in the eyes to expand.

How to Spot Fake Smart Cartridges

From cannabis industry professionals, to testing lab experts, to consumer affairs and public health agencies, everyone reiterating the point that products from the legal market is likely to be safer given factors like increased accountability and the rigorous testing required by state law.

While there are no foolproof methods (even well-regulated markets sometimes have recalls), there are many ways to reduce the risk of consuming a contaminated fake product. You can further reduce harm by

This information is provided by Public health Nigeria for informational and Harm Reduction purposes we do not promote smoking or other activities that are harmful to health. Harm reduction (THR) is a public health strategy to lower the health risks to individuals and wider society associated with using tobacco products. It is an example of the concept of harm reduction, a strategy for dealing with the use of drugs. Tobacco smoking is widely acknowledged as a leading cause of illness and death, and reducing smoking is vital to public health. SEE: How to Spot Fake Raw Garden Carts Vs Real