Dukoral is a vaccine indicated for active immunization against disease caused by Vibrio cholerae serogroup O1 in adults and children from 2 years of age who will be visiting endemic/epidemic areas. It is available as a suspension in a bottle together with effervescent granules in a sachet. The granules are dissolved in water and mixed with the vaccine before intake. The vaccine contains four different inactivated strains (types) of the bacterium Vibrio cholerae (V. cholerae) serotype O1, and part of a toxin from one of these strains as active substances.

Dukoral is used to protect against cholera (a very serious disease caused by V. cholerae, which is caught from contaminated food or water and causes severe diarrhoea). Dukoral is used in adults, adolescents and children from two years of age who will be visiting high-risk areas. Dukoral should be given according to official recommendations, taking into account where cholera is found and the risk of contracting the disease. Dukoral should not replace standard protective measures against cholera, including advice on diet and hygiene.The vaccine can only be obtained with a prescription.

How is Dukoral used?

In adults and children from six years of age, Dukoral is given as two doses, one to six weeks apart. Children aged between two and six years should receive three doses, with an interval of one to six weeks between each dose. The course should be completed at least one week before potential exposure to cholera. For continuous protection against cholera, a single booster dose is recommended within two years for people from six years of age, and within six months for children aged between two and six years. The course should be repeated in adults who have not been given a booster within two years and in children not given a booster within six months.

The vaccine is made up by dissolving the granules in a glass of water to prepare an effervescent (sparkling) solution, and adding the contents of the bottle. Once prepared, the suspension should be drunk within two hours. Food, drink and other medicines taken by mouth should be avoided for one hour before and one hour after each dose of Dukoral.

How does Dukoral work?

Dukoral is a vaccine. Vaccines work by ‘teaching’ the immune system (the body’s natural defences) how to protect itself against a disease. Dukoral contains small amounts of inactivated (killed) cholera bacteria and a part of the cholera toxin called the ‘B subunit’. This subunit is not toxic by itself. When a person is given the vaccine, the immune system recognises the bacteria and the toxin, and makes antibodies against them. In the future, the immune system will be able to produce antibodies more quickly when it is exposed to cholera bacteria. These antibodies will help to protect against cholera by preventing the bacteria and the toxins from attaching to the walls of the gut and entering the body’s cells.

How to Spot fake Dukoral
The  World Health Organization (WHO) issued a Medical Product Alert about fake oral cholera vaccine (Dukoral) circulating in Bangladesh. The genuine manufacturer informs that the combination of the manufacturers Valneva Canada Inc address and Crucell logo should not exist on any packaging in any market. Hence, fake versions of fake Dukoral can be detected easily by simple visual inspection. For this, see also picture below. Investigations are ongoing. 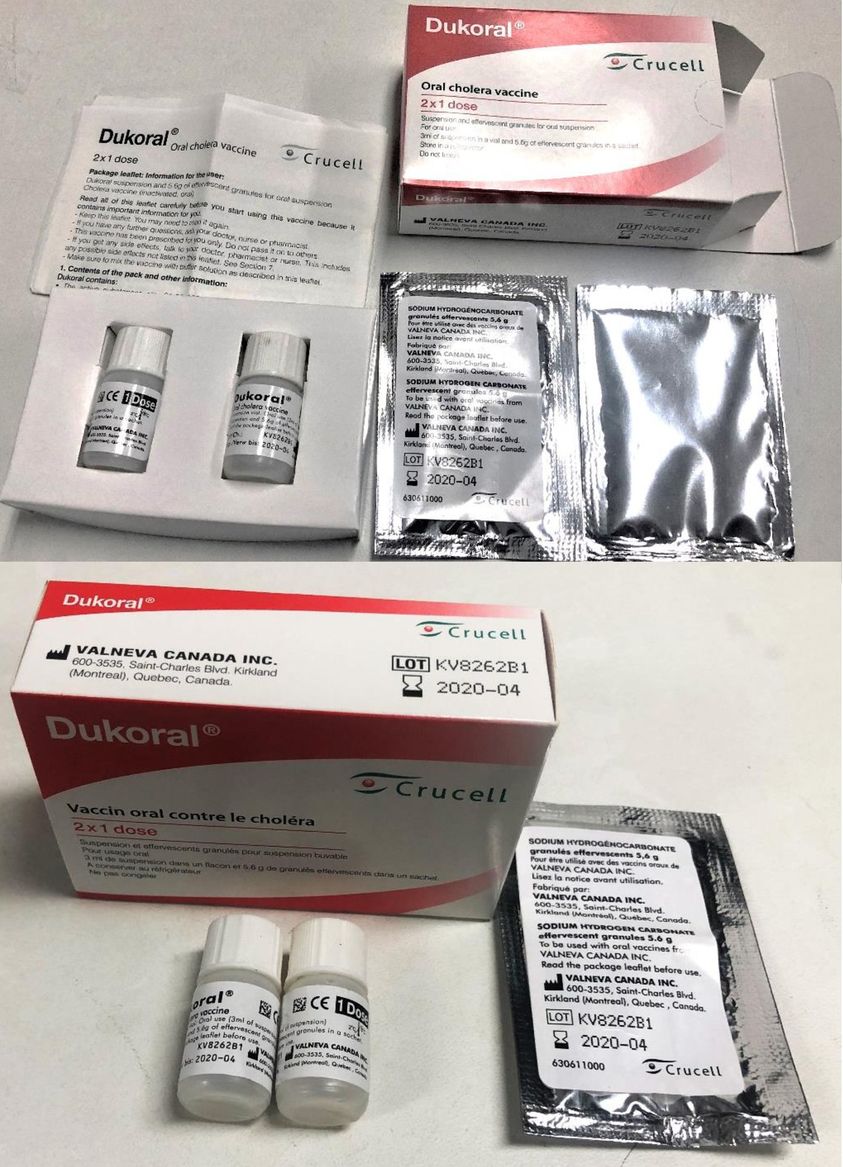 READ The 4 Main Importance of Sanitation

How to Spot Fake Rabies Vaccine

How to Spot Fake Hepatitis B Vaccine