Anti–snake venom (ASV) are immunoglobulins prepared by immunizing horses with the venom of poisonous snakes and subsequently extracting and purifying the horses’ serum. They are the only effective antidote for snake venom. Antivenoms may be species specific (monovalent/monospecific) or may be effective against several species (polyvalent/polyspecific). Antibodies raised against the venom of one species may have cross-neutralizing activity against other venoms, usually that from closely related species. This is known as paraspecific activity. As per the recommendations of WHO, the most effective treatment for snakebite is the administration of monospecific ASV; however, this therapy is not always available to snakebite victims because of its high cost, frequent lack of availability, and the difficulty in correctly identifying the snake.

WHO recommends that if an adequate cold chain is in place, antivenoms should be prepared in the liquid form, since this reduces production costs and avoids the potential adverse physicochemical alterations to the product sometimes brought about by lyophilization. On the other hand, if the integrity of the cold chain cannot be guaranteed, antivenoms should be lyophilized to maintain stability.

About 5.4 million snake bites occur each year, resulting in 1.8 to 2.7 million cases of poisoning. There are between 81 410 and 137 880 deaths and around three times as many amputations and other permanent disabilities each year. While highly effective treatments exist, antivenoms are not widely available in the regions where they are needed.

Several antivenom preparations are available internationally. However, there have been a spike in the circulation of fake anti–snake venom by unscrupulous agents and criminal gangs. This malevolent conduct has led to catastrophic loss of lives of the many who would have been saved had a genuine Anti–snake venom  been administered. In Nigeria, the officer in charge at the Snakebite Treatment and Research Centre in Kaltungo, Gombe state, raised alarm over the circulation of fake anti-snake venom known as ASNA polyvalent. He said the unwholesome drugs, which were not suitable for the handling of bites inflicted on humans by African snakes. The product is produced by some pharmaceutical companies in India and brought to the country. In Kenya, two falsified brands of antitoxin against puff adder are circulating . The Pharmacy and Poisons Board (PPB) issued an appropriate warning after the genuine manufacturer Sanog Aventus (Italy) confirmed that they do not assemble the samples shown below. The label claims “000697” as manufacturing code, “09-2015” as date of manufacturing and “09-2022” as expiry date. The second fake drug is labelled “AntVenom” only. It does not bear the date of manufacture, dosage or instructions of use. The puff adder is a dangerous snake responsible for the highest rate of snakebite deaths in Kenya. If not treated, the bite is fatal. It destroys the tissue area around the bite leading to the amputation of the affected limb if not properly treated with genuine and effective ant venom. Some 60 doses of puff udder were intercepted in Kajiado on Tuesday by PPB officials and police officers. One person was arrested. Picture: Sample of spurious anti-snake venom recently found in Kenya. 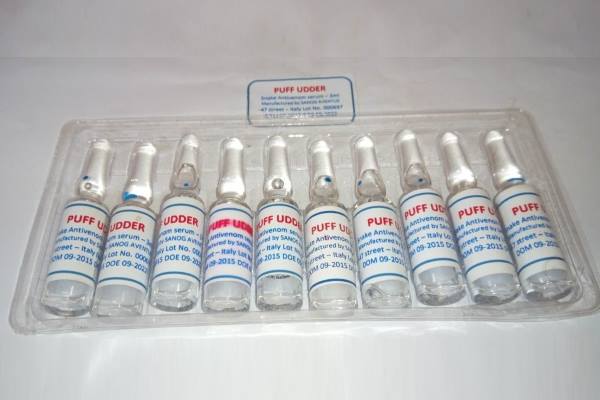 After a comprehensive risk assessment, WHO has issued its first positive recommendation for the use of EchiTAbGTM, an Antivenom to treat snakebites of medical relevance in the northern part of Sub-Saharan Africa, namely the west and east African carpet viper. These snakes are present in about 20 countries in the northern part of Sub-Saharan Africa* and are known to cause the most cases of snakebite deaths in the world.

How to Spot Fake Snake Venom

Check for differences in the physical appearance (colour uniformity, size, shape, consistency etc.) of the drug. As stated by WHO, commonly encountered physical defects that should be looked out for in tablets include:

Mobile Authentication Service (MAS) is one of the cutting edge technologies used to curb the menace of fake drugs. It is a technology that has put the power of identifying fake drug products in the hands of many cell phone users.

MAS involves the packaging of drugs with scratch card placed on the package from the point of manufacture. When scratched, the revealed codes could be sent free of charge to 38353 (Sproxil), 38351 (Pharmasecure), 20966 (UBQ), 1393 (Goldkeys) etc., depending on the service the manufacturer chose. Shortly after, the sender receives a reply confirming whether the drug is genuine or fake.

This is another way of identifying fake product. If the price is far cheaper than what is expected, then you have to think twice. However, this may not always be true especially for some products (fake innovator/generic brands) which may be sold at the same price as the genuine one.

Counterfeit drugs most of the time contains inert substances other than the appropriate Active Pharmaceutical Ingredient (API). They may also contain incorrect substances, improper dosage or hazardous substances which do no elicit therapeutic effect. Unusual side effects, allergic reactions, or a worsening of medical condition after taking an  anti–snake venom may be a pointer to identifying a fake.