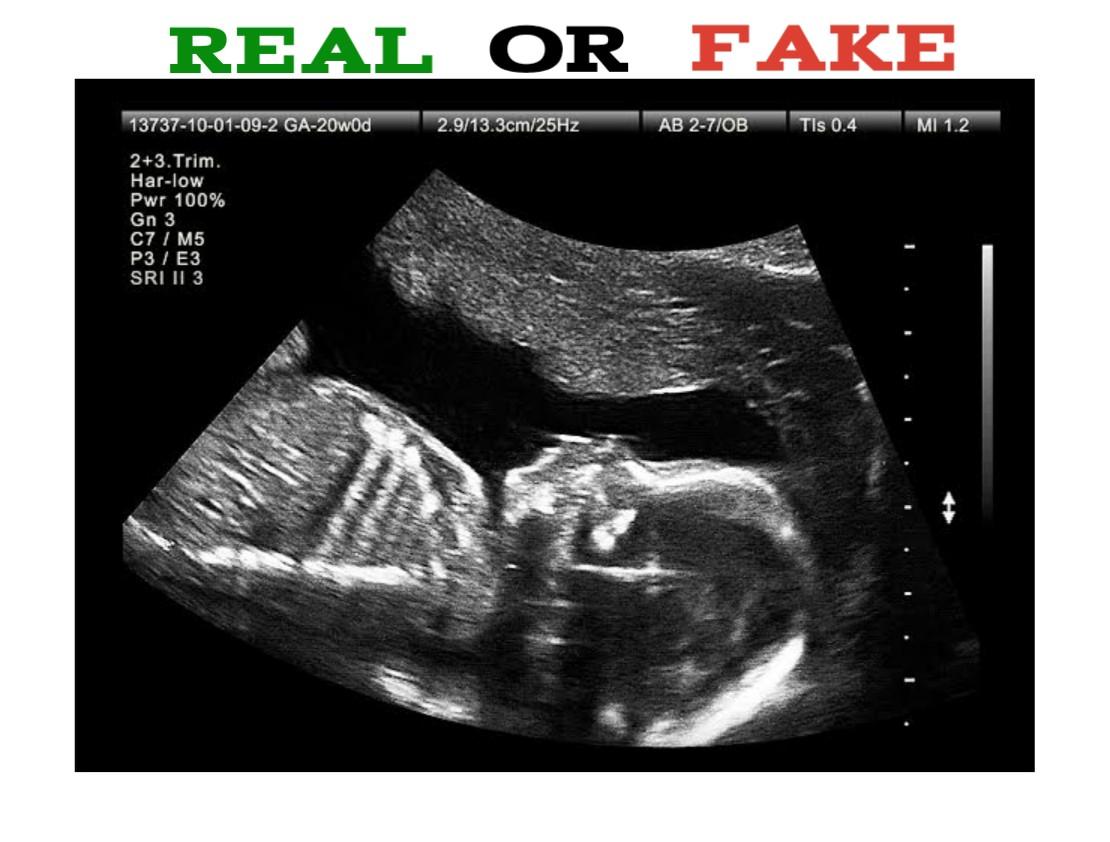 What is an ultrasound?

An ultrasound is an imaging test that uses sound waves to create a picture (also known as a sonogram) of organs, tissues, and other structures inside the body. Unlike x-rays, ultrasounds don’t use any radiation. An ultrasound can also show parts of the body in motion, such as a heart beating or blood flowing through blood vessels.

There are two main categories of ultrasounds: pregnancy ultrasound and diagnostic ultrasound.

A pregnancy ultrasound is used to look at an unborn baby. The test can provide information about a baby’s growth, development, and overall health.

Diagnostic ultrasound is used to view and provide information about other internal parts of the body. These include the heart, blood vessels, liver, bladder, kidneys, and female reproductive organs.

Fake ultrasounds were originally developed for pranks, however, it is increasingly been used for fertility, paternity, and other health and insurance related frauds. Fake pregnancy ultrasounds are the most common.  According to multiple reports, positive pregnancy tests are available for purchase on Craigslist. Recently, Courtney and Irvin Murrell were sentenced to jail time for pretending that Courtney miscarried twins.

The Murrells bilked various friends, acquaintances, and employers out of money for funeral expenses and other miscellaneous costs associated with the fabricated pregnancy and miscarriage. One of the victims was the mother of one of Courtney’s former boyfriends, whom she named as the father of the nonexistent children.

If you have recently been in receipt of a questionable ultrasound picture, there are simple ways to spot a fake. According to baby may be shop, a company that deals with fake ultrasounds for pranks, here’s how you can tell if an ultrasound photo is  real or fake:

The fetus in the ultrasound image does not look human to you; in fact, you were thinking twice if it is sporting a body part that you don’t know the name of. For one reason or another, it just looks off. Maybe it’s a little blurry in the wrong areas. Maybe it has alien features. If this is the case, then you should really talk things through with the person. Another thing to notice is their facial expression because it will be pretty challenging to put on a straight face if someone plans to pull a prank on you. So just try to be as keen as possible.

To know if the image is real or not, you may use Google to find out. Just take a clear picture of the ultrasound; it is much better if you scan it to see the full details of the image—that’s if you really want to go the extra mile. Second, type images.google.com and do a [search by image] by dragging the picture on the search bar. You can easily tell if it is fake if the same image appears via Google search.

If you still don’t know, Baby Maybe is a website and an online shop that produces fake ultrasounds for customers, and most of them are using them for practical jokes. By browsing through the product catalog, you will be able to check if there are actual pictures that are really similar to the image that you are searching for.

This is an obvious one, but even the most aware person may be fooled if they don’t know how to check the details carefully. Use your old friend, the search engine, and try entering the ultrasound details. Checking the hospital’s name and its location may tell if someone is telling the truth.

Additionally, you can also try to match up the date when the ultrasound was taken against the age of the fetus and see if there are any discrepancies. If you found out that they are playing a practical joke on you, at least you can just pretend not to know anything for a while.

Hospital staff, even the encoders, are trained to be responsible and cautious. They all know that a single mistake can take a toll on the patient, so it is incredibly rare for a hospital to issue a document with spelling errors in regard to the name, the hospital, the date, or any other medical terms. If this is the case, then you can investigate further!

As you look closer, it may seem to you that the ultrasound is not printed in high quality and the paper used resembles regular old printer paper. You have to take note that medical ultrasound images are printed on thermal paper. Thermal paper uses heat to imprint the image on the paper, as opposed to laying ink down like an inkjet or photo printer. These pieces of thermal paper have a plasticky smooth and quite shiny texture, like an extra high quality receipt from a store.

Also, the print should not fade easily when scratched. On the other hand, if you are planning to prank someone, be it a family member or a friend, Baby Maybe can print high-quality images on real thermal paper so you can laugh all night while they try to find out if the news is indeed real or not.

Another thing to note is that some people find it hard to explain themselves unless they did their extensive research. However, if the person can’t explain what happened during the session with the doctor, then it’s likely that the ultrasound image is fake. If they are having a hard time telling what happened or kept saying that they forgot most of the details, then it is clearly a dead giveaway that they are faking it.

Okay, so you checked every detail from the ultrasound and you are quite convinced. However, when you asked the doctor’s name, they just answered the last name or maybe even refused to answer you. If all else fails and they still insist on not saying anything about it nor allowing you to come with them to the next ultrasound session, then you probably should think twice.

Okay. So we always have that friend who is into all kinds of fun and games. If the personality of that person is most likely inclined to the crazy or amusing side of things, you may want to maintain a little healthy skepticism. Especially if having a baby is sort of a big deal among your circle of friends, this could be just a silly game.

Well, sooner or later, the truth will surface. You may just believe half-heartedly until you eventually find out the legitimacy of the news. Your friend, family member, or partner might even end up spilling the beans all too soon. If you have suspicions, you may also just act cool and unimpressed to somehow knock the prank. Or just enjoy the whole news and story, whether it ends up true or not. READ: What Does EDD AUA Mean On An Ultrasound

How To Spot Fake Tyres