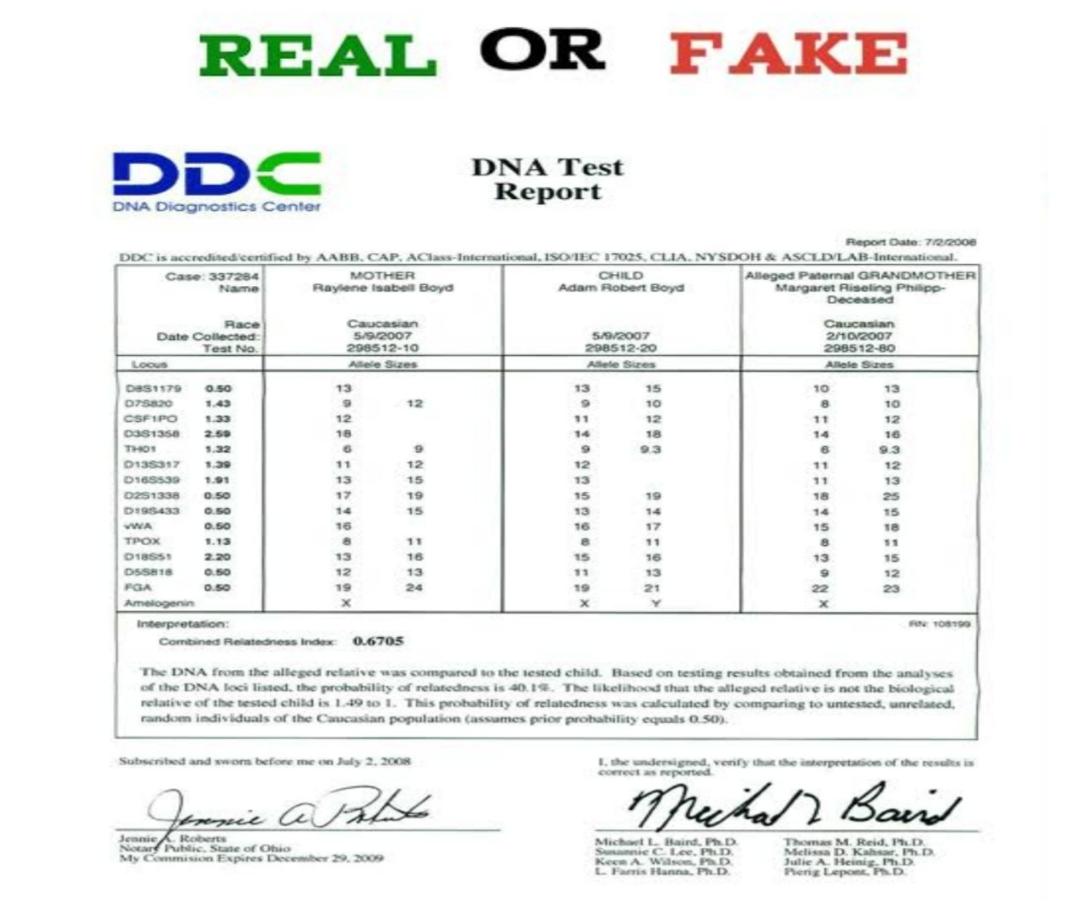 Paternity fraud occurs when a mother deliberately misidentifies her partner as the biological father of her child. Studies indicate that Nigeria ranks second highest in the world with around 30% of cases of paternity fraud in the population. Research published in 2016 indicated that one in 50 British fathers is unknowingly raising a child who is the biological child of another man, and that misattributed paternity is rarer than commonly believed.

A 2005 scientific review of international published studies of paternal discrepancy found a range in incidence, around the world, from 0.8% to 30%.

What is a DNA paternity test?

Deoxyribonucleic acid, or DNA, is the genetic material you inherit from your mother and father. Paternity refers to fatherhood. A DNA paternity test uses DNA, usually taken from a cheek swab, to determine whether a man is the child’s biological father.

How accurate is a DNA paternity test?

DNA paternity tests are extremely accurate. A test can show with 99.9% accuracy if a man isn’t a person’s biological father.

Establishing paternity can be important for several reasons. It can help gain legal rights to child support, child custody, Social Security benefits and inheritance. It can also identify links to genetic conditions that can affect your long-term health.

What are the types of DNA paternity tests?

If you’re trying to prove or disprove paternity for legal reasons, the test must take place in a medical setting (a legal DNA paternity test). Otherwise, you can use an at-home DNA paternity test kit bought online or at a drugstore.

How is a DNA paternity test performed?

There are two equally accurate ways to test for paternity:

Blood tests: The potential father and child give blood samples at a medical office. The facility sends the samples to a lab for analysis.

Cheek swabs: The potential father and child swab the inside of their cheeks for buccal (cheek) cells. You mail the cotton swab applicators to a designated lab. If swabbing takes place in a medical setting, the office sends the samples to a lab.

What age should a child be to perform a DNA paternity test?

A newborn baby can already be tested. The samples for paternity test are taken with a simple buccal swap. This is not traumatic for a baby. You only need to take care not to use the swab directly after the baby has been fed.

How is paternity confirmed?

The lab runs a series of tests called DNA sequencing. These tests look for genetic matches between the potential father and child. A match confirms paternity.

In a DNA paternity test as well as in a DNA relationship test, scientist compare the genetic profile of the participants to determine whether or not the participants are related. This is done by a comparison of the DNA markers. For a paternity test, the laboratory will test at least 21 DNA markers to determine the paternity. If there is a chance that the two alleged fathers are related, there is need to let the lab know beforehand. Additional analyses need to be performed and it will determine the way the test results are interpreted.

For a relationship test, medical scientists will use a more comprehensive test as the participants are often only distant relative, if related at all. So they will test 26 – 45 marker, if needed even more than that, to answer the question of relationship between the participants.

If after the testing, they cannot exclude the paternity for an alleged father, they will proceed with a bio statistical probability calculation. This way medical scientists prove a paternity probability of >99.9% in a deficiency case. Such a result is called “paternity practically proven”.

If the mother will take part in the DNA test the statistical result of probability can be increased to 99.999%.

If there are genetic markers in the child’s DNA profile which cannot be found in the alleged father’s profile, this person is excluded from being the biological father of this child.

For a paternity test with two or three participants, they generally test 21 to 31 DNA markers. The child inherits half it’s DNA from the mother and the other half from the father. If the mother and the alleged father are the approved parents of the child the DNA must have been inherited from those parents. A paternity test now analyses the DNA sequences. When, during the test, they find differences in 3 or more DNA markers the alleged father’s paternity is excluded.

An exclusion will always be 100% secure. There is no “maybe”. Should we come to this conclusion after our first analyses medical scientists repeat the whole test for free with the second sample you have submitted.

How To Spot a Fake DNA Test Results

Fraudsters and unscrupulous individuals sell fake DNA tests and individuals with the intent of concealing the real identity of a child or person patronize these group and present a fake DNA result as the real thing.

Many people fall victim to these scams each year. Here are some few tips to help you identify a Fake DNA test results:

Confirm the source: Every DNA test result comes with the details of the hospital or laboratory where the test was conducted. You can quietly call the phone numbers or send an email for the hospital to confirm the authenticity of the results you have.

Accreditation, certification and Licensing: Each country has its own licensing regime for DNA testing labs. AABB accreditation is the most widely recognized certification for DNA paternity testing laboratories and is considered the gold standard in the industry. AABB (formerly called the American Association of Blood Banks) establishes rigorous standards of quality with respect to sample collection, laboratory analysis, experience, competence, confidentiality and safety, and ensures that accredited facilities comply with these standards through regular on-site inspections.

AABB is approved by the U.S. Secretary of Health and Human Services as an organization whose accreditation qualifies a laboratory (in most states) to perform chain-of-custody paternity testing for family court cases (involving child support, custody, etc.).

The absence of valid licensing, certification or accreditation implies that you may be dealing with a fake DNA test results.