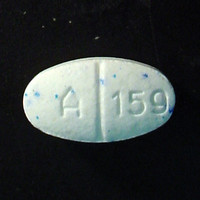 The white & blue specks, elliptical / oval pill with imprint A 159  has been identified as Phentermine Hydrochloride 37.5 mg supplied by Qualitest Pharmaceuticals Inc. Phentermine belongs to the drug classes anorexiants, CNS stimulants. The drug works by stimulating the central nervous system (nerves and brain), which increases your heart rate and blood pressure and decreases your appetite. Phentermine is used together with diet and exercise to treat obesity, especially in people with risk factors such as high blood pressure, high cholesterol, or diabetes.

Fake pharmaceuticals are a frighteningly big industry. Up to 10% of medicines sold worldwide are counterfeit, with significantly higher percentages of fake or substandard pharmaceuticals being sold in low- and middle-income countries. Phentermine is one of the most commonly counterfeited medications.

In the United States, most people come across fake or counterfeit medications when they purchase online from unverified vendors or outside of regular channels. Unfortunately, intentionally misleading advertising and carefully-crafted websites only make the problem worse because they lead consumers to believe that they‘re purchasing a legitimate pharmaceutical product. For this reason, it’s important to know how to properly identify phentermine and avoid fake A 159 pill.

The Appeal of Buying fake A 159 pill Online

Phentermine is one of the popular prescription appetite suppressant in the world and it used to be sold online. However, in the late 1990s it became illegal to buy or sell controlled substances (like phentermine) online and this practice was brought to an abrupt halt.

Unsurprisingly, however, in our evermore digital world many people still look for some way to buy A 159 pill online. Despite the initial appeal of instant gratification and saving on doctor’s fees, buying this prescription-only medication online is unwise because:

Dangers of Fake A 159 Pills

It’s dangerous: Fake A 159 pills are dangerous. Real A 159 pill is regulated, studied and medically-supervised and it still has its risks. If you are sold fake A 159 pill online, it may consist of anything from an ineffective supplement to a hazardous counterfeit medication. Alarmingly, the World Health Organization estimates that at least one million people die each year from taking counterfeit medications .

Fake pharmaceuticals are dangerous because they often consist of:

No matter your budget or desperation to lose weight, do not take fake phentermine.

How to Identify Fake A 159 Pills

If you see a website or advertisement that promotes, “phentermine: no prescription necessary” chances are that it’s not real phentermine. The site is probably selling a counterfeit medication or an unregulated dietary supplement.

However, if you are unsure, watch-out for these three major warning signs:

Similar Names: One of the most common tricks that companies use to sell fake phentermine is to create a product whose name is something very similar to phentermine, or a well-known brand of the popular weight loss pills. A few examples are:

None of these products contain real phentermine. They are not an equitable alternative for what you would receive from an actual doctor. Double-check the name and ingredients of the product before purchasing. If the active ingredient is not phentermine, it is NOT real phentermine.

Pill & Packaging Imitations: Another common trick is to sell pills that look like real phentermine. Many supplement companies sell white tablets with blue specks (or blue and white capsules) to trick customers into thinking their product is real A 159 pill. You can tell the difference between real and fake A 159 pill by taking the time to check manufacturer and imprint codes.

Also, remember that phentermine is only available with a doctor’s prescription. Real phentermine is a schedule IV controlled substance and the laws regulating its sale are in-place to protect you. If a product is sold online as “over the counter phentermine” either it’s not real phentermine, or it’s being sold illegally. Either way, you don’t want those pills.

Misleading Advertising: Misleading advertising is a widespread problem, especially in the weight loss industry. Supplement and diet companies often use intentionally misleading advertising to deceive potential customers into thinking that the product will do more than it actually will. Other companies lie and claim that you can buy real A 159 pill online (through their site), but what they’re actually selling is a supplement or counterfeit medication.

Still other companies try to attract customers by offering seemingly impossible convenience or affordable price point, plus the promise of guaranteed weight loss. As the old adage goes, “If it’s too good to be true, it probably is.”

The fake phentermine online give you an idea how hard it is to spot the differences between real and fake phentermine. This underscores the importance of buying phentermine pills from a trustworthy place, such as your local pharmacy. The counterfeit pill are a white oval-shaped bisected tablet with blue speckles with an “A” and “159” embossed on the tablet. The counterfeit tablets contain fenfluramine, which was withdrawn from the U.S. market in 1997 because it can cause heart damage, known as valvular heart disease.

Use Phentermine exactly as directed on the label, or as prescribed by your doctor. Do not use in larger or smaller amounts or for longer than recommended.

Follow all directions on your prescription label and read all medication guides or instruction sheets. Your doctor may occasionally change your dose. Use the medicine exactly as directed.

Phentermine is usually taken before breakfast, or 1 to 2 hours after breakfast. Follow your doctor’s dosing instructions very carefully.

Never use phentermine in larger amounts, or for longer than prescribed. Taking more of this medication will not make it more effective and can cause serious, life-threatening side effects.

Phentermine is for short-term use only. The effects of appetite suppression may wear off after a few weeks.

Phentermine may be habit-forming. Misuse can cause addiction, overdose, or death. Selling or giving away this medicine is against the law.

Call your doctor at once if you think this medicine is not working as well, or if you have not lost at least 4 pounds within 4 weeks.

Do not stop using phentermine suddenly, or you could have unpleasant withdrawal symptoms. Ask your doctor how to safely stop using this medicine.

Store at room temperature away from moisture and heat. Keep the bottle tightly closed when not in use.

Is PhentARmine the Same as Phentermine?

Phentarmine is sold in both pill and capsule form. The pills are white with blue specks, and the capsules are half white and half blue. Despite the similar appearance, phentarmine is NOT phentermine. How to Spot a Fake 2090 V Xanax