How To Safely Use Antipsychotic Medications

Antipsychotics, also known as neuroleptics, belong to a class of medication primarily used to manage psychosis (including delusions, hallucinations, paranoia or disordered thought), principally in schizophrenia but also in a range of other psychotic disorders. They are also the mainstay together with mood stabilizers in the treatment of bipolar disorder.

Recent research has shown that use of any antipsychotic results in smaller brain tissue volumes and that this brain shrinkage is dose dependent and time dependent. A review of the research has also reinforced this effect. The use of antipsychotics may result in many unwanted side effects such as involuntary movement disorders, gynecomastia, impotence, weight gain and metabolic syndrome. Long-term use can produce adverse effects such as tardive dyskinesia.

First-generation antipsychotics, known as typical antipsychotics, were first introduced in the 1950s, and others were developed until the early 1970s. Second-generation drugs, known as atypical antipsychotics, were introduced firstly with clozapine in the early 1970s followed by others. Both generations of medication block receptors in the brain for dopamine, but atypicals tend to act on serotonin receptors as well. Neuroleptic, originating from Greek: νεῦρον (neuron) and λαμβάνω (take hold of)—thus meaning “which takes the nerve”—refers to both common neurological effects and side effects. SEE: Antipsychotic Medications List 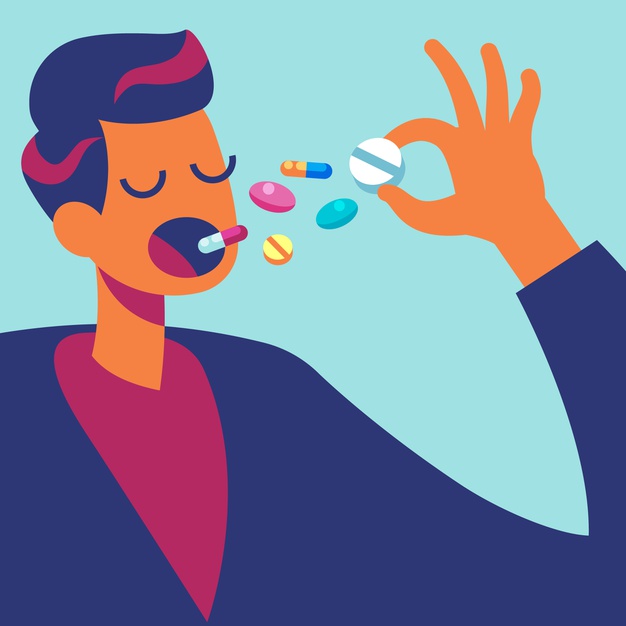 How long should I take antipsychotics?

Medication safety is important when you use this drugs. If you take antipsychotics for psychosis, how long you take them depends on what the psychosis is related to and how many episodes you have experienced. In some situations, you may only need to take this medication until the symptoms of psychosis are relieved. In others, antipsychotics may be used over a longer term to help prevent further episodes. When starting a new antipsychotic as a long-term treatment, you should take that drug for at least a month before deciding whether or not it is working for you.

Drugs that are addictive produce a feeling of euphoria, a strong desire to continue using the drug, and a need to increase the amount used to achieve the same effect. Antipsychotics do not have these effects. Antipsychotics do, however, have one thing in common with some addictive drugs—they can cause withdrawal effects when you stop taking them, especially if you stop suddenly. These effects can include nausea, vomiting, diarrhea and stomach pain, dizziness and shakiness. When the time comes to cut down or stop taking the drug, cutting back gradually helps to reduce withdrawal effects.

How do I cut down or stop taking antipsychotics?

Whether you want to cut down your dose or stop taking a medication, the same rule applies: go slowly. A sudden change in your dose greatly increases the risk that psychotic symptoms will return or become more intense.

The first step is to ask yourself if this is the right time. Are you feeling well? Is the level of stress in your life manageable? Do you feel supported by your family and friends? If you think you’re ready, talk to your doctor. If your doctor doesn’t agree, find out why. If you are not satisfied with his or her reasons, you may want to see another doctor for a second opinion.

If your doctor does agree, he or she will advise you not to skip doses but to reduce your dose gradually—usually by about 10 per cent at a time—with at least two to three weeks between each reduction. This process of cutting back will take several months. Using a pill cutter or a liquid form of your medication can help you to cut your dose down in small amounts. If you want to stop taking more than one medication, your doctor will usually suggest that you lower the dose of one drug at a time.

If you start to feel unwell as you cut down, let your doctor know. He or she can help you determine whether you are experiencing withdrawal effects or signs that symptoms are returning. You may want to go back up with your dose. Find the dose that works best for you.

Will antipsychotics interact with other medications?

Antipsychotics may interact with other medications prescribed by your doctor or dentist or purchased at a drug store, and with herbal remedies or street drugs. Make sure you tell your doctor about all drugs you are taking. Always ask your doctor or pharmacist about potential interactions before taking any medications or herbal remedies, including cold or allergy tablets or cough syrups. Antacids can interfere with absorption of antipsychotics and decrease their effect. If you are taking antacids, you can avoid this by taking them at least two hours before or one hour after taking your medication.

What if I smoke cigarettes or drink coffee or alcohol while taking antipsychotics?

Smoking cigarettes can increase how quickly some antipsychotics are broken down by the body, meaning that people who smoke heavily may need more medication than those who do not. Drinking coffee has the opposite effect, slowing down the breakdown of antipsychotics. If you change how many cigarettes you smoke or how much coffee you drink, let your doctor know as he or she may need to adjust your dose. Antipsychotic drugs may increase the effects of alcohol, making you more sleepy, dizzy and lightheaded. Having one or two drinks on occasion should be okay—but remember that one drink may have the effect of two or even three drinks.

Smoking and problems with alcohol are more common among people with schizophrenia than they are in the general population. The reason for this is unclear; what is clear is that smoking reduces life expectancy, and alcohol can make it even more challenging to manage the symptoms of schizophrenia. Being open and honest about your smoking and drinking lets your doctor know how you are doing and helps him or her to determine whether your medication needs to be adjusted. Talking to your doctor can also give you a chance to think about whether you want to cut down or stop smoking or drinking.

What if I use street drugs while taking antipsychotics?

Some street drugs, such as marijuana, cocaine and amphetamines, may have effects that feel good in the short term, but they can cause symptoms to return or worsen. Using these drugs increases the risk of psychosis, even in people who do not have schizophrenia or another mental health problem. Street drugs may also interfere with your medication or worsen side-effects.

Will taking antipsychotics affect my ability to drive safely?

Antipsychotic drugs can be sedating, so it’s a good idea not to drive or operate other machinery until you know how the medication affects you.

Will taking antipsychotics affect my sex drive and function?

People who take antipsychotics can experience decreased sex drive or even problems in sexual functioning. Men may have difficulty getting or keeping an erection or ejaculating. Women may be unable to have an orgasm. Let your doctor know if you experience these side-effects. Often an adjustment in dose or change of medication can help. These drugs can also cause irregular periods and false-positive pregnancy results in women.

Is it safe to take antipsychotics while pregnant or breastfeeding?

Each woman’s situation is unique and should be discussed with her doctor. For any pregnant woman with a history of psychosis, the question of taking antipsychotics during pregnancy usually comes down to a risk-benefit analysis. Psychosis can affect prenatal care and a mother’s ability to parent her newborn child. When treatment with an antipsychotic helps to avoid a relapse or to reduce distress, the benefits of continuing the medication may outweigh the risks.

Antipsychotics are relatively safe to use during pregnancy and while breastfeeding. If used in high doses close to delivery, the baby may be born with temporary breathing difficulties and/or withdrawal symptoms (e.g., restlessness, feeding problems). Antipsychotic medications pass into breast milk and, depending on the dose, may cause drowsiness in the baby. There are ways, however, to minimize and manage the short-term symptoms that may occur. Your doctor can help you to choose the safest type of medication to take during pregnancy and breastfeeding, and to find a dose that will provide the maximum benefits with the minimum risk.

If you decide to stop taking medications during pregnancy or while breastfeeding, it is a good idea to see your doctor more often to help you monitor for a return of symptoms.

Is age an issue when taking antipsychotic medications?

The effectiveness and risks of antipsychotic medication can vary depending on the age of the person taking it.

Can children and teens use antipsychotics?

Antipsychotics can be used to treat children and teens with severe psychiatric disorders such as psychosis, bipolar disorder, Tourette syndrome, autism or severe aggression. Most often, psychotherapy also has an important role. Children and teens are more likely than adults to experience side-effects from these medications, especially the second generation (atypical) antipsychotics.

Can older adults use antipsychotics?

As people age into their 60s and older, they become more sensitive to medication and may require a lower dose. Being more sensitive also means that older people are more likely to experience side-effects than when they were younger. They are also more likely to have other medical problems and to be taking other medications, which could interact with antipsychotic drugs. Antipsychotics can increase the risk of falls, especially when taken with other drugs.

Tardive dyskinesia and other movement-related side-effects can develop in older adults who have used antipsychotics over a long period. Women are twice as likely as men to experience these effects.

Antipsychotic medications are sometimes used to calm older adults with psychosis related to dementia. However, use of antipsychotics by older adults has been associated with an increased risk of stroke. Other ways of calming the person should always be tried first, and when antipsychotics are needed, they should only be used until symptoms are relieved.

How to Safely Buy Oxycodone Online