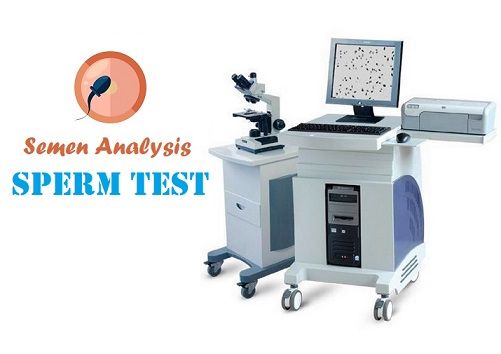 Your semen is then sent to a laboratory to measure the number of sperm present and look for any abnormalities in the shape (morphology) and movement (motility) of the sperm. The lab will also check your semen for signs of problems such as infections.

Often sperm counts fluctuate significantly from one specimen to the next. In most cases, several semen analysis tests are done over a period of time to ensure accurate results. If your sperm analysis is normal, your doctor will likely recommend thorough testing of your female partner before conducting any more male infertility tests. While at-home tests can give you a quick check of your sperm count, these won’t measure other things about your sperm, like shape or movement. So a normal result on a home test doesn’t guarantee fertility. You’ll need to talk with your doctor to get a complete picture of what’s going on.

Your doctor will explain your results to you. Different labs and physicians sometimes use different normal value ranges. Keep in mind that what your doctor considers to be normal or abnormal might differ from the values listed here. In general, these are the semen health factors that are evaluated in a semen analysis, the normal values according to the World Health Organization’s (WHO) 2010 guidelines, and what abnormal results could mean.

These semen parameters are only guidelines to consider when investigating what could be causing your infertility. Having better or worse numbers than what is listed here does not necessarily mean that you will or won’t be able to father a child.

The bulbourethral glands (which contains mucus to help the semen swim)

The seminal vesicles (which includes important nutrients for the sperm)

The testes (where the sperm come from)

What Is Considered Normal: Normal semen ejaculate is between 1.5 milliliters to 6 milliliters of fluid (about one-third of a teaspoon to a little over a teaspoon).

What Might Be Wrong If Results Are Abnormal: Low semen volume can be caused by an obstruction of the vas deferens (the duct that carries sperm from the testicles to the urethra), absence, or blockage of the seminal vesicle, partial retrograde ejaculation, or a hormonal imbalance.

Low volume can also be caused by stress over the test. If you are anxious about the test, talk to your doctor about ways to reduce your anxiety.

An abnormally high volume could be caused by inflammation of the reproductive glands.

What It Is: The total number of sperm found in the provided semen sample.

What Is Considered Normal: About 39,000,000 (or 39 x 10^6) sperm per ejaculate is considered the lower acceptable limit. Having a lower than normal count of sperm is sometimes called oligospermia. Azoospermia is when no sperm cells are found.

What Might Be Wrong If Results Are Abnormal: Having a lower sperm count may indicate a number of problems, including:

Abnormally low sperm counts can also be caused by certain medications, a recent illness accompanied by high fever, and exposure of the scrotum to heat (as in a hot tub). Smoking, obesity, and excess alcohol intake have been linked to low sperm count. Often, the cause for low sperm count is never found.

Azoospermia might be caused by a duct problem, a hormonal imbalance, or a problem with the testes.

What It Is: Sperm concentration is the number of sperm found in one milliliter of semen.

What Might Be Wrong If Results Are Abnormal: Low sperm concentration may be part of an overall low sperm count. It could also be related to an abnormally high ejaculate volume.

What It Is: Motility is the percentage of sperm that moves. For fertilization to occur, sperm must swim up the female reproductive tract to meet the egg. Being able to swim to their destination is essential. Total motility refers to any movement, while progressive motility refers to the forward movement in either a line or in a large circle.

What Is Considered Normal: At least 40% of the sperm should be moving, and at least 32% should swim in a forward movement or in large circles.

What Might Be Wrong If Results Are Abnormal: Asthenozoospermia is the term used for poor sperm motility. Poor sperm motility may be caused by illness, certain medications, nutritional deficiencies, or poor health habits like smoking. Many of the causes of low sperm count can also cause poor motility. Often the cause is never found.

What It Is: Sperm viability refers to the percentage of live sperm in the semen sample. This is especially important to measure if sperm motility is low, to differentiate between live non-motile sperm and dead sperm.

What Is Considered Normal: At least 58% of the sperm cells should be viable.

What Might Be Wrong If Results Are Abnormal: Necrozoospermia is the term used when all sperm in the semen sample is dead. There are a variety of causes for necrozoospermia, including many of the same things that can cause low sperm count.

Ask your doctor about fertility-approved lubricants and specialty condoms that are available for the collection of semen samples.

What It Is: Sperm morphology refers to the shape of the sperm cells. The lab technician closely examines a sample of sperm, checking to see approximately what percentage has a normal shape. The head, midsection, and tail are evaluated, as well as the measurements and proportions between each.

Before 2010, the World Health Organization had different requirements for sperm to be considered “normal” in shape. Labs may have evaluated sperm morphology according to the WHO criteria, or what is known as Kruger’s Strict criteria.

However, the WHO’s 2010 guidelines encourage the use of Kruger’s Strict criteria, based on the research of Thinus Kruger and Roelof Menkveld. Speak to your doctor to find out if they are using the outdated WHO criteria or Kruger’s criteria.

What Is Considered Normal: At least 4% should have a normal shape.

Sperm morphology is poorly understood, and because the evaluation is somewhat subjective, scores can vary on the same semen sample, in the same lab, using the same scoring techniques.

If sperm morphology is abnormal, but all the other semen parameters fall within normal limits, then male fertility could still be considered normal.

What It Is: When semen is ejaculated, it is thick and gelatinous. This is to help it adhere to the cervix. The semen eventually liquefies to enable the sperm to swim better.

What Is Considered Normal: Semen should liquefy within 20 to 30 minutes of ejaculation.

What Might Be Wrong If Results Are Abnormal: Delayed liquefaction may indicate a problem with the prostate, the seminal vesicles, or the bulbourethral glands, which are also known as the male accessory glands.

If delayed liquefaction occurs, your doctor might want to follow up with a post-coital test (PCT). This fertility test evaluates a female partner’s cervical mucus after sexual intercourse. If sperm are found and moving normally, the delayed liquefaction is not considered a problem.

What It Is: Semen pH is a measurement of how acidic or alkaline the semen is. The seminal vesicle fluid should be more alkaline, while the prostate fluids should be more acidic. In combination, they balance each other out in the semen. Semen that is too acidic may kill the sperm or prevent fertilization.

What Is Considered Normal: The semen should have a pH greater than 7.2. Currently, there’s no consensus on how more alkaline semen may affect fertility, and so there’s no upper pH limit according to the WHO guidelines.

What Might Be Wrong If Results Are Abnormal: Usually, low pH is accompanied by other abnormal measurements, including a low volume of semen or low sperm counts. This may point to an obstruction or absence of the vas deferens.

What Might Be Wrong If Results Are Abnormal: A higher than normal white blood cell count (leukocytospermia) may indicate an infection. Bacterospermia is when excessive levels of bacteria are found in semen.

Anywhere from 5% to 20% of men tested may be found to have leukocytospermia.

Some men may have leukocytospermia and not have any active infection or male fertility impairment. There is a theory that a possible cause of bacterospermia is untreated dental infections, though this has not been proven. SEE: How Long Does A Semen Analysis Take