How To do A Wet Finger Method For Effexor Withdrawal 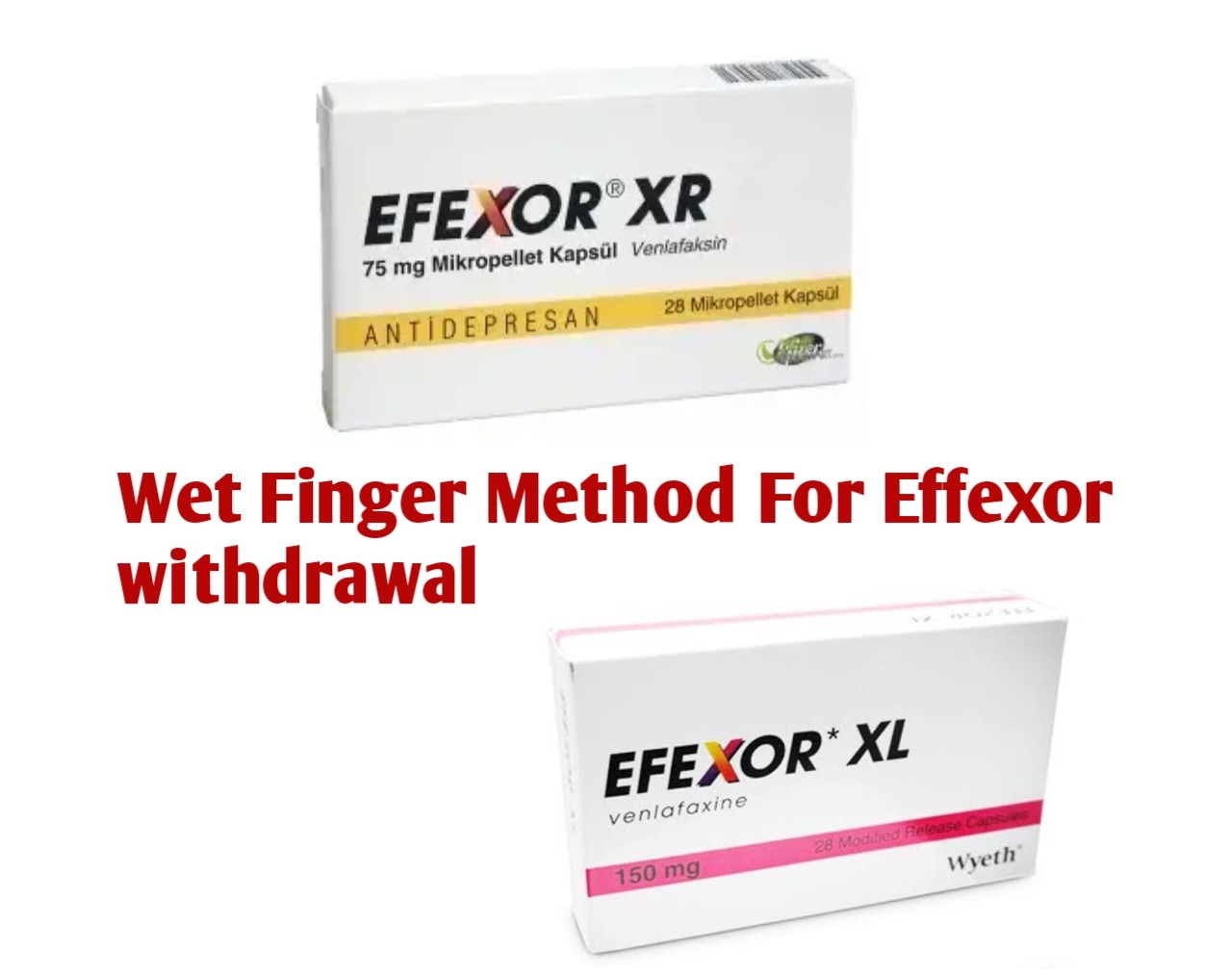 Effexor is a brand of Venlafaxine, a prescription drug. It comes as an oral tablet and an oral capsule. Venlafaxine oral tablet comes in immediate-release and extended-release forms. Both forms are only available as generic drugs. Generic drugs usually cost less than brand-name drugs.

Although Effexor is considered a non-addictive antidepressant drug, psychological addiction is possible and frequent abusers of the drug may also become physically dependent.

Effexor belongs to a class of antidepressant drugs classified as a serotonin-norepinephrine reuptake inhibitor (SNRI). A class of drugs is a group of medications that work in a similar way. These drugs are often used to treat similar conditions.

How Long Does It Take For Effexor to Work?

Generally, as soon as you start taking Effexor and it’s absorbed into your body, it goes to work. But it generally takes a few weeks before you notice any shifts in your mood and emotional state. Within a week or two, you’ll likely notice an improvement in your sleep, appetite, and overall energy. These changes can be an early sign the medication is working.

It may take up to eight weeks before there is an improvement in your mood and feelings. If you do not see any shifts in your overall mood after eight weeks, you need to talk to your healthcare provider.

They may suggest adjusting your dosage or a new medication. In the meantime, you should continue taking Effexor as it was prescribed to you.

What is Effexor Withdrawal?

Among antidepressants, Effexor is one of the most difficult to quit. Antidepressant discontinuation syndrome (ADS) is characterized by a variety of withdrawal symptoms that occur because of physical dependence. Dependence develops with the regular use of antidepressants. Though it usually develops in six weeks or more, it can develop within just three weeks in some cases.

The presence and severity of Effexor withdrawal symptoms do not seem to be correlated with dose. Currently, it is impossible to reliably predict who will experience symptoms of ADS.

Venlafaxine has one of the highest rates of “brain zap” frequency associated with antidepressant discontinuation. Brain zaps are an electric shock sensation that may also include visual disturbances. Doctors are not sure why this phenomenon occurs. Although this symptom resolves quickly in most people, others experience brain zaps for months or years.

Other common Effexor withdrawal symptoms can be uncomfortable or even debilitating, including:

Studies show that patients can begin feeling withdrawal symptoms just hours after missing a dose. Although not typically medically serious, these symptoms can be quite uncomfortable. Some patients report feeling akin to an electric shock, or a “brain shiver” when late taking their medication. No treatment currently exists for these jolt-like or “popping” sensations, which can affect up to 78% of people who take the drug.

Over time, patients experience increasingly more symptoms, which can persist for weeks. Moreover, many patients report a return of their depression, sometimes within 24 hours of stopping their Effexor medication.

How do you counteract Effexor withdrawal?

Studies have shown that the most reliable way to prevent or minimize withdrawal symptoms is to gradually taper the Effexor dose over a minimum of two weeks, although a longer taper may be needed. No matter what, it is important to taper Effexor under a doctor’s supervision, especially if you are taking Effexor for a mental health condition like depression. Suddenly stopping Effexor while leaving your mental health untreated may be dangerous. 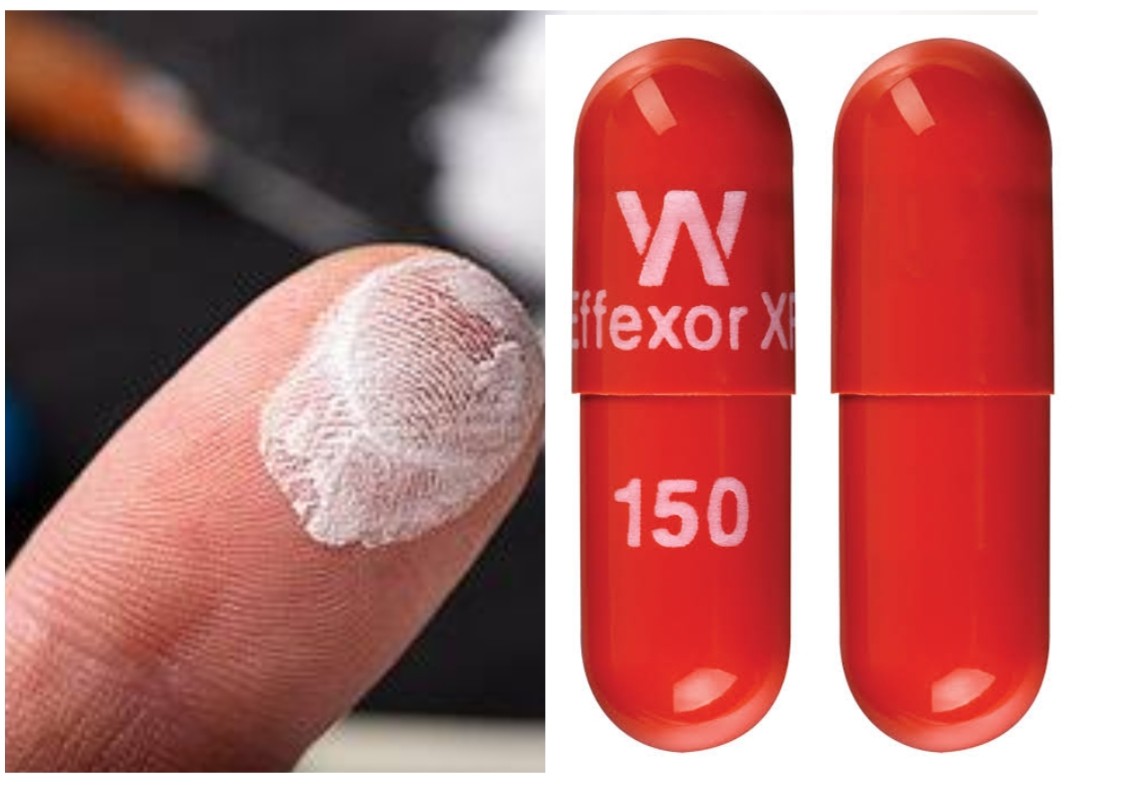 What is the Wet Finger Method For Effexor Withdrawal?

According to Meds Safety the “Wet Finger Method” is one of the many Effexor withdrawal strategies adopted to ease the side effects of Effexor withdrawal.  It involves emptying the capsule contents into a saucer, or bowl – lick your finger, dab some of the content, and take what you think would be an appropriate weaning amount.  Anecdotal reports describe the process as follows:

Step 1: Start with 3 days by taking three wet fingers off the top of the capsule. If no side effects, continue to the next step.

Step 2: Next step is 5 days of taking five wet fingers off the top of the capsule. If no side effects, continue to the next step.

Step 3: The last step is 5 days of taking seven wet fingers off the top. If no side effects continue to the next step. Get off of Effexor completely. Hopefully with minimal side effects.

The Second is the “Bead Counting Method” this method involves counting capsules to determine how many are in each respective dose and removing 5 or six every 3- 4 days or so.

There are no scientific studies to back up anecdotal evidence which claims that the wet finger method works for Effexor withdrawal. In fact, using Effexor in that manner is inappropriate and increases the risk of side effects and accidental overdose by children and pets. Some of the side effects of antidepressant abuse include impaired coordination, increased sense of confusion, fainting, dizziness, and convulsions among others. Taking too much of an antidepressant can also cause serotonin syndrome, which can be life-threatening if undetected or untreated.

What are the mild side effects of Effexor?

In most cases, these side effects should be temporary. And some may be easily managed, too. But if you have any symptoms that are ongoing or that bother you, talk with your doctor or pharmacist. And don’t stop using Effexor unless your doctor recommends it.

Effexor may cause mild side effects other than the ones listed above. See the Effexor medication guide for details.

Note: After the Food and Drug Administration (FDA) approves a drug, it tracks the side effects of the medication. If you’d like to notify the FDA about a side effect you’ve had with Effexor, visit MedWatch.

What are the serious side effects of Effexor?

If you develop serious side effects while taking Effexor, call your doctor right away. If the side effects seem life-threatening or if you think you’re having a medical emergency, immediately call 911 or your local emergency number.