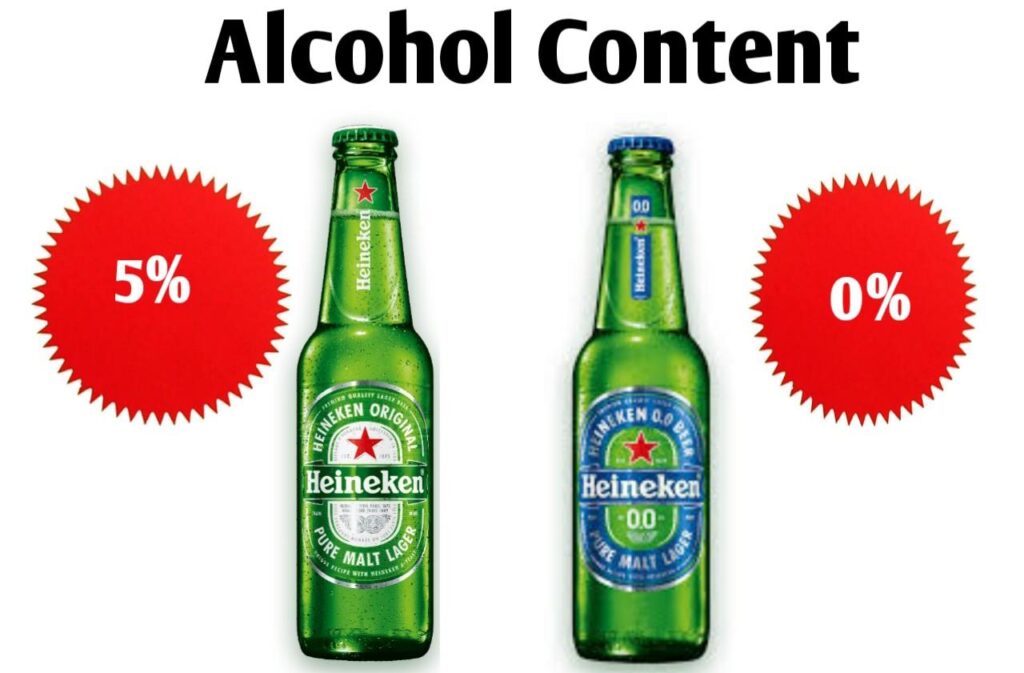 Heineken is an alcoholic beverage produced by the Dutch brewing company Heineken International. The company is known for its signature green bottle and red star, Heineken’s origins are dated back to a young Dutch entrepreneur who in 1894 acquired money from his wealthy mother in order to purchase and renovate an old brewery in the centre of Amsterdam. Since 1975, most Heineken brand beer has been brewed at their brewery in Zoeterwoude, Netherlands. In 2011, 2.74 billion litres of Heineken brand beer were produced worldwide, while the total beer production of all breweries fully owned by the Heineken Group over all brands was 16.46 billion litres globally. Nigerian Breweries brew the Heineken lager locally in Nigeria under a franchise agreement with Heineken & Co.

How Much Alcohol is in Heineken?

Heineken Lager Beer, or simply Heineken is a pale lager beer with 5% alcohol Content. Heineken light has 3.3% alcohol by volume while the new Heineken 0.0 has zero alcohol per 33cl bottle. However, according to the Independent, Heineken is to cut the alcohol content of one of its major brands after signing up to a Government deal on public health. This Month, Heineken was also fined £2m for forcing publicans to sell “unreasonable” amounts of its own beers and ciders. The pubs code adjudicator (PCA), an official who oversees the relationship between pub-owning companies and their tenants, said Heineken had “seriously and repeatedly” breached laws that protect publicans from company behavior aimed at prohibiting pubs selling competitor brands. After an investigation that lasted more than a year, the PCA said Heineken – via its pubs business, Star – had broken the rules despite the regulator’s repeated interventions.

Can you drink Heineken and Drive?

Every 53 minutes, a person in the United States dies in an alcohol-related traffic accident. That’s 28 lives lost each and every day. The National Institute on Alcohol Abuse and Alcoholism reports that nearly 88 percent of those aged 18 and older have consumed alcohol at least once in their lifetime, and about 57 percent have had an alcoholic beverage in the past month.

Reaction Time – Alcohol can slow reflexes, which can decrease the ability to react swiftly to changing situations.

Tracking – Alcohol can decrease the ability to judge the car’s position on the road, or the location of other vehicles, center line, or road signs.

Concentration – Alcohol may cause attention to driving to decrease and/or drowsiness to occur.

Comprehension – Alcohol can hinder the ability to make rational decisions.

Coordination – Reduced eye/hand/foot coordination can be caused by drinking too much alcohol.

It is estimated that more than 10,000 young people in the United States are killed and 40,000 are injured in auto accidents when alcohol is involved. The National Highway Traffic Safety Administration estimates more than 26,000 lives have been saved since the drinking age was increased to 21.

If You Drink Alcohol Socially, What Helps Ensure Safe Driving?
heineken alcohol content
October 15, 2020 UncategorizedPublic HealthComments Off on How Much Alcohol Content is in Heineken?