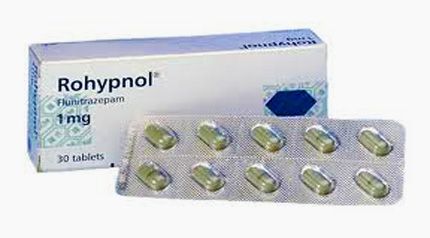 Rohypnol is a tranquilizer about ten times more potent than Valium. The drug is available as a white or olive-green pill and is usually sold in the manufacturer’s bubble packaging. Users crush the pills and snort the powder, sprinkle it on marijuana and smoke it, dissolve it in a drink or inject it.

Traditionally, Rohypnol tablets were odorless and colorless, characteristics that made the drug notoriously hard to detect. However, the more recent versions of Rohypnol have blue dye in the pills, which is not visible until the tablet is placed into a light-colored drink. The drink turns blue if such a tablet is dissolved in it. In darker drinks, this may not be as apparent, and it is possible that individuals given this drug will not notice due to alcohol intoxication or dark environments, such as in bars and clubs.

Rohypnol has been used to commit sexual assaults because it renders the victim incapable of resisting, giving it the reputation of a “date-rape” drug.

Rohypnol users often describe its effects as “paralyzing.” The effects start twenty to thirty minutes after taking the drug, peak within two hours, and may persist for eight or even twelve hours. A person can be so incapacitated (made unable to act) they collapse. They lie on the floor, eyes open, able to observe events but completely unable to move. Afterward, memory is impaired and they cannot recall any of what happened.

The person experiences loss of muscle control, confusion, drowsiness, and amnesia. Rohypnol is sold in Europe and Latin America as a sleeping pill, but Rohypnol is illegal in the United States and Nigeria. Recently, members of an Indian syndicate that sold drugs to the rich and affluent people coordinated by one Indian, Inderpreet Singh, aka Bobby were arrested with 0.208kg Rohypnol (646) tablets.

The Risks of Rohypnol Use

Although Rohypnol isn’t legally prescribed in the United States, other benzodiazepine drugs are commonly used in the treatment of anxiety and insomnia. Even the legal benzodiazepine drugs, however, are only approved for the short-term use of a few weeks. This is due to the fact that drug tolerance and dependence can develop very quickly. Drug dependence can lead to drug addiction, in which people crave the drug, are unable to control their consumption of it, and continue to use it despite negative consequences.

There are several types of testing methods that can be adopted to detect Rohypnol in a person’s body. These can differ in their sensitivity and effectiveness. They also have different windows for how long they are capable of detecting drug use.

Urine screening for Rohypnol is often the preferred method to detect the drug when it is possible to conduct the test within 60 hours after its ingestion. However, sometimes a urine test might be able to identify the substance several days after it was consumed, especially if it was administered in very high doses.

Blood testing may be beneficial because it can detect Rohypnol concentrations as low as 4 ng/ml. A blood test can detect the drug up to 24 hours after it was ingested. This can be incredibly useful when a victim needs to prove the drug’s involvement in a sexual assault.

A hair test can be administered two weeks after the drug was taken. Like most other medications, benzodiazepines like Rohypnol can be detected in hair for at least 30, and perhaps up to 90 days after its ingestion.

Some companies offer kits that a person can use to take a urine sample and then send it in for screening. While this is an option for some, it is essential to remember that a drug test administered by medical professionals is generally more reliable.

Considering that Rohypnol is used intentionally for recreational purposes as well as a date rape drug, detox and rehab facilities can perform a screening. This is typically required before a person begins undergoing substance abuse treatment.

There are a number of very serious effects associated with Rohypnol. The drug is known as a “date-rape” drug because it tends to cause disinhibition and amnesia. People who take the drug, either knowingly or unknowingly, may not remember anything that happened while they were under its influence. The effects are intensified when the drug is combined with alcohol, leading to memory loss of up to 24 hours.

Rohypnol is a sedating drug, and as such can cause extreme drowsiness, slurred speech, decreased blood pressure, and impaired coordination. It can also cause paradoxical effects such as aggression, nightmares, and seizures. Confusion is common. Many overdose deaths are attributed to respiratory depression, which is especially common when Rohypnol is combined with alcohol.

When people become dependent on Rohypnol, withdrawal symptoms also become part of the picture. There are a wide variety of possible withdrawal symptoms. These include vomiting, headache, insomnia, heart problems, seizures, hallucinations, and delirium. It is important that Rohypnol detox be supervised medically because withdrawal can be dangerous and even fatal.

Rohypnol is widely abused, in part, because it is relatively inexpensive. However, it isn’t a safe drug to take recreationally in any amount. The risks are too high and the possible consequences too great. READ: How Rohypnol Affects the Brain