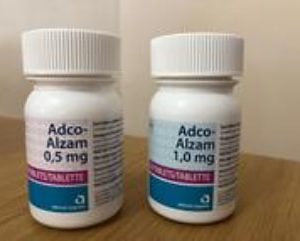 Adco Alzam is a brand of Alprazolam produced by Adcock Ingram a leading South African pharmaceutical manufacturer listed on the Johannesburg Stock Exchange. The Company manufactures, markets, and distributes a wide range of healthcare products and is a leading supplier to both the private and public sectors of the market.

Adco Alzam is used to treat anxiety and panic disorders. One dose of Adco Alzam can last anywhere from 31 hours to 134.5 hours (5.6 days) in the body, depending on factors related to the individual who took it. However, the calming, relaxing, and sedative effects of Adco Alzam usually wear off within about eight to twelve hours.

Adco Alzam is taken by mouth and quickly absorbed into the bloodstream. Effects should be noticed within an hour and the medicine reaches peak concentrations in the body after one to two hours. People who take Adco Alzam regularly can build up a tolerance to it and effects, such as a feeling of calm or sedation, may take longer to develop or not be felt as strongly as before.

Adco Alzam is usually prescribed three times a day because its effects in the body (calming, sedation, relaxing) tend to wear off within eight hours for most people. However, one dose of Adco Alzam remains detectable in the body for two to five days – the exact length of time depends on several factors specific to the individual who took the dose.

What factors determine the half-life of Adco Alzam?

Factors that determine how long a dose of Adco Alzam will persist in the body for include:

A person’s age: Adco Alzam lasts for longer in elderly people. The average half-life in the elderly is 16.3 hours, compared to 11.2 hours in younger, healthy adults.

Weight: Adco Alzam lasts for longer in heavier people, because obesity makes it harder for your body to break down Adco Alzam. The average half-life in people who are overweight/obese is 21.8 hours, compared to 11.2 hours in young, healthy adults.

Metabolism: People who exercise a lot or who have a faster metabolism clear Adco Alzam faster than those who don’t exercise or do any physical activity. The half-life of Adco Alzam is shorter in these people.

Dosage: It takes longer for your body to metabolize higher dosages of Adco Alzam. The bigger the dose of Adco Alzam, the longer the half-life.

Length of time taking Adco Alzam: If you take Adco Alzam regularly, then you will have a higher concentration in your bloodstream and it will take longer to fully eliminate it all. But because you have built up a tolerance to the drug, you may not necessarily feel its effects for longer.

Interacting medications: Adco Alzam lasts longer when it is taken with drugs that inhibit CYP3A4 (eg, erythromycin, ketoconazole, nefazodone, oral contraceptives), one of its metabolizing pathways. Other drugs (such as carbamazepine, St John’s wort), may decrease the half-life of Adco Alzam.

Smoking: The half-life of Adco Alzam may be reduced by up to 50% in smokers compared to nonsmokers. This means that smokers metabolize Adco Alzam more quickly than nonsmokers.

Alcohol: Alcohol can increase the effects and half-life of Adco Alzam, and can lead to dangerous side effects which could be fatal.

How long does Adco Alzam stay in your system?

Studies have shown that the half-life of Adco Alzam ranges from 6.3 to 26.9 hours. It is important to realize that half-life is a figure that is an estimate of the time it takes for the concentration or amount in the body of that drug to be reduced by exactly one half (50%). After four to five half-lives, 97% of a drug has cleared from the body, and the drug is no longer considered to be having any effect. However, this does not mean that it won’t be detectable by a drug test, as this depends on how specific and sensitive the drug test is.

If we use the average half-life of Adco Alzam, which is 11.2 hours, then the following is estimated for a 1mg dose of Adco Alzam:

In theory, we can see that after 56 hours (2.3 days), almost all the original Adco Alzam dose (slightly less than 97%) has been eliminated in people whose Adco Alzam half life is 11.2 hours. However, in some people, the half-life of Adco Alzam is 26.9 hours. In these people, it will take approximately 134.5 hours (5.6 days) for almost 97% of a dose of Adco Alzam to be eliminated.

The body absorbs Adco Alzam quickly after a person takes it. Peak levels in the blood occur 1–2 hours after taking a dose. However, the person will feel the effects before levels peak. One study, which examined the effects of Alprazolam in 14 healthy people, found that participants felt the effects of the medication in under 1 hour, with an average onset time of 49 minutes. ALSO READ:B704 Pill: Uses, Side Effects, Addiction, Reviews

How Long Does Bensedin Take to Work
May 9, 2021 UncategorizedPublic HealthComments Off on How Long Does Adco Alzam Take To Work?