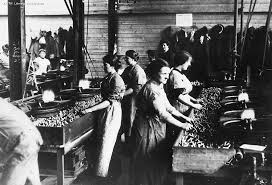 According to the National Institute for Occupational Safety and Health (NIOSH), Total Worker Health is defined as workplace policies, programs, and practices that integrate protection from work-related safety and health hazards with promotion of injury and illness prevention efforts to advance worker well-being. The research and regulation of occupational safety and health are a relatively recent phenomenon. As labor movements arose in response to worker concerns in the wake of the industrial revolution, worker’s health entered consideration as a labor-related issue.

The work place is a potentially hazardous environment where millions of employees pass at least one-third of their life time. This fact has been recognized for a long time, although developed very slowly until 1900. There has been an awareness of industrial hygiene since antiquity.

The environment and its relation to worker health was recognized as early as the fourth century BC when Hippocrates noted lead toxicity in the mining industry. In the first century AD, Pliny the Elder, a Roman scholar, perceived health risks to those working with zinc Occupational Health and Safety 11 and sulfur. He devised a face mask made from an animal bladder to protect workers from exposure to dust and lead fumes. In the second century AD, the Greek physician, Galen, accurately described the pathology of lead poisoning and also recognized the hazardous exposures of copper miners to acid mists.

In the middle Ages, guilds worked at assisting sick workers and their families. In 1556, the German scholar, Agricola, advanced the science of industrial hygiene even further when, in his book De Re Metallica, he described the diseases of miners and prescribed preventive measures. The book included suggestions for mine ventilation and worker protection, discussed mining accidents, and described diseases associated with mining occupations such as silicosis. Industrial hygiene gained further respectability in 1700 when Bernardo Ramazzini, known as the “father of industrial medicine,” published in Italy the first comprehensive book on industrial medicine, De Morbis Artificum Diatriba (The Diseases of Workmen).

In England in the 18th century, Percival Pott, as a result of his findings on the insidious effects of soot on chimney sweepers, was a major force in getting the British Parliament to pass the ChimneySweepers Act of 1788. The passage of the English Factory Acts beginning in 1833 marked the first effective legislative acts in the field of industrial safety. The Acts, however, were intended to provide compensation for accidents rather than to control their causes. Later, various other European nations developed workers’ compensation acts, which stimulated the adoption of increased factory safety precautions and the establishment of medical services within industrial plants. In the early 20th century in the U.S., Dr. Alice Hamilton led efforts to improve industrial hygiene. She observed industrial conditions first hand and startled mine owners, factory managers, and state officials with evidence that there was a correlation between worker illness and exposure to toxins. She also presented definitive proposals for eliminating unhealthful working conditions. At about the same time, U.S. federal and state agencies began investigating health conditions in industry.

In 1908, public awareness of occupationally related diseases stimulated the passage of compensation acts for certain civil employees. States passed the first workers’ compensation laws in 1911. And in 1913, the New York Department of Labor and the Ohio Department of Health established Occupational Health and Safety 13 the first state industrial hygiene programs. All states enacted such legislation by 1948. In most states, there is some compensation coverage for workers contracting occupational diseases.

(1) the Metal and Nonmetallic Mines Safety Act of 1966

Today, nearly every employer is required to implement the elements of an industrial hygiene and safety, occupational health, or hazard communication program and to be responsive to the Occupational Safety and Health Administration (OSHA) and its regulations. However, concrete approach to the control of occupational diseases became valid in most countries after the twentieth century. Emphasis was then given to the control of working hazards, and multidisciplinary approach to such effective measures in which at least triparty: the employer, the employee, and the competent authority are together participating in the problem solution. Much improvement in the workers health protection has been made in developed countries in the field of industrial hygiene and safety, and occupational medicine. There is still a long distance ahead for developing countries.

Scope and purpose of occupational health and safety standards

Conventions and Recommendations on occupational safety and health may serve several purposes, acting as:

Principles of Occupational Health and Safety

5 Major Occupational Diseases Every Worker Must Watch out for