Hexen: Uses, How it works, Side Effects, Addiction 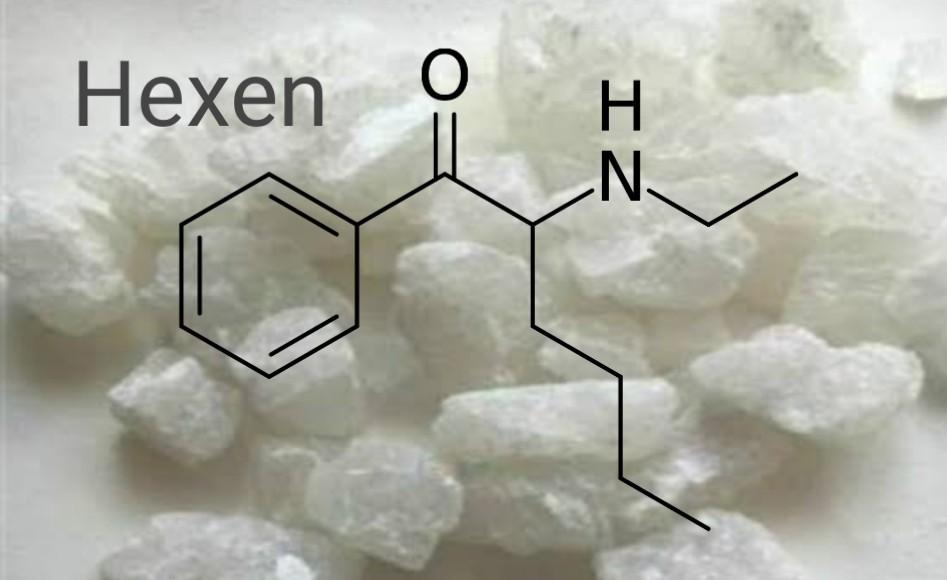 Hexen (HexEn) is a synthetic drug containing N-Ethylhexedrone or NEH a synthetic cathinone that acts as a norepinephrine–dopamine reuptake inhibitor (NDRI), Hexen is a novel psychoactive substance specifically designed to mimic the features of prohibited substances and bypass drug laws. It is one of a number of substances collectively referred to as “bath salts”.

N-Ethylhexedrone the active ingredient in Hexen was first mentioned in a series of patents by Boehringer Ingelheim in the 1960s which led to the development of the better-known drug methylenedioxypyrovalerone (MDPV).

Since the mid-2010s, Hexen has been sold online as a designer drug. In 2018, Hexen was the second most common drug of the cathinone class to be identified in Drug Enforcement Administration seizures.

Very little data exists on the human pharmacokinetics and pharmacodynamics of N-ethylhexedrone and many other recently introduced substituted cathinones, aside from post-mortem results in overdose cases. Like amphetamines, synthetic cathinones exert their stimulating and sympathomimetic effects via increasing the synaptic concentration of catecholamines such as dopamine, serotonin, and norepinephrine. It appears that Hexen has a high preference for the dopamine transporter.

How is Hexen (N-Ethylhexedrone) used?

Internet searches and self-reports from case studies reveal that Hexen (N-Ethylhexedrone) is most often insufflated (strongest effects) or vapor inhaled (weaker and short-acting effects) but may also be administered orally, rectally, intravenously, smoked in e-cigarettes, or by ‘hot rails’, i.e., inhaling through the nose by way of a heated glass tube.

Very high doses of 100-250 mg Hexen (N-Ethylhexedrone) have also been reported including a series of repeated doses totaling up to 350 mg in a short episode.

How long do the effects of Hexen (N-Ethylhexedrone) last?

Again, there are no published reports on absorption or distribution. However, user reports of short-lived psychoactive effects suggest that Hexen (N-Ethylhexedrone) is absorbed, distributed, and metabolized relatively quickly.

Snorting: The effects of Hexen (N-Ethylhexedrone) begin 2 min after intranasal administration. The greatest effects were observed after about 20–25 min and lasted up 2–3 h while the effects are diminished by ~4–8 h.

Oral: The effects of Hexen (N-Ethylhexedrone) begin 20-25 min after oral administration. The greatest effects after oral dosing were observed after ~ 50-60 min.

How long does Hexen (N-Ethylhexedrone) stay in your body?

Hexen (N-Ethylhexedrone) does not show up on most drug tests. Although some urine and blood tests exist for bath salts and their breakdown products, they are rare and expensive. For this reason, they are often limited to forensics. Even when they can be tested, Hexen (N-Ethylhexedrone) cannot be detected after 48 to 72 hours after use. There are no saliva or hair tests for bath salts at the time of writing this article.

Given the lack of scientific evidence, the addictive potential of synthetic cathinones like Hexen (N-Ethylhexedrone) is inconclusive. The most credible information available is limited to case reports and anecdotal accounts of compulsive use.

The data on trends of administration and doses from the internet forums suggest a potential for dependence similarly to other cathinones. In a case report, a 56-year-old man reported that he had purchased 25 g of  Hexen (N-Ethylhexedrone) from an internet supplier. He claimed that after using it every day for 3 months by nasal insufflation and/or rectal insertion, he developed a ‘psychological addiction’ to it. However, this statement is a single self-report in a case study.

What are the side effects of Hexen (N-Ethylhexedrone)?

Mybulen Tablets: Uses, How It Works, Dosage, Side Effects