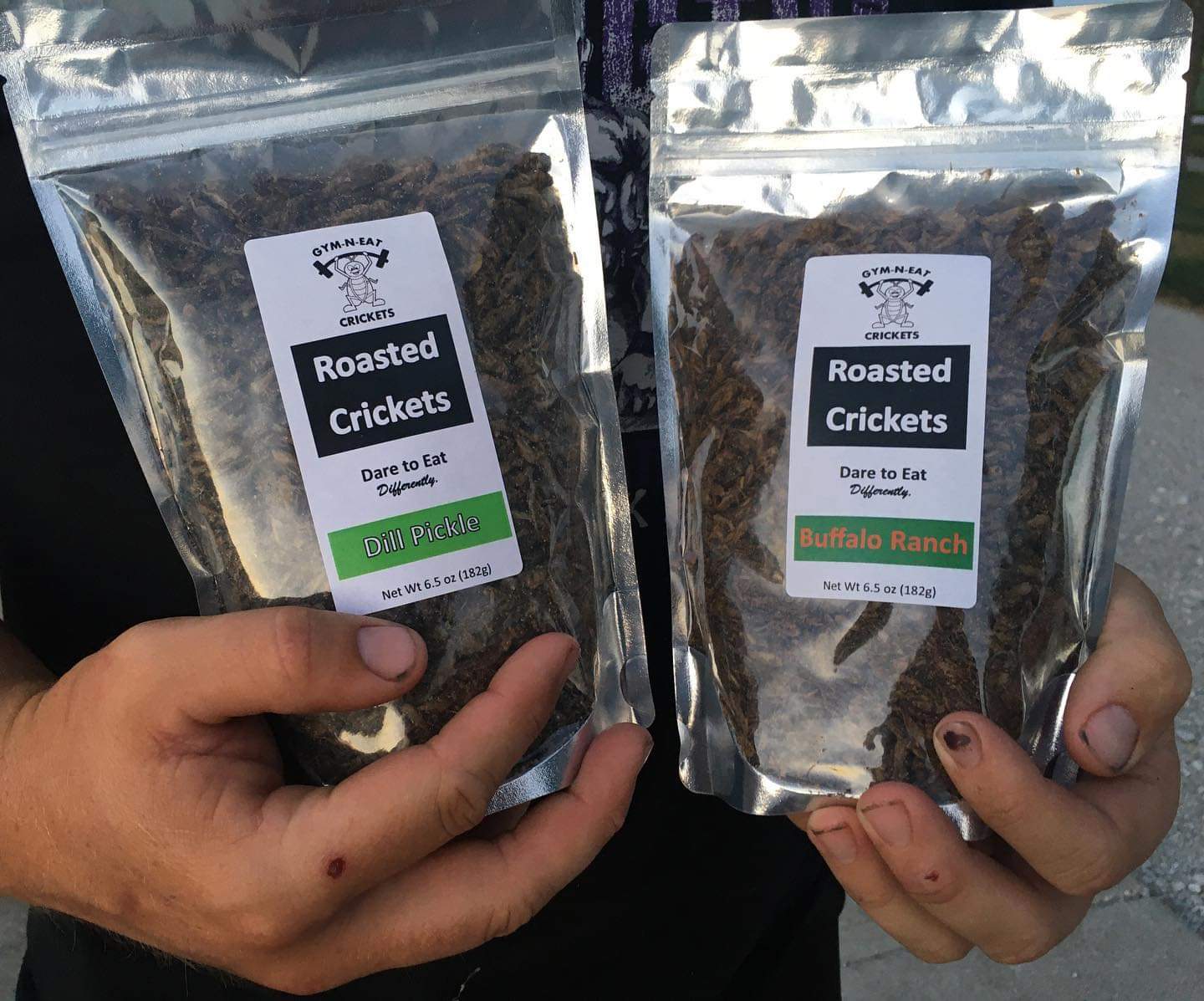 Crickets are medium-sized to large insects. Like their relatives the grasshoppers and katydids, they have chewing mouthparts, and their back legs are larger and stronger than the other two pairs. They have rounded heads, antennae that are long and thin, and their wings bend down on the sides of their body. Unlike katydids, crickets often look flat, or at least the top of their body is flattened.

Cricket farming is already a thriving business in Asia, Africa, and South and Central America. In those areas of the world, people raising crickets are earning a good income.

People and businesses have been breeding crickets as food for chickens, reptiles, and fish for 70 years. These days the insect farming business is shifting to expanding its niche in the human food markets. 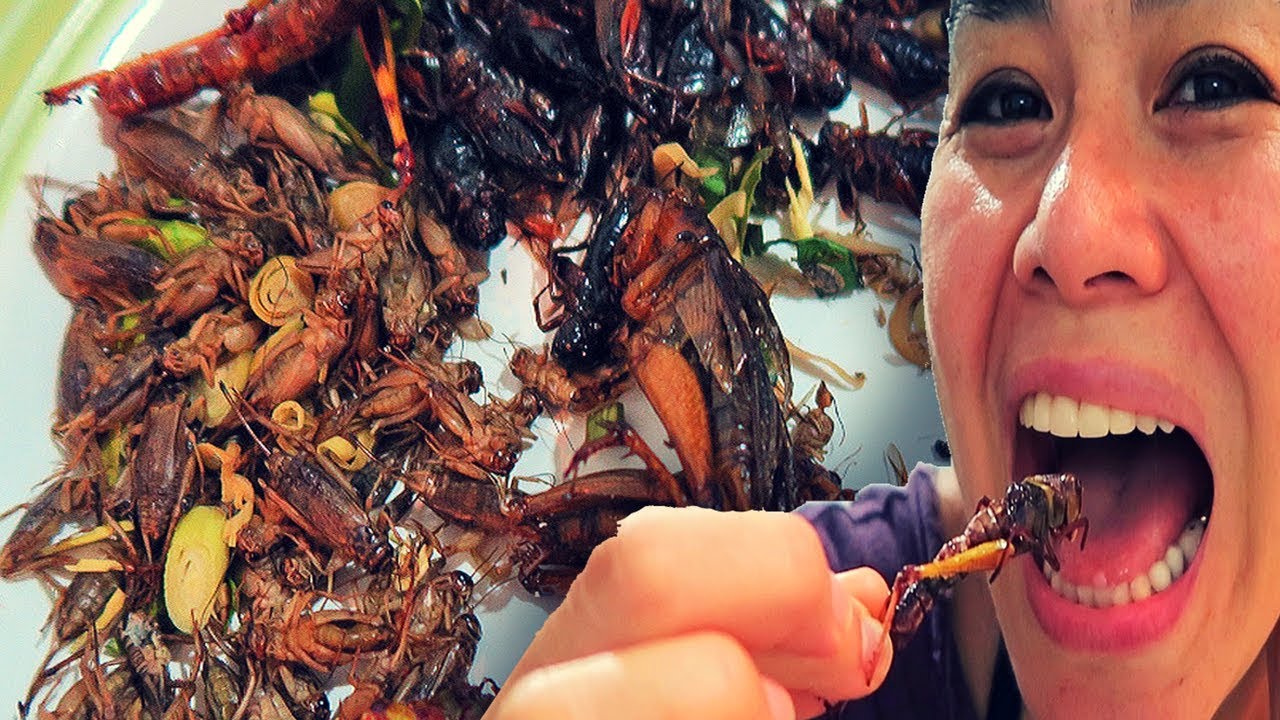 How do people eat crickets?

Generally, crickets are either eaten whole (roasted, pan-fried, etc.) or they’re dry roasted and ground into a powder. Given their small size, there’s really no culinary reason to chop them up.

Most consumers prefer farmed crickets over those collected in the wild because they taste better. Up to 80 percent of a cricket is edible and digestible.

Are Crickets Safe For Human Consumption?

There has been growing interest in eating cricket because they contain tons of protein without a lot of fat or calories. Crickets contain more protein per bite (per density) than beef or chicken can provide per bite. For example, in a 100-gram cricket, there are 16-21 grams of protein.

According to the North American Coalition for Insect Agriculture (NACIA), crickets as human food are high in protein and can be prepared by cooking or by being ground into flour. The flour becomes a high protein ingredient in various food such as tortilla chips and protein bars.

However, eating crickets also comes with a lot of baggage and many of us are not aware. In this article, we shall be looking at the dangers of consuming crickets.

Even though some studies, concluded that cricket consumption was safe and  was not associated with major gastrointestinal side-effect, other  studies have shown that eating crickets can come with the following dangers:

An experimental study involving 75 house cricket farms detected parasites in 244 (81.33%) of the samples among which 30.33 were potentially pathogenic for humans. Edible insects like crickets are an underestimated reservoir of human parasites.

Parasites from edible insects like crickets are able to multiply in humans, which contributes to their survival and also permits serious infections to develop from just a single organism. Their complex lifecycles, varied transmission routes, and prolonged periods between infection and symptoms mean that the public health burden and relative importance of different transmission routes are often difficult to assess.

The discomfort of horsehair worms

Horsehair worms are internal parasites of crickets and other insects like grasshoppers, cockroaches, and beetles. Horsehair worms are active and often observed during the late summer or fall months. People sometimes find them after opening up a cricket.

Although horsehair worms are harmless to humans, if humans ingest the worms, they may encounter some mild discomfort in the intestinal tract, but infection never occurs. However new studies have reported that some species are parasitic on humans, but invertebrates and other vertebrates serve as hosts.

While most crickets will only have one worm in them, it’s not uncommon for several to emerge at once and start mating with each other. A record 32 worms were seen erupting from a single cricket host.

Tapeworms have been found in crickets. Tapeworm infection is caused by ingesting food or water contaminated with tapeworm eggs or larvae. If you ingest certain tapeworm eggs, they can migrate outside your intestines and form larval cysts in body tissues and organs (invasive infection).

Eating tape worm-infested cricket can have very unpleasant consequences. The most serious symptoms happen when tapeworm larvae invade parts of your body outside the intestines. You may have serious problems with your nervous system, including seizures, or you could get headaches, masses or lumps, allergic reactions to the larvae, or problems with your vision.

Another reason you should think twice before eating crickets is the risk of cryptosporidium infection. Cryptosporidium is a microscopic parasite that causes the diarrheal disease cryptosporidiosis. Both the parasite and the disease are commonly known as “Crypto.” There are many species of Cryptosporidium that infect animals, some of which also infect humans. Cryptosporidiosis is normally not a serious disease in healthy people. But it can lead to a life-threatening illness for people with a weak immune system.

Benefits of Healthy Eating For Adults and Children