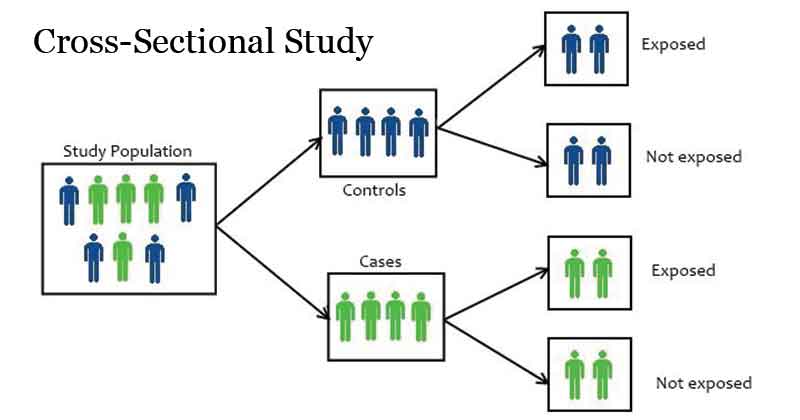 A cross-sectional study involves looking at data from a population at one specific point in time. The participants in this type of study are selected based on particular variables of interest. Cross-sectional studies are often used in several fields , but this method is also used in many other areas, including social science and education. Cross-sectional studies are observational in nature and are known as descriptive research, not causal or relational, meaning that you can’t use them to determine the cause of something, such as a disease. Researchers record the information that is present in a population, but they do not manipulate variables.

A cross-sectional survey may be purely descriptive and used to assess the burden of a particular disease in a defined population. For example a random sample of schools across London may be used to assess the prevalence of asthma among 12-14 year olds.

Analytical cross-sectional surveys may also be used to investigate the association between a putative risk factor and a health outcome. However this type of study is limited in its ability to draw valid conclusions as to the association between a risk factor and health outcome. In a cross-sectional survey the risk factors and outcome are measured simultaneously, and therefore it may be difficult to determine whether the exposure proceeded or followed the disease.

In practice, cross-sectional studies will include an element of both types of design.

Issues in the design of cross-sectional surveys

The sample size should be sufficiently large enough to estimate the prevalence of the conditions of interest with adequate precision. Sample size calculations can be carried out using sample size tables or statistical packages such as Epi Info.

the total number of individuals in a population who have a disease or health condition at a specific period of time, usually expressed as a percentage of the population.

Note that for continuous variables such as blood pressure or weight, prevalence may only be calculated when the variable is divided into those which fall below or above a particular pre-determined level. Alternatively, mean or median levels may be calculated.

In analytical cross-sectional studies, the odds ratio can be used to assess the strength of an association between a risk factor and health outcome of interest, provided that the current exposure accurately reflects the past exposure.