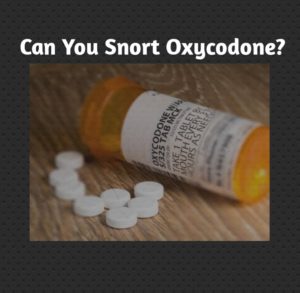 Percocet or Oxycodone and acetaminophen is a prescription drug used to treat moderate to severe pain. It is a combined opioid/non-opioid pain reliever marketed by Endo International plc, formerly Endo Pharmaceuticals. Oxycodone, the opioid part of the medication is a strong narcotic pain-reliever and cough suppressant similar to morphine and rapidly produces tolerance. Individuals regularly taking Percocet will need higher and higher doses to produce the same effect. This can lead to addiction and adverse health effects. The abuse of prescription medications has been on the rise due to increased availability and the belief that these drugs are safer to abuse than illicit intoxicants. However, prescription opioids containing Oxycodone can be just as addictive as illegal drugs and have the potential for overdose. In fact, the Canadian Medical Association Journal reported in 2009 that deaths related to oxycodone in Ontario increased fivefold between 1991 and 2004.

What is Oxycodone Snorting?

Snorting of Oxycodone involves grinding Percocet or crushing Percocet pills or any other medication containing oxycodone into powder by chopping the drug with a razor blade, on a hard surface, or pounding with mortar and pestle. The drug is then divided on a flat surface into “lines,” then using a straw or rolled paper. The powder is then forcefully breathed up into the nasal cavity. Oxycodone is also snorted in liquid form, it is very common to find recreational drug users snorting antitussives and cough suppressants containing the drug.

Why Do People Snort Pills?

Snorting is a common form of drug abuse in which people take a drug in powdered form and forcefully breathe it up into the nasal cavity. People snort because they achieve a faster onset; the drug is absorbed almost immediately into the bloodstream through the soft tissues in the nasal cavities where it can quickly travel to the brain, producing a sudden and intense feeling of euphoria commonly called a “Percocet or oxycodone high,” but not without severe consequences. Percocet or oxycodone snorting increases a person’s tolerance to the drug’s effects in relatively short order leading to the need for increasing amounts of the drug, and eventually the development of Percocet dependence. As tolerance builds with every line of Percocet snorted the “high” decreases and causes the person to need more of the drug to experience the same effects as before. This dangerous pattern of use eventually leads to Percocet addiction. SEE: Snorting Valium

What Are The Side Effects of Snorting Oxycodone?

It is quite common to hear questions like: What happens if you snort oxycodone? Snorting oxycodone comes with a lot of side effects. Scott Gottlieb, M.D., FDA Commissioner, commented on the risks associated with the drug snorting  emphasizing that there are very real consequences to snorting any powder, not to mention the societal dangers of promoting drug abuse.” A recent study published by the Journal of Drug and alcohol dependence revealed that Snorting oxycodone rapidly produced psychoactive effects indicative of substantial abuse liability. The side effects of snorting Oxycodone include:

The Substance Abuse and Mental Health Services Administration (SAMHSA) maintains a high-quality online treatment finder for a range of mental and behavioral conditions including Oxycodone addiction. The group also has a crisis helpline, which you can call when there is any issue related to addiction involving yourself, family members, or friends. The treatment involves entering a rehabilitation program that specializes in treating opioid abuse and committing to therapy sessions that typically last for three months. During this period, a medical professional will help you safely detox and reintegrated into the society to live a healthy and purposeful life.

Steps on How to Overcome Oxycodone Addiction

If you are addicted to Percocet or any other opioid seek help immediately.

Can You Snort Subutex?
can you snort oxycodone?
July 30, 2018 Family & Community HealthDr OtorkpaLeave a comment