Can You Drink Rubbing Alcohol? 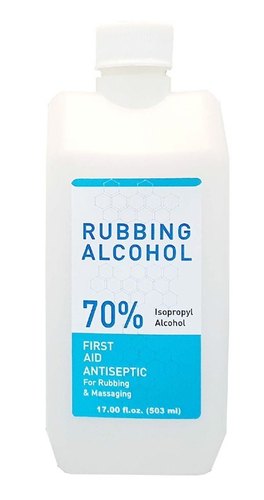 What is rubbing alcohol?

Rubbing alcohol is a natural bactericidal treatment. This means it kills bacteria but doesn’t necessarily prevent their growth. Rubbing alcohol can also kill fungus and viruses. However, it’s important a person uses a rubbing alcohol concentration of no less than a 50 percent solution. The United States Pharmacopeia (USP) defines “isopropyl rubbing alcohol USP” as containing approximately 70 percent alcohol by volume of pure isopropyl alcohol and defines “rubbing alcohol USP” as containing approximately 70 percent by volume of denatured alcohol. In Ireland and the UK, the comparable preparation is surgical spirit B.P., which the British Pharmacopoeia defines as 95% methylated spirit, 2.5% castor oil, 2% diethyl phthalate, and 0.5% methyl salicylate.

There’s a good reason rubbing alcohol is a part of most people’s first-aid kits. You can use it for the following medical purposes:

Can you die from drinking rubbing alcohol?

A 16-month-old child got into a bottle of rubbing alcohol. He drank an unknown amount of the liquid and spilled it all over his face and into his eyes. When Poison Control was called, the child was drowsy and stumbling. His eyes were very red and irritated; he was rubbing them vigorously and screaming. The ambulance was called and the child was taken to the emergency room. In the emergency room, he vomited and remained sleepy. After putting special lenses in the child’s eyes, the physician irrigated them with normal saline solution. During this uncomfortable procedure, the child became very agitated and irritable. Over the next 2 hours, he became alert and was discharged home. By the following day, the child’s eyes were back to normal. He didn’t require any other treatment.

However, others ere not so lucky , seven people in the Far East Russian republic of Sakha died from drinking unwholesome alcohol in hand sanitizer at a party, authorities and news reports have said. Nine people consumed the hand rub from a five-liter container that they purchased from a local store, the regional branch of consumer safety watchdog. According to the Moscow Times the sanitizer contained 69% methanol, a non-drinking alcohol that is deadly to humans in doses of 30 grams or more, it added.

Can you dilute rubbing alcohol with water to drink?

Rubbing alcohol is either isopropyl alcohol or ethanol-based liquids, or the comparable British Pharmacopoeia (BP) defined surgical spirit, with isopropyl alcohol products being the most widely available. Rubbing alcohol is denatured and undrinkable even if it is ethanol-based, due to the bitterants added. Adding water to it does not make it healthy to consume. Anecdotal evidence from reddit suggest that many people are diluting rubbing alcohol with water to drink, this practice puts your health at great risk as you may never find out what happens if you drink rubbing alcohol because you may lose your life in the process.

Denatured alcohol is ethanol (ethyl alcohol) made unfit for human consumption by adding one or more chemicals (denaturants) to it. Denaturing refers to removing a property from the alcohol (being able to drink it), not to chemically altering or decomposing it, so denatured alcohol contains ordinary ethyl alcohol.

READ: How to Clean Your System Out From Drugs and Alcohol