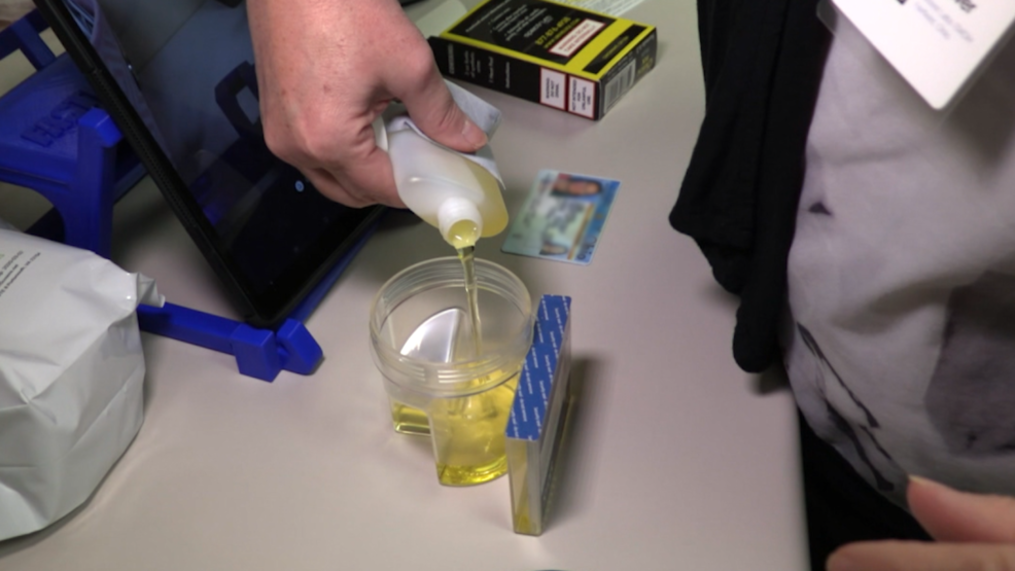 At least eighteen states, including Indiana and Kentucky, have laws that criminalize the sale or use of synthetic urine. Nevertheless, people with a lot at stake will give anything a go when they’re thinking “how to pass a drugs test” – bleaching, shaving, pills, and purgatives have all been tried. One of the more daring options – switching the samples altogether – takes on a new dimension in the world of urine testing.

It’s not easy to fake a urine sample, but it’s been done. Former heavyweight champion Mike Tyson admits to using a prosthetic penis filled with uncontaminated urine to pass doping tests at the height of his career. And false member technology has continued to advance. It now includes heat packs and switch releases for faster delivery, and the loophole that Tyson always feared – being caught using a woman’s urine – has, in theory, been closed. According to the Department of Justice, up to 10% of urine samples collected in the military yield false-negative results, and guaranteed drug-free urine can be purchased from a number of commercial sources.

A wee history of synthetic urine

Synthetic urine has been around for a while – the first sample of artificial urea, the key chemical making up urine, was created in 1828 by Friedrich Wöhler. At the time, this was a scientific curiosity, one of the first organic compounds produced in laboratory conditions. Now, Wöhler synthesis is sometimes recognized as the beginning of organic chemistry as a viable field.

Workplace drug testing has become more and more commonplace, particularly in the US, where the War On Drugs initiative of the late 1980s saw more and more workplaces introduce zero-tolerance drug policies. In the UK, these policies have been slower to catch on, but TUC reports that safety critical industries like construction, transport, and power have adopted a similar approach. In those circumstances, employees are becoming cagier and cagier and looking for ways to ensure negative test results.

How common is synthetic urine?

There’s a thriving market for both synthetic pee and prosthetics to deliver it: Ultra Klean synthetic urine is available on eBay, for instance, while distributors Urine Luck have been specializing in synthetic urine as a “detox product” since 2004. It’s easy for companies to claim that’s not what their product is for. One company actually has a list of uses for synthetic urine on its website, claiming it’s used “to calibrate your urine testing equipment, getting down and dirty with some wet-sex simulation, or just pranking your friends”

Ultimately, it’s the same principle as head shops selling amyl nitrites as “room deodorizers” (and head shops are another easy way to lay your hands on some prosthetic pee). Everyone involved knows they’re for recreational consumption, but the letter of the law can’t prove that in court – after all, that’s not what it says on the packaging, and the company can’t be held accountable for misuse by consumers.

What’s synthetic urine made of?

As we’ve said, artificial urea is nothing new, but it’s a leap from this compound to synthetic urine that can fool a drug test.

Add water, creatinine, pH balancers, and uric acid to this compound and you have the chemical balance right. But there’s more to the tests than this. Urinalysis clinics use gas chromatography to separate and identify the compounds in a sample, along with mass spectrometry to measure a sample’s density. Synthetic urine needs to be carefully blended so it has a comparable mass and composition to the real stuff – and crucially, it needs to be delivered at body heat.

Why’s that crucial? Because the sample needs to be heated to a specific, narrow temperature at the point of collection. It’s fiddly, it demands paraphernalia and waiting times, and it leads to detectable oddities in behaviour, for which the sample collector should be on the watch.

How synthetic urine is tested

Synthetic urine is, chemically speaking, quite sophisticated – and therefore not easy to detect through analysis. This means the point of collection is the best time to detect synthetic urine. Collectors will need to show the same diligence, the same duty of care, that they do for hair testing. They’ll need to balance a reasonable concern for the subject’s privacy with a certain skepticism about “pee shyness” to ensure no prosthetics are being whipped out in the lab.

Once the sample is verified and in hand, a rigorous chain of custody prevents the riskier approach of physically swapping the samples over. The sample should always be held by a named person, that person should always be accountable for what happens to it, and the sample should never be handed to an untrained or unaccountable third party. At the end of the day, detecting synthetic urine is a job for the professionals – qualified and experienced toxicologists working with an accredited lab, one that’s proven it screens and handles its samples properly

How the legality, or lack thereof, informs the marketing of fake pee

Just like the legality of weed, the legality of fake urine varies from state to state. Eighteen states have outlawed the manufacturing, delivery, use, or sale of synthetic urine to falsify drug tests, but of those, only one state, South Carolina, has ever prosecuted a urine seller, and only twice. In each of those cases, the seller was accused of marketing fake urine for the explicit purpose of passing a drug test. Illinois and Kentucky have made the sale of urine punishable as a felony, and North Carolina and South Carolina have made it punishable as a felony on a second offense. In all other states, the sale or use of fake urine is a misdemeanor.

Companies that manufacture and sell urine are able to operate as legal businesses by claiming that their product isn’t meant to be used to falsify drug tests. A similar tactic is used with some other drugs and drug paraphernalia: Glass pipes are often sold “for tobacco consumption” but largely used with marijuana; alkyl nitrites, also known as poppers, are sold as room deodorizers but typically used as a recreational inhalant. SEE: How To Make Yourself Pee For A Drug Test