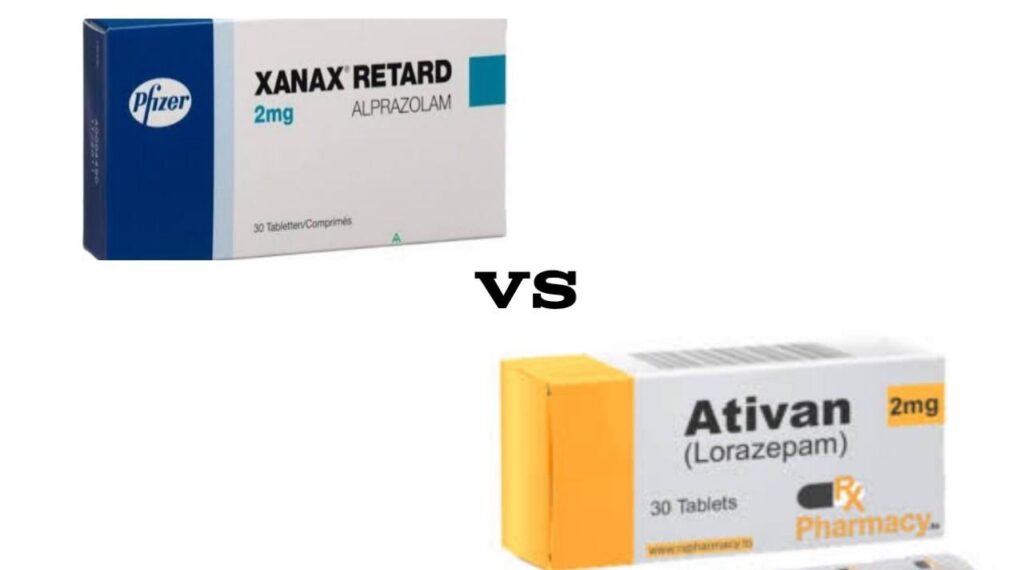 Ativan is the brand name for lorazepam a benzodiazepine medication. It is used to treat anxiety disorders, trouble sleeping, active seizures including status epilepticus, alcohol withdrawal, and chemotherapy-induced nausea and vomiting. SEE: How Long Does Ativan [Lorazepam] Stay In Breastmilk

Alprazolam, sold under the brand name Xanax, among others, is a short-acting tranquilizer of the triazolobenzodiazepine class, which are benzodiazepines fused with a triazole ring. It is most commonly used in the short-term management of anxiety disorders, specifically panic disorder or generalized anxiety disorder. SEE: How to Spot Fake B707 Xanax Bar

Although both drugs belong to the class of drugs known as benzodiazepines, so have a similar mechanism of action, there are structural differences between them that affect their activity in the body.

Which one works quicker?

Xanax is usually more quickly absorbed than Ativan with peak concentrations occurring within 1-2 hours following administration, compared to 2 hours for Ativan. Effects of Xanax last on average 4 to 6 hours although there are wide variations between individuals (see below). Effects of Ativan last approximately 8 hours, although may persist for longer in some people.

How much Xanax equals 1mg of Ativan?

Benzodiazepine equivalency tables state that 0.5mg of alprazolam (Xanax) is approximately equivalent to 1mg lorazepam (Ativan). However, people of Asian descent metabolize Xanax differently to people of other races, and certain disease states such as alcoholism, liver and kidney disease, obesity, and even old age can affect how Xanax behaves in the body; so benzodiazepine equivalency tables should be used as a guide only as they do not reflect individual variation. Both Ativan and Xanax should only be used short-term.

How do Ativan and Xanax work?

Both Ativan and Xanax, like all benzodiazepines, enhance the actions of a neurotransmitter in the brain called GABA (gamma-aminobutyric acid). This neurotransmitter can reduce the activity of nerve cells, so enhancing it has a calming effect that can improve symptoms of anxiety, reduce muscle tension, stop seizures, and induce sleep. Benzodiazepines are also known for their amnesic effect – or ability to disrupt short-term memory – and this makes them useful before surgery. Because of structural differences, some benzodiazepines are more likely than others to make you sleepy, relieve anxiety, stop seizures, relax muscles, or make you forget. Ativan and Xanax are both FDA-approved for anxiety relief and are less likely than some other benzodiazepines (such as diazepam or temazepam) to induce sleep. The sedative effects of lorazepam that did occur were of slower onset but lasted longer than alprazolam in one trial. Lorazepam may also be used in the treatment of seizures.

Which drug is more effective or works better for anxiety?

Both Xanax (alprazolam) and Ativan (lorazepam) can work well for emotional and physical symptoms of a generalized anxiety disorder (GAD). Numerous research studies have found that both are also effective for panic disorder. Xanax and Ativan initiate anti-anxiety effects very quickly, within the first week of treatment. Compare that to other anxiety medications like Zoloft (sertraline) and Prozac (fluoxetine), which take a few weeks to work. That’s why Xanax and Ativan are so popular for acute anxiety symptoms, especially for people with severe symptoms who need rapid relief.

For this same reason, Xanax and Ativan might be prescribed when you first start taking an antidepressant-like Zoloft and Prozac. These antidepressants are useful if you suffer from both depression and anxiety at the same time, but they take time to kick in. So Xanax or Ativan can be prescribed to help until the antidepressant starts working.

Which drug is more addictive?

Both Ativan and Xanax should only be used short-term due to the risk of addiction and dependence. Generally speaking, benzodiazepines with a shorter half-life (such as Ativan and Xanax) are harder to stop than those with a longer half-life (such as diazepam). Both Ativan and Xanax readily enter brain tissue which reinforces drug-taking and is generally associated with more severe withdrawal symptoms. Therefore, Ativan and Xanax are both at high risk of abuse. Research directly comparing Ativan with Xanax is not available; however, many experts have particularly advised that Xanax be used with caution as it has been associated with particularly severe withdrawal symptoms.

Ativan (lorazepam) and Xanax (alprazolam) are both used to treat anxiety and other psychiatric disorders. They are in the benzodiazepine family of drugs, which help inhibit excess nerve stimulation in the brain. Researchers believe excess neural firing in the brain causes anxiety.

Both drugs also have the potential for addiction. Stopping either Ativan or Xanax abruptly can cause dangerous withdrawal symptoms, depending on how long a person has been taking the drug.

The central difference between Ativan and Xanax is Ativan leaves a person’s system more quickly, reducing the chance of toxicity or side effects. Some side effects of both these drugs include sedation, dizziness, weakness, unsteadiness, and memory problems.

Ativan also has fewer unfavorable interactions with other medications when compared to Xanax. Each medication, however, can cause dangerous increased sedation when consumed with alcohol, other depressants, or other anti-anxiety medications. SEE: 10 Differences and Similarities Between Zoloft vs Xanax

Etizolam vs Xanax: 7 Similarities and Differences