Etizolam vs Xanax: 7 Similarities and Differences 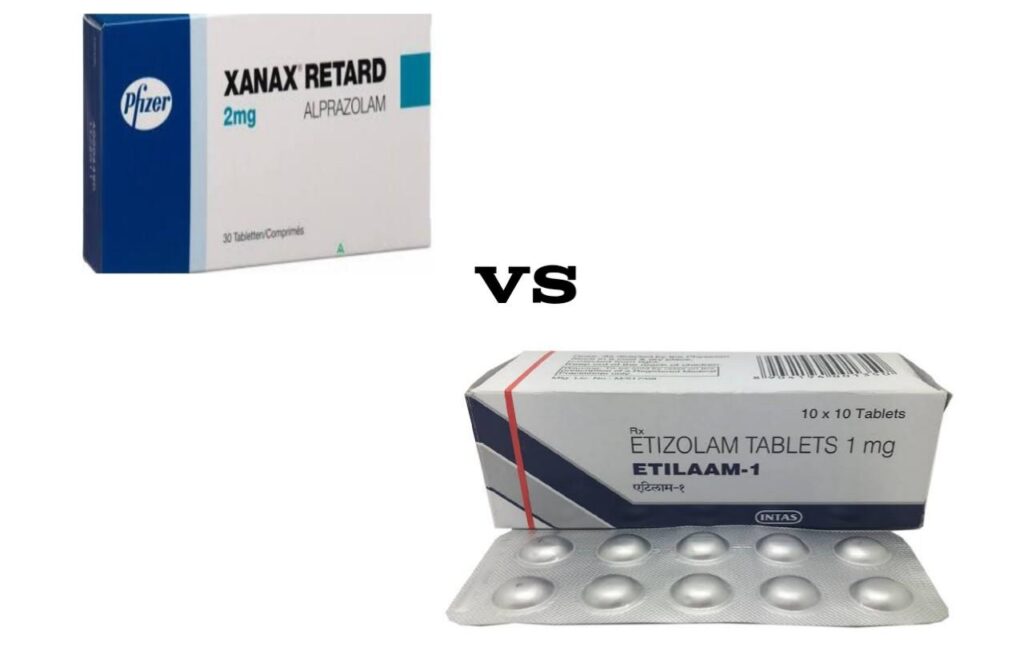 Xanax (alprazolam) is a benzodiazepine. It is thought that alprazolam works by enhancing the activity of certain neurotransmitters in the brain. Xanax is a prescription medicine used to treat anxiety disorders and anxiety caused by depression. Xanax is also used to treat panic disorders with or without a fear of places and situations that might cause panic, helplessness, or embarrassment (agoraphobia). SEE: Ativan vs Xanax: 5 Differences and Similarities

The effects and chemical structures of Etizolam and Xanax are very similar, but there are some differences. They are both central nervous system (CNS) depressants that are used to treat anxiety and panic disorders. They also have sedative qualities and can be used as sleep aids, but they may cause daytime drowsiness. They can also cause intoxication that’s similar to alcohol, including loss of motor control, memory loss, the release of inhibitions, slurred speech, and respiratory depression.

But with so many similarities, how do they differ? Here are some of the most significant differences between etizolam and Xanax:

The two drugs work in the brain in very similar ways, but they’re actually in different chemical classes. Xanax is a benzodiazepine, which has a chemical structure that involves a benzene ring touching a diazepine ring. Other drugs in this class are Valium and Ativan.

Etizolam also has benzene and diazepine rings, but they aren’t touching. Where the benzene ring resides in a benzodiazepine, there’s another structure called a thiophene ring. This difference puts etizolam in a category called thienotriazolodiazepine.

In the United States, Xanax is classified as a Schedule IV substance by the federal government. In other words, it has a low potential for abuse, and it’s currently accepted for medical use in the United States. It’s also considered to have a low risk of physical and psychological dependence if it’s abused. However, benzodiazepines do have a significant risk of physical dependence and abuse. Still, it’s considered to be limited compared to more addictive drugs that are more strictly scheduled. It can be obtained with a prescription, but otherwise, it’s illegal to buy and sell it without authorization.

Summary of Similarities Between Xanax And Etizolam

Xanax and Etizolam can be used to stop sleeping troubles. After all, they depress or slow down the central nervous system effectively. Hence, the medicines make you feel relaxed and sleepy. However, they also share some bad side effects, such as:

Unfortunately, dependence on Xanax or Etizolam can develop fast too. Given that, they’re only suitable for short-term treatment for up to four weeks. Yet, people often lose control of their dosing as tolerance grows. To clarify, more of the drugs is craved to feel the same calming effects. Ultimately, you could do serious heart and liver damage or overdose. So, finding a Xanax or Etizolam addiction treatment program is vital.

Summary  of Differences Between Etizolam Vs Xanax

In spite of similarities, Etizolam and Xanax are different drug types. To explain, Xanax is classified as a benzodiazepine like Valium. Conversely, Etizolam has a slightly different chemical makeup as a thienodiazepine. Ergo, Etizolam has added properties that prevent seizures. Currently, Etizolam is illegal in the United States and not approved by the FDA. Whereas, doctors popularly prescribe Xanax as a Schedule IV drug.

Moreover, Etizolam is up to 10 times stronger than Xanax. Comparatively, Etizolam is only available in 0.25 to 1-milligram doses, while Xanax goes up to 3 milligrams. Frequently, patients taking Xanax can choose an extended-release form. Thus, the medicine lasts around 12 hours, instead of the 5-7 hours for Etizolam. Plus, the availability of Etizolam vs Xanax differs with the former not sold at pharmacies. SEE: 10 Differences and Similarities Between Zoloft vs Xanax