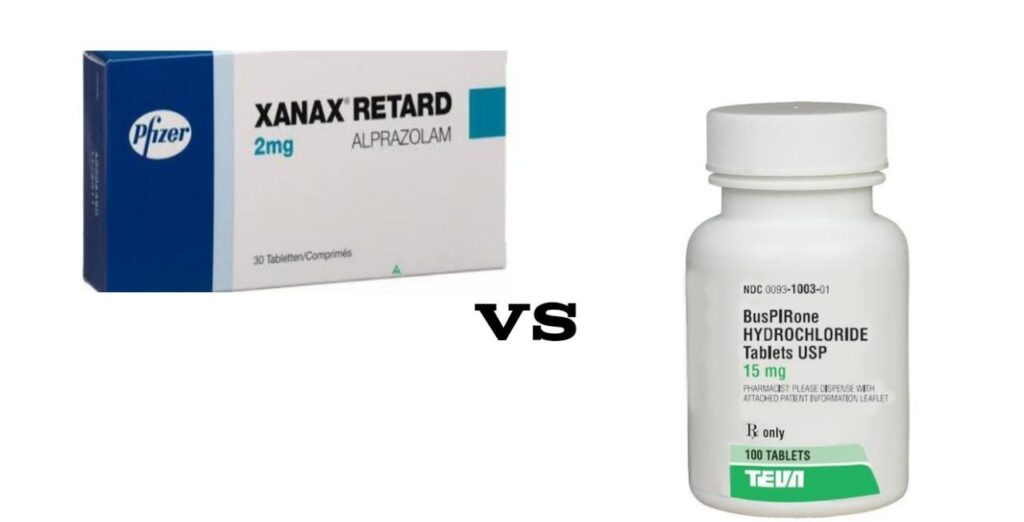 Buspirone, sold under the brand name Buspar among others, is a medication primarily used to treat symptoms of anxiety, such as fear, tension, irritability, dizziness, pounding heartbeat, and other physical symptoms.. Benefits support its short term use. However, it has not been found to be effective in treating psychosis. SEE: Blue Pill C1: Everything you Should Know

Xanax (alprazolam) is a benzodiazepine. It is thought that alprazolam works by enhancing the activity of certain neurotransmitters in the brain. Xanax is a prescription medicine used to treat anxiety disorders and anxiety caused by depression. Xanax is also used to treat panic disorders with or without a fear of places and situations that might cause panic, helplessness, or embarrassment (agoraphobia). SEE: B706 Blue Pill: Everything You Should Know

Buspirone vs. Xanax differences between side effects and uses

What are the side effects of buspirone and Xanax?

The most common side effects associated with buspirone are:

Other important but less frequent side effects include

The most common side effects of Xanax taken at lower doses are:

Other side effects include:

Addiction is more likely to occur at high doses given over prolonged periods of time. Abrupt discontinuation of alprazolam after prolonged use can lead to symptoms of withdrawal such as:

Seizures can occur in more severe cases of withdrawal. Consequently, patients on alprazolam for extended periods of time should slowly taper the medication under a doctor’s supervision rather than abruptly stopping the medication.

Is buspirone or Xanax more effective?

In a study comparing buspirone and Xanax, both drugs were found to be equally effective in treating symptoms of anxiety, and buspirone was found to have less side effects and fewer withdrawal symptoms than Xanax.

Another study looked at buspirone and Xanax, as well as Valium (diazepam), and the effect on daytime sleepiness. The study found buspirone to cause the least drowsiness of the three drugs. By day 7, the differences between the drugs in terms of daytime sleepiness was not significant, but the patients who took alprazolam or diazepam had slower reaction times on a visual reaction timed-performance test. The authors concluded that although the drugs are similarly effective, buspirone may be better in patients where daytime alertness is critical. The most effective medication for you should only be determined by your doctor, who can look at your medical condition(s) and history, as well as other medications you take.

Coverage and cost comparison of buspirone vs. Xanax

Buspirone and Xanax are usually covered by insurance as well as Medicare Part D, although copays will vary. The brand-name Xanax is much more expensive and may not be covered, or if it is covered, you may have a much higher copay. Buspirone typically retails around $90 but you can get it for around $4 by using a coupon at participating pharmacies. Generic Xanax prices range from $30 to over $60 but you can get a prescription of 1 mg, 60 tablets for $10-$20 with a  coupon. SEE: Etizolam vs Xanax: 7 Similarities and Differences