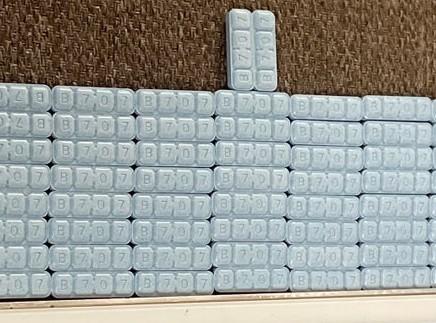 B707 is a blue rectangular pill containing 2 mg of a powerful benzodiazepine known as Alprazolam (Xanax). It is supplied by Breckenridge Pharmaceutical Inc, B707 pill is often prescribed to treat generalized anxiety disorder (GAD), panic disorders, and insomnia. B707 works by increasing the effects of a brain chemical called gamma-aminobutyric acid (GABA), which promotes calmness and produces a relaxed feeling. The drug decreases the level of excitement in the brain to treat anxiety and panic disorders. In comparison with other benzodiazepines, the body absorbs B707 pill quickly, so its effects come on rapidly. Within about 1–2 hours, the concentration of B707 pill in the blood reaches its peak.

The effects of the B707 blue pill usually appear within 1 hour, with one small scale study finding an average onset time of 49 minutes with oral administration. B707 pill also leaves the body quickly. Its half-life is 11.2 hours in healthy adults, meaning that the body removes about half of the B707 pill that it has absorbed in just over 11 hours.

However, tolerance to B707 pill develops quickly, requiring the user to take more of the drug to achieve the desired effects. Someone with a Xanax addiction may take up to 20 to 30 pills per day. If the user decides to stop taking Xanax, they may experience withdrawal effects, such as anxiety, restlessness, insomnia, and tremors. The onset of withdrawal symptoms is a sign that a physical dependence has developed. The development of tolerance and withdrawal are indications of addiction.

Some people who are dependent on B707 Xanax never abused drugs before. They were suffering from anxiety and looking to the medical field for support and relief. They started using B707 Xanax and felt a vast improvement in symptoms. Some then assumed more of the drug would produce an even greater effect, so they misused it in larger doses. Others just use it for too long, and often with a doctor’s permission. They don’t realize they’re addicted to it until it’s too late.

Some people may try to decrease their dose and then experience withdrawal symptoms that mirror their initial anxiety. They assume they cannot cope without the drug and keep using or abusing it. Sometimes the anxiety symptoms that resurface are caused by substance-induced symptoms that would otherwise dissipate if the drug abuse stopped.

Abusers of this drug aren’t limited to those with a prescription in hand. Many are young people who get the drug from friends. College students are especially at risk for dependency since their rate of abuse of these drugs has peaked in recent years. SAMHSA notes those rates are higher among individuals with mental illness, too, touting 31.6 percent of college students who abused prescription drugs in 2010 had a mental health disorder, compared to 15 percent of those who did not have a mental health disorder.

Addiction is present in teens as well, with two-thirds who abuse prescription drugs noting that it’s easy to get their hands on prescription drugs – either from family members or from friends at school. This presents a concern for the long-term health of future generations who may be damaging their brains and bodies from a very young age.

Why People Abuse B707 Blue Pill

The B707 blue Xanax is popular among people who don’t have a legitimate need for it, or take larger doses or more frequently than prescribed. In these cases, B707 blue Xanax is popular because it can create a euphoric feeling, especially at higher doses. Xanax tends to start acting quickly after a person takes it, and the euphoric effects of the drug will usually manifest themselves within about an hour after taking it.

A tendency has grown in some social circles to view benzos, like Xanax, as a type of “alcohol” in pill form. It’s become socially acceptable among these groups of friends to get together and share Xanax with one another. Of the 30.5 million people who used benzos in 2015, 17.1% misused them. Misusing Xanax or combining it with other substances like alcohol can amplify its effects, but the results can also be deadly.

Taking more than the prescribed dosage or using B707 Xanax without a prescription is considered abuse of the drug. However, those who follow a prescription can still become addicted to B707 Xanax.

An overdose on Xanax can be fatal, especially if the drug is taken with alcohol or other drugs. Overdose can also occur if the pills are crushed or chewed, as the drug is designed to be time-released into the system. Xanax overdose symptoms include:

Treatment for a B707 Xanax overdose will depend on how much of the drug was taken and whether other drugs or alcohol were also taken. In the event of an overdose, medical providers may pump the stomach to remove as much of the unabsorbed Xanax as possible. Medications, such as flumazenil, may also be administered as an antidote. Doctors may insert an IV to provide necessary fluids. It is important for anyone suffering from an overdose to be honest with the emergency medical personnel about exactly what substances were taken and how much.

Recently, many drug dealers now mix the cheaper fentanyl with other drugs like Xanax to increase their profits, making it often difficult to know which drug is causing the overdose. Fentanyl is a powerful synthetic opioid that is similar to morphine but is 50 to 100 times more potent. Fentanyl-laced pills are responsible for most overdose deaths involving drugs that trigger highs. SEE: How to Know Real Blue Pill B707 Xanax

How Long Does Blue B707 Pill Last?

R039 Pill Vs B707 Pill: Differences and Similarities
B707 Blue Pill
May 6, 2021 Family & Community HealthPublic HealthComments Off on The Effects of B707 Blue Pill High On your Body