Acetaminophen vs. Paracetamol: Is There Any Difference? 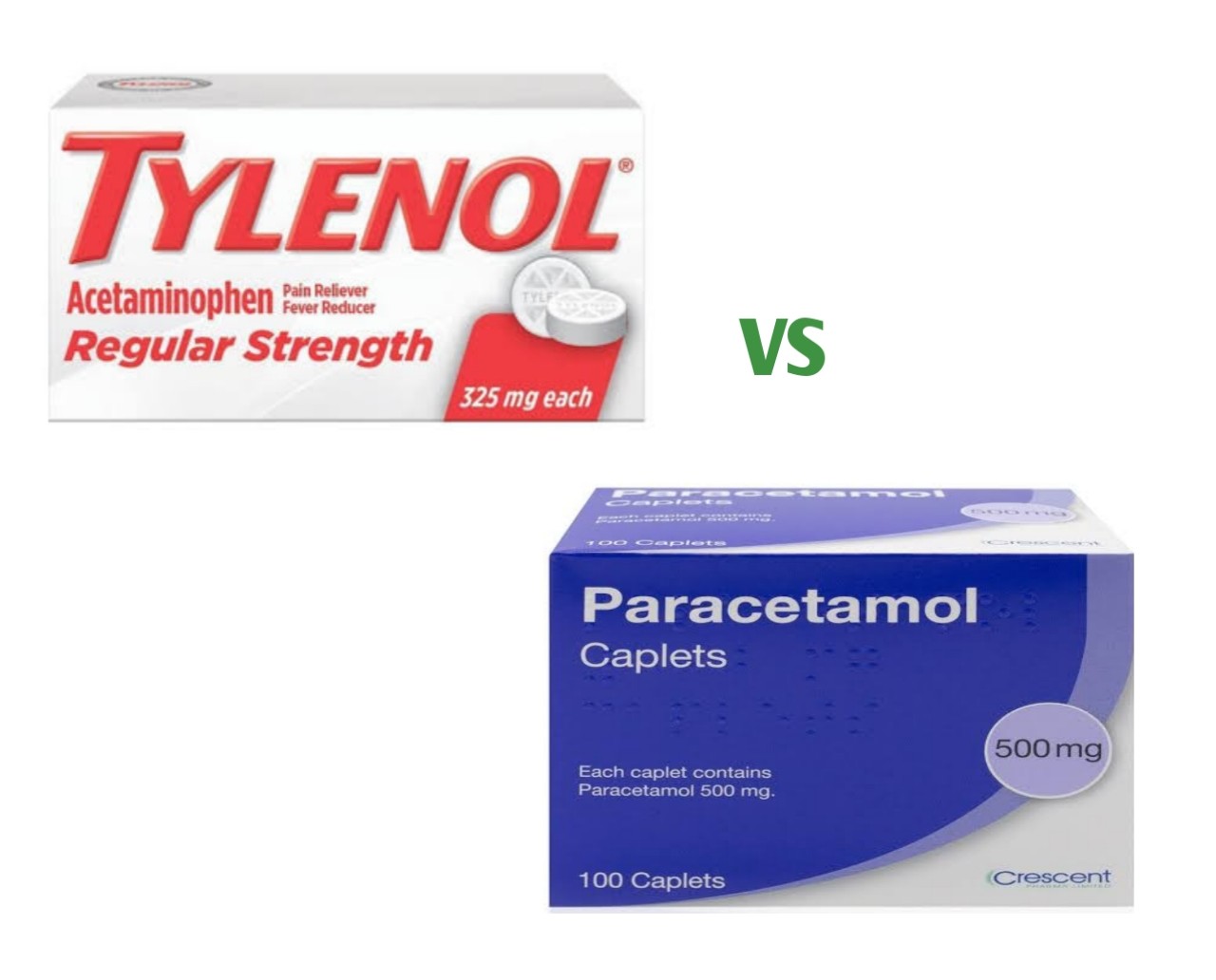 Acetaminophen the active ingredient in Tylenol is one of the most famous drugs in the U.S. It’s used to help relieve mild to moderate pain, fever, and headache. The chemical compound para-acetylaminophenol is known by many other names such paracetamol.

Acetaminophen and paracetamol are two of the generic names for this compound. Other names used for acetaminophen include APAP N-acetyl-p-aminophenol p-acetylaminophenol and of course Tylenol.

Regardless, all the names are referring to the same chemical substance and chemical name drug, which can be written as para-acetylaminophenol.

Other trade names around the world for products containing acetaminophen include:

Acetaminophen and paracetamol are used to treat acute tension-headaches and mild to moderate migraine, especially in combination with caffeine and aspirin. Acetaminophen or paracetamol is indicated in chronic pain associated with rheumatoid arthritis, back or hip pain, osteoarthritis, dental pain, or acute pain due to soft-tissue injury. They are suitable substitutes for aspirin for its analgesic or antipyretic uses in cases where aspirin is contraindicated (gastric bleeding) or when the prolongation of bleeding time caused by aspirin would be a disadvantage.

Acetaminophen vs. Paracetamol: Do they have the same dosage?

The dose of either medication depends on the brand in your possession. According to the NHS, paracetamol can be taken with or without food. The usual dose for adults is one or two 500mg tablets up to 4 times in 24 hours.

Always leave at least 4 hours between doses. Overdosing on paracetamol can cause serious side effects. Do not be tempted to increase the dose or to take a double dose if your pain is very bad.

Adults can take a maximum of 4 doses (up to eight 500mg tablets in total) in 24 hours. Wait at least 4 hours between doses.

Acetaminophen (Tylenol) is available in children’s strength, regular strength, extra strength, and extended-release strength. It’s also available as a tablet, capsule, liquid, powder, and suppository. Follow your provider’s instructions or the directions on the medication label. The following information includes only the average doses of this medication.

Adults: The typical dose is 650 mg either by mouth or inserted into the rectum every 4 to 6 hours as needed. The maximum daily dose will differ slightly depending on what formulation (e.g., regular strength, extra strength, extended-release, etc.) you’re taking, but generally, you should not take more than 3,000 mg to 4,000 mg per day. Check with your provider about what your maximum dose of acetaminophen (Tylenol) should be.

Children: The dose is typically based on the child’s age and weight. In most cases, children age 12 or older can use the adult dose, but it’s always best to follow the provider’s instructions or the directions on the medication label.

Are the side effects of acetaminophen and paracetamol the same?

Yes, since they contain the same active ingredient they also produce the same side effects. Most people tolerate this drug well. In rare cases, people have had allergic reactions to it. The most concerning side effect, though, is severe liver damage. It usually only happens when you overuse acetaminophen.

Symptoms of liver damage include:

If you suspect you’ve taken too much paracetamol or acetaminophen and notice any of these symptoms, contact your poison control center or get medical help right away. If you know you’ve taken more than the recommended dosage of acetaminophen, go to the nearest emergency room, even if you don’t have any symptoms of liver damage. If someone you know who has taken acetaminophen becomes unresponsive or stops breathing, call 9-1-1 or the number for your local emergency services.

Acetaminophen vs. Paracetamol: Which damages the liver more?

According to the U.S. Food and Drug Administration (FDA), taking too much acetaminophen or paracetamol can cause the same dose-dependent damage to your liver. The recommended maximum daily dose of both drugs is 4,000 milligrams (mg) per day for adults. However, the difference between a safe dose of acetaminophen and one that may harm the liver is very small. McNeil Consumer Healthcare (the maker of Tylenol) lowered its recommended maximum daily dose to 3,000 mg. Many pharmacists and healthcare providers agree with this recommendation.

Symptoms of an overdose can include:

Also seek emergency care if you notice any symptoms of an overdose, such as loss of appetite, nausea and vomiting, or pain in the upper right side of the abdomen.

Causes of acetaminophen or paracetamol overdose

The overwhelming majority of the time, acetaminophen or paracetamol is taken safely and according to the directions. Some common reasons that people may accidentally take more than the recommended daily dose of acetaminophen include:

You should talk to a healthcare provider before taking acetaminophen or paracetamol if you have three or more alcoholic drinks every day. Together, acetaminophen and alcohol increase the chance of overdose and liver damage.

Children may also unintentionally take more acetaminophen or paracetamol than recommended by taking too much at once or taking more than one product with acetaminophen.

What Are The Differences Between Panadol And Panadol Extra?

44 104 Pill: Uses, How It Works Dosage, Side Effects
acetaminophen vs paracetamol
July 8, 2022 Family & Community HealthPublic HealthComments Off on Acetaminophen vs. Paracetamol: Is There Any Difference?