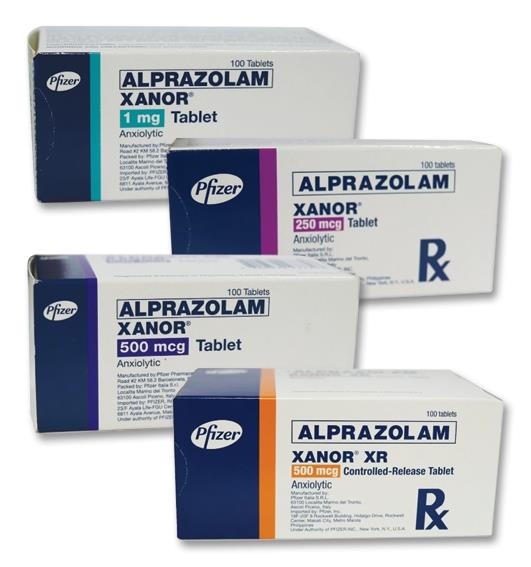 Xanor is a brand of Alprazolam produced by Pfizer, it is common in countries like Finland, Norway, the Philippines, South Africa, and Sweden. Alprazolam belongs to a class of medications called benzodiazepines which act on the brain and nerves (central nervous system) to produce a calming effect. It works by enhancing the effects of a certain natural chemical in the body (GABA). There are several variants of these drugs the Xanor XR 500mcg controlled release tablet, Xanor 500mcg tablet, Xanor 250mcg tablet, Xanor 1mg tablet,  Xanor 2mg tablets among others. 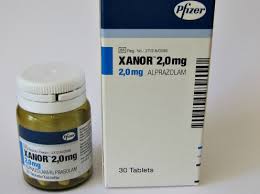 What is Xanor used for?

Xanor is a prescription medicine used to treat anxiety disorders and anxiety caused by depression. Xanor is also used to treat panic disorders with or without a fear of places and situations that might cause panic, helplessness, or embarrassment (agoraphobia).

Xanor may be habit-forming. Misuse can cause addiction, overdose, or death.

Fatal side effects can occur if you take Xanor with alcohol, opioid medicine, or other drugs that cause drowsiness or slow your breathing.

Xanor is a controlled substance because it can be abused or lead to dependence. Keep this medicine in a safe place to prevent misuse and abuse. Selling or giving away Xanor may harm others, and is against the law. Tell your healthcare provider if you have abused or been dependent on alcohol, prescription medicines, or street drugs.

You should not take Xanor if:

To make sure Xanor is safe for you, tell your doctor if you have:

Do not use Xanor if you are pregnant. This medicine can cause birth defects, and your baby could become dependent on the drug. This can cause life-threatening withdrawal symptoms in the baby after it is born. Babies born dependent on habit-forming medicine may need medical treatment for several weeks. You should not breastfeed while using Xanor.

Xanor is not approved for use by anyone younger than 18 years old.

How should I take Xanor?

Take Xanor exactly as prescribed by your doctor. Follow the directions on your prescription label and read all medication guides. Your doctor may occasionally change your dose. Never use Xanor in larger amounts, or for longer than prescribed. Tell your doctor if you feel an increased urge to use more of this medicine.

Xanor may be habit-forming. Misuse can cause addiction, overdose, or death. Keep the medication in a place where others cannot get to it. Selling or giving away this medicine is against the law.

Swallow the extended-release tablet whole and do not crush, chew, or break it.

Do not swallow the orally disintegrating tablet whole. Allow it to dissolve in your mouth without chewing.

Call your doctor if your symptoms do not improve, or if they get worse.

If you use this medicine long-term, you may need frequent medical tests.

Store at room temperature away from moisture, heat, and light. Keep track of your medicine. You should be aware if anyone is using it improperly or without a prescription.

Take the medicine as soon as you can, but skip the missed dose if it is almost time for your next dose. Do not take two doses at one time.

Seek emergency medical attention or call the Poison Help line. An overdose of alprazolam can be fatal. Overdose symptoms may include extreme drowsiness, confusion, muscle weakness, loss of balance or coordination, feeling light-headed, and fainting.

What should I avoid while taking Xanor?

Get emergency medical help if you have signs of an allergic reaction to Xanor: hives; difficulty breathing; swelling of your face, lips, tongue, or throat.

The sedative effects of Xanor may last longer in older adults. Accidental falls are common in elderly patients who take benzodiazepines. Use caution to avoid falling or accidental injury.

Common Xanor side effects may include:

This is not a complete list of side effects and others may occur. Call your doctor for medical advice about side effects.

What other drugs will affect Xanor?

Taking Xanor with other drugs that make you sleepy or slow your breathing can cause dangerous side effects or death. Ask your doctor before using opioid medication, a sleeping pill, a muscle relaxer, a prescription cough medicine, or medicine for depression or seizures.

Tell your doctor about all your other medicines, especially:

This list is not complete. Other drugs may interact with alprazolam, including prescription and over-the-counter medicines, vitamins, and herbal products. Not all possible drug interactions are listed here.

Xanor falls under the category of Central Nervous System Depressants. The drugs slow brain activity and have a sedative, tranquilizing effect on central nervous system function. Such medicines can cause drowsiness, poor concentration, slurred speech, dizziness, dry mouth, memory problems, slowed breathing, lowered blood pressure, headaches, and lightheadedness. According to the National Institute on Drug Abuse, if a person takes benzodiazepines for too long, they will require larger and larger doses of the drug to experience the same effects from it. Continued use can lead to dependence on the medications and withdrawal symptoms if one stops taking it. And not only are benzodiazepines addictive, mind-altering, and habit-forming, but they can cause overdoses as well. The initial reasons why the person began taking benzodiazepines may have been legitimate, but a medically-authorized prescription for benzodiazepine drugs can turn into a harsh addiction battle within a matter of months or even just weeks. And what’s perhaps worst of all, that which began as an innocent search for a solution to one’s anxiety can end up in an overdose on benzo drugs, potentially even a fatal overdose.

When it comes to addiction, benzodiazepines do not often make headline news. That changed recently. In fact, an increase in the misuse of common benzo drugs like Xanax, Ativan, and Valium caused the Food and Drug Administration to add misuse/abuse warning labels to all newly-produced prescription bottles for the three drugs mentioned above.

According to health experts cited in U.S. News, benzodiazepine misuse is a growing problem in America and other countries, exacerbated by the fact that benzo addicts often misuse such drugs in tandem with opioids, increasing the risk of accidents, overdose, and even death. In fact, in 2017 and 2018, benzo drugs were found in one-third of all opioid-related overdoses. That information is cause for concern because, in 2019 alone, more than 92 million prescriptions were written for benzodiazepine drugs. Furthermore, tens of thousands died from opioid and benzo-related deaths, showing just how prevalent this problem is.

Remember, keep this and all other medicines out of the reach of children, never share your medicines with others, and use Xanor only for the indication prescribed.. Always consult your healthcare provider to ensure the information displayed on this page applies to your personal circumstances. SEE: How to Spot Fake Pfizer 2mg Xanax