Why Do They Check Your Elbows When Donating Plasma? 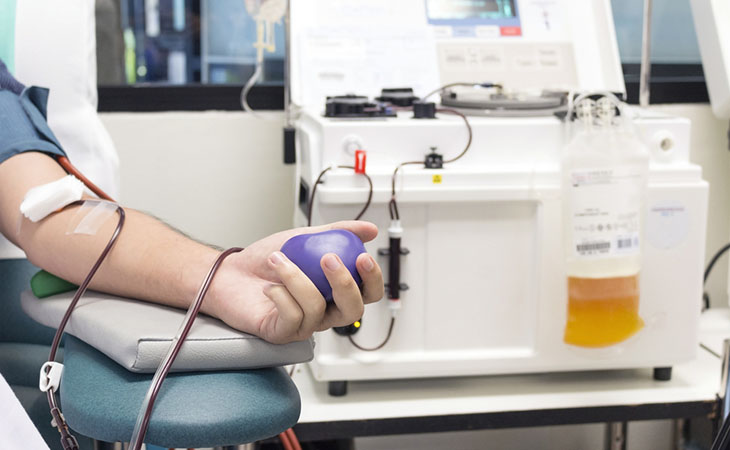 Plasma makes up about 55 percent of your blood. It carries out several key functions in the body, including transporting waste products. Plasma contains about 92 percent water. This water helps to fill up blood vessels, which keeps blood and other nutrients moving through the heart.

The remaining 8 percent of plasma contains several key materials, including:

When blood is separated into its key components, including red blood cells and plasma, plasma looks like a yellow-tinged fluid. The main role of plasma is to take nutrients, hormones, and proteins to the parts of the body that need them. Cells also put their waste products into the plasma. The plasma then helps remove this waste from the body. Blood plasma also carries all parts of the blood through your circulatory system.

Plasma donation involves drawing blood, extracting the plasma, and returning the rest of the blood to the donor through a process called plasmapheresis. This type of donation takes slightly longer than whole blood, but as a person is only donating plasma, it yields a larger volume of blood plasma, meaning people can donate more frequently.

During an AB Elite donation, you give plasma, a part of your blood used to treat patients in emergency situations. AB plasma can be given to anyone regardless of their blood type. Plasma is collected through an automated process that separates plasma from other blood components, then safely and comfortably returns your red blood cells and platelets to you. AB Elite maximizes your donation and takes just a few minutes longer than donating blood.

Generally, plasma donors must be 18 years of age and weigh at least 110 pounds (50kg). All individuals must pass two separate medical examinations, a medical history screening, and testing for transmissible viruses before their donated plasma can be used to manufacture plasma protein therapies. Plasma is collected at select donation centers.

Who it helps: AB Plasma is used in emergency and trauma situations to help stop bleeding.

The time it takes: About 1 hour and 15 minutes

Donation frequency: Every 28 days, up to 13 times/year

Why Do They Check Your Elbows When Donating Plasma?

Most of the time, blood is drawn from a vein located on the inside of the elbow or the back of the hand. Before then, a trained and qualified staff member will give you a finger-prick test that checks the levels of protein and hemoglobin in your blood. A hemoglobin test is used to find out how much hemoglobin is in your blood. It is most often used to determine if you have low levels of red blood cells, a condition known as anemia. This is done each time that you donate plasma.

As a result of the COVID-19 pandemic and potential blood shortages in the U.S., the Food and Drug Administration (FDA) has recommended changing the current guidelines. They have changed the deferral time from 12 months to 3 months for the following people: