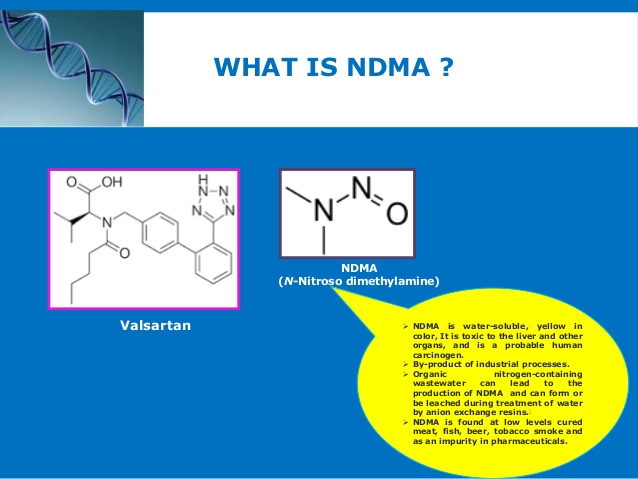 N-Nitrosodimethylamine is commonly known as NDMA. It is a yellow liquid which has no distinct odor. It is produced in the U.S. only for use as a research chemical. NDMA was used to make rocket fuel, but this use was stopped after unusually high levels of this compound were found in air, water, and soil samples collected near a rocket fuel manufacturing plant. NDMA is, however, unintentionally formed during various manufacturing processes at many industrial sites and in air, water and soil from reactions involving other chemicals called alkylamines. Alkylamines are both natural and man-made compounds which are found widely distributed throughout the environment.

NDMA does not persist in the environment.When NDMA is released into the atmosphere, it breaks down in sunlight in a matter of minutes. When released to soil surfaces, NDMA may evaporate into air, break down upon exposure to sunlight, or sink into deeper soil. NDMA should break down within a few months in deep soil. When NDMA is released into water, it may break down upon exposure to sunlight or break down by natural biological processes. The rate of breakdown in water is not known. Recently, NDMA has been implicated in the contamination of Valsartan, Zantac and Metformin.

Information suggests that the general population may be exposed to NDMA from a wide variety of sources, including environmental, consumer, and occupational sources. At this time, NDMA has been found in at least 1 out of 1177 hazardous waste sites on the National Priorities List (NPL) in the United States. Under certain conditions, NDMA may be found in outdoor air, surface waters (rivers and lakes, for example), and soil. The primary sources of human exposure to NDMA are tobacco smoke, chewing tobacco, diet [cured meats (particularly bacon), beer, fish, cheese, and other food items], toiletry and cosmetic products (for example, shampoos and cleansers), interior air of cars, and various other household goods, such as detergents and pesticides. In addition, NDMA can form in the stomach during digestion of alkylamine-containing foods. Alkylamines are naturally occurring compounds which are found in some drugs and in a variety of foods. Infants may be exposed to NDMA from the use of rubber baby bottle nipples and pacifiers which may contain very small amounts of NDMA, from ingestion of contaminated infant formulas, and from breast milk of some nursing mothers. Very low levels of NDMA have been found in some samples of human breast milk.

Occupational exposure may happen in a large number of places including industries such as tanneries, pesticide manufacturing plants, rubber and tire manufacturing plants, alkylamine manufacture/use industries, fish processing industries, foundries, and dye manufacturing plants. Researchers making or handling NDMA may also be exposed to this compound if It passes through the rubber gloves they wear during laboratory work. NDMA has been found in groundwater samples, in amounts of 10 parts NDMA per billion parts of water, at one or more hazardous waste sites on the National Priorities List (NPL). No information is available about contamination of soil, drinking water, irrigation water, sewers, storm drains, or the human food chain with NDMA near NPL sites.

How can N-Nitrosodimethylamine enter and leave my body?

NDMA can enter the body when a person breathes air that contains NDMA or when a person eats food or drinks water contaminated with NDMA. NDMA can also enter the body through the skin after contact with rubber articles that contain NDMA. Experiments in animals have shown that after being given by mouth, NDMA enters the bloodstream and goes to many organs of the body in a matter of minutes. In the liver, NDMA is broken down into other substances, most of which leave the body within 24 hours in air exhaled from the lungs and in urine, along with the NDMA that is not broken down.

Little is known about what happens to NDMA that enters the body through the skin or through contaminated air. Although vapors of NDMA are broken down within minutes after exposure to sunlight, if NDMA is spilled at a waste site and evaporates, a person nearby can be exposed to NDMA before it disappears from the air. The most important and probably the most harmful way of coming into contact with NDMA seems to be by eating contaminated food or drinking contaminated water.

How can N-Nitrosodimethylamine affect my health?

NDMA is very harmful to the liver of animals and humans. People who were intentionally poisoned on one or several occasions with unknown levels of NDMA in beverage or food died of severe liver damage accompanied by internal bleeding. Animals that ate food, drank water, or breathed air containing high levels of NDMA over a period of days or several weeks also developed serious, non-cancerous, liver disease. When rats, mice, hamsters, and other animals ate food, drank water, or breathed air containing lower levels of NDMA for periods more than several weeks, liver cancer and lung cancer as well non-cancerous liver damage occurred. The high level short term and low level long-term exposures that caused non-cancerous liver damage and/or cancer in animals also usually resulted in internal bleeding and death. Although there are no reports of NDMA causing cancer in humans, it is reasonable to expect that exposure to NDMA by eating, drinking, or breathing could cause cancer in humans. Mice that were fed NDMA during pregnancy had offspring that were born dead or died shortly after birth. However, it is not known whether NDMA could cause the death of human babies whose mothers are exposed during pregnancy. It should be realized that exposure to NDMA does not mean that any effect on health will definitely occur.

Is there a medical test to determine whether i have been exposed  NDMA?

The presence of NDMA can be detected in blood and urine by a test, but this test is not usually available and has not been used as a test for human exposure or to predict possible health effects.

What Levels Of Exposure Have Resulted In Harmful Health Effects?

The amounts of N-nitrosodimethylamine in air, drinking water, and food that cause known health effects other than cancer in humans and animals vary. These amounts are expressed as parts of NDMA per million parts of air, water, or food (ppm). The amounts of NDMA in air, water, or food that result in health effects in humans are unknown. Exposure of animals to air containing NDMA produces liver damage and death. Toxic effects of long-term exposures of animals to air containing NDMA are unknown. Short-term or long-term exposure of animals to water or food containing NDMA is also associated with serious effects, such as liver disease and death. FDA caps the acceptable daily intake limit at 96 ng. The agency set that level in 2018 when NDMA was discovered in some cardiovascular medications, determining from a variety of data sources that 96 ng/day for 70 years would result in a one in 100,000 cancer risk.

Health Department Disease Travel Advice
What is NDMA
July 30, 2020 Health FeaturesPublic HealthComments Off on What is NDMA?