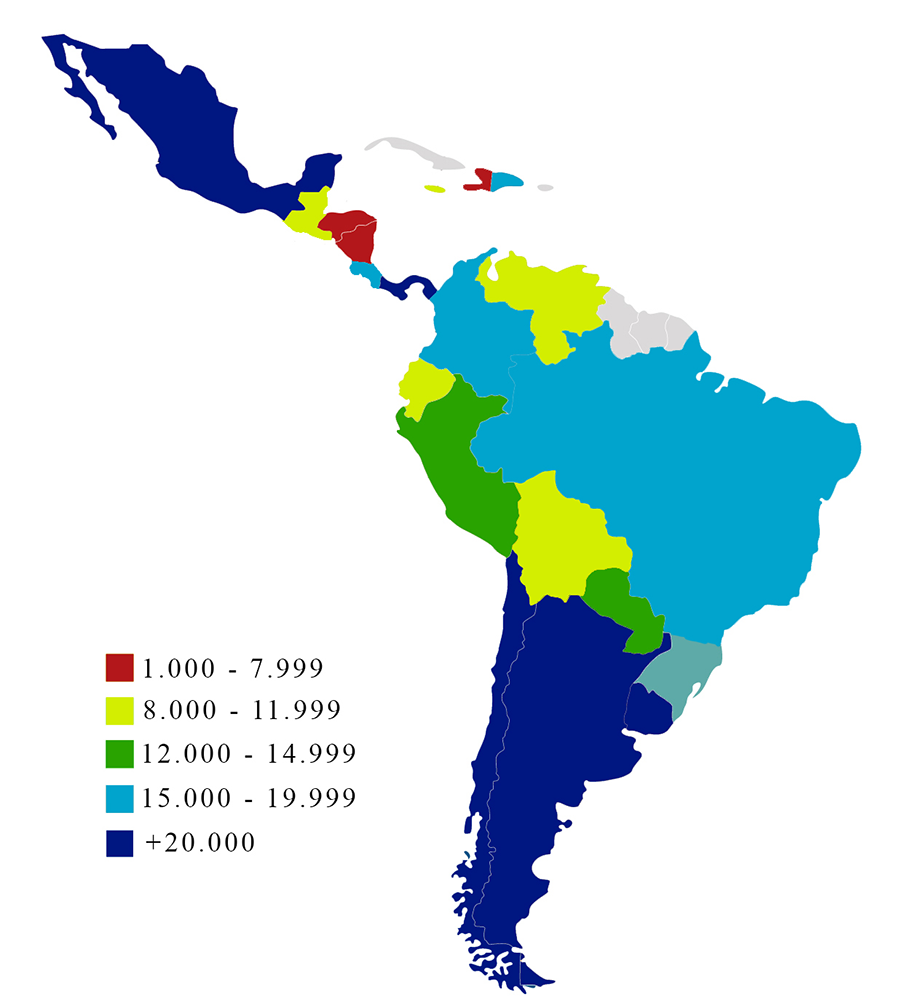 The continent of South America has experienced remarkable economic growth since the beginning of the 20th century. Most of the economies in this region are among the world’s fastest developing economies. However, despite the growth, most countries still suffer from significant unemployment and poverty rates. The weakest economies in the continent on the basis of GDP per capita are listed below:

Venezuela is the poorest country in South America, with a per capita GDP of only $3,374. Unfortunately, the country is currently amidst a major socio-economic crisis. The crisis has moved beyond unemployment and poor economic performance is now affecting the quality of life of all citizens even at a basic level. The UN estimates that 94% of Venezuelans are currently living in poverty.

Bolivia is the second poorest country in South America in terms of GDP per capita. The per capita income in the country was $3,682 in 2018 according to the records of the International Monetary Fund. The nation is located in the western-central part of the continent. Santa Cruz de la Sierra is the financial and economic hub of Bolivia. The landlocked geography of the country puts it at an economic disadvantage. The 2010 Index of Economic Freedom rated the country as a “repressed” economy. The Bolivian economy suffered a major setback in the 1980s when the price of tin fell, weakening the economy since tin mining was an important source of income in the country. Recently, however, the economy has bounced back and is experiencing a period of growth. Sound economic policies implemented by the Bolivian government have encouraged such growth.

The economy of Guyana is the third weakest on the continent. It had a GDP per capita of $4,689 in 2018. The country is located in the northern part of mainland South America but is also often listed as a Caribbean country due to its close cultural, political, and historical ties with the Caribbean region. Crop production, mining, and fishing are the main economic activities in the country. The economy of the country suffers from a shortage of skilled labor and adequate infrastructure. A significant amount of external debt, issues in the sugar and bauxite industries, and low prices of major commodities produced in the country all added to the economic slowdown of Guyana. However, since 1999, the Guyanese economy has slightly recovered and now has a better environment for business and investment.

Suriname has the fourth-smallest per capita income in South America, at $5,799. It is estimated that the poverty rate of the country nears 50%. The country, which was a former Dutch colony, relied on aid from the Netherlands until 2014. Although the country is rich in natural resources, it has not been able to fulfill its potential.

Located in the northwestern part of South America, Ecuador has the fifth-lowest GDP per capita in the continent at $6,315. The middle-income, developing economy of the country highly relies on agricultural commodities and petroleum for its survival. The GDP of the country exhibited an average annual growth of 4.3% between 2007 and 2012. Unemployment rates have also fallen significantly in the past few years. In 2001, the extreme poverty rate was at 40% but decreased to 17.4% by 2011. SEE: The Poorest Country in Central America