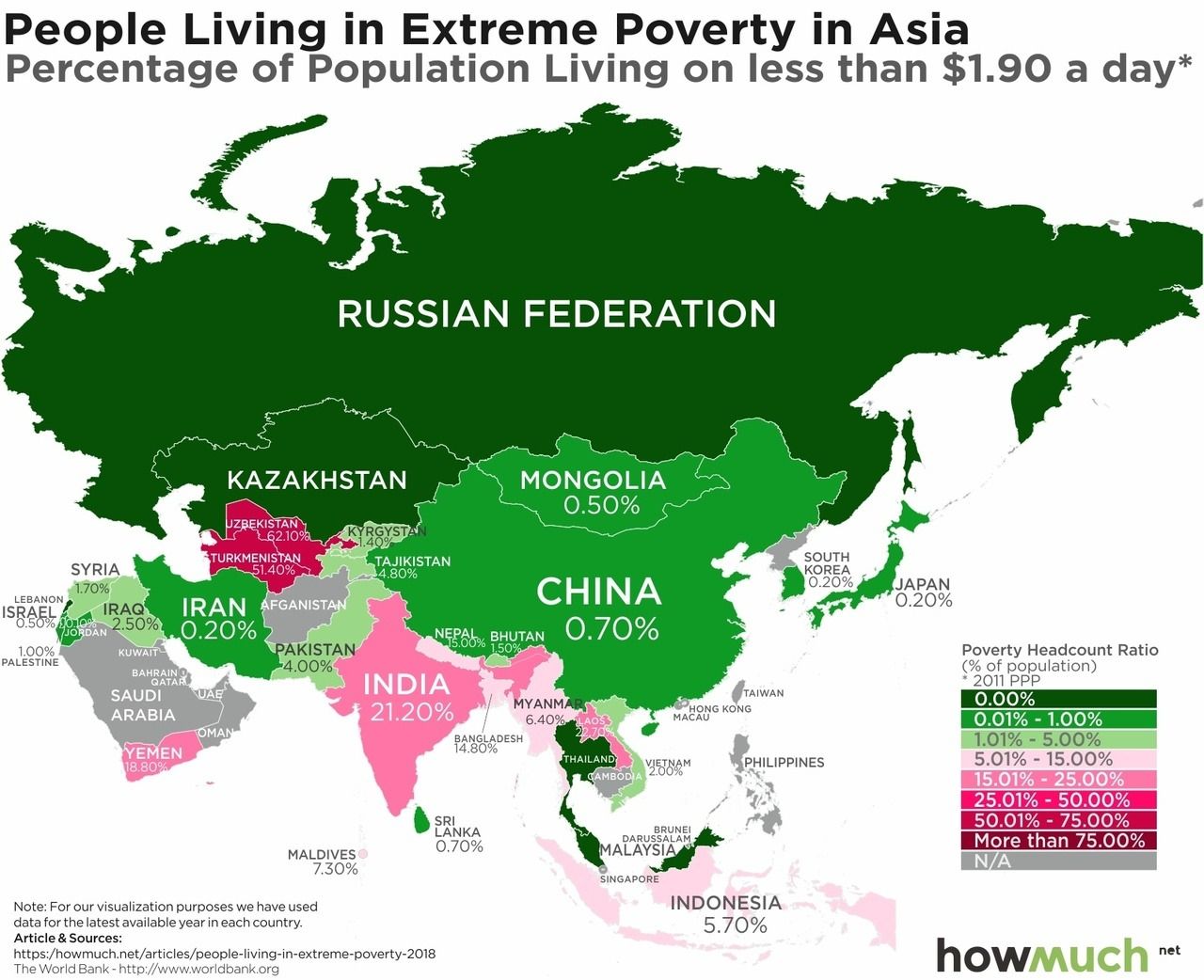 Asia is Earth’s largest and most populous continent, located primarily in the Eastern and Northern Hemispheres. It shares the continental landmass of Eurasia with the continent of Europe and the continental landmass of Afro-Eurasia with both Europe and Africa. Its 4.5 billion people (as of June 2019) constitute roughly 60% of the world’s population. In general terms, Asia is bounded on the east by the Pacific Ocean, on the south by the Indian Ocean, and on the north by the Arctic Ocean.

Asia is subdivided into 49 countries, five of them (Georgia, Azerbaijan, Russia, Kazakhstan and Turkey) are transcontinental countries and having part of their land in Europe. Asia has extremely diverse climates and geographic features.

Economic growth has been exceptionally rapid in Asia, with several countries achieving GDP growth rates of over 6% annually over the last 20 years. Growth is largely export-led, with high rates of foreign and domestic investment. It has had a dramatic effect on poverty, with 22% of a growing population still living in poverty ten years ago, down from 32% in 1990. and offers the prospect of eradicating poverty within a generation.

Despite this remarkable economic progress in recent decades, Asia is home to nearly half of the world’s poorest people, rendering poverty a key issue to be addressed. According to World Bank’s report in 2018, of the 783 million extremely poor who live below the poverty line of US$1.9 (HK$15) a day, about 33% live in South Asia and 9% live in East Asia and the Pacific.

While most of the developing world’s poor live in rural areas, the proportion of the poor living in urban areas is increasing. In Asia, the number of urban poor has risen in several countries. It is obvious that urban poverty appears to be a growing challenge Asia has to face as the economy becomes more prosperous and urbanised.

Asia is home to very powerful countries, including China, India, Japan, and South Korea. China and India have the largest populations in the world, with 1.44 billion and 1.38 billion people, respectively. China and India have the largest and second-largest economies in Asia and the second-largest and fifth-largest economies in the world.

Based on available data, North Korea is the poorest country in Asia with a per capita GDP of just $651. Poverty in North Korea is attributed to poor governance by the totalitarian regime. The free market is essentially non-existent in North Korea. As of 2020, it is estimated that about 60% of North Korea’s population lives below the poverty line.

Nepal is the second-poorest country in Asia. Nepal’s per capita GDP is $718. Nepal’s poverty is due to political instability and corruption, a lack of industry, and the country’s dependence on agriculture. Despite being rich in natural resources, Nepal has not been able to utilize and capitalize on its resources by selling it to other countries.

With a GDP per capita just above Nepal’s at $729, Tajikistan is the third-poorest country in Asia. Tajikistan’s economy is stagnated by a lack of infrastructure. Many skilled people leave the country to search for better work opportunities, leaving Tajikistan with one of the largest remittance economies in the world. Additionally, Tajikistan’s civil war destroyed about one-fifth of schools in the country, taking away the ability for children to receive an education, one of the largest factors in reducing poverty.

Yemen has a per capita GDP of $851. According to the United Nations, Yemen is ranked 168th out of 177 countries on the Human Development Index (HDI), meaning that it is one of the least-developed nations in the world. Yemen’s poverty stems from its civil war, corruption, and economic mismanagement. Because of the civil war, more and more Yemen residents are falling below the poverty line. About 79% of the population lives under the poverty line and 65% classify as extremely poor.

With a GDP of $1,004, Kyrgyzstan is the fifth-poorest country in Asia. Kyrgyzstan has the second-lowest gross national income (GNI) in Europe and Central Asia and about 32% of its population lives below the poverty line. One of the largest factors for poverty in Kyrgyzstan is its dependence on agriculture on top of the gaps in knowledge and resources among its people. Kyrgyzstan also has few natural resources that are desirable to the rest of the world and is only able to export cotton and tobacco. Additionally, there is a lack of banking and financial services in the country, preventing people from investing and hindering economic growth as a result.

Cambodia’s GDP per capita is $1,197. As the sixth-poorest country in Asia, Cambodia has very few human resources and high income inequality. Despite recent economic achievements, the country struggles with poverty and the government has done little to build the necessary infrastructure required to lift millions of its people out of poverty.

Myanmar is Asia’s seventh-poorest country. Myanmar’s per capita GDP is $1,207, just above Cambodia’s. About 26% of the population lives in poverty and poverty is twice as high in rural areas, where about 70% of the population lives. The main factors that contribute to slow economic growth are poor government planning, internal unrest, the lack of foreign investment, a large trade deficit, and inadequate infrastructure and know-how to take advantage of the country’s natural resources.

With a per capita GDP of $1,266, Syria is the eighth-poorest Asian country. About 80% of Syrians live at or below the poverty level as of 2017, a 45% increase since 2007. The reason for the sharp increase in poverty is because of the Syrian Civil War. The conflict has destroyed health care infrastructure and education institutes and schools. Education is one of the best ways out of poverty and about 50% of Syrian children no longer attend school because of the conflict. Syria has also experienced very high levels of inflation in recent years, reaching its highest level of 121.29% in 2014.

Pakistan is the ninth-poorest country in Asia. With a per capita GDP just above Syria’s of $1,279, about 40% of Pakistan’s population lives in extreme poverty. This is despite the country being very rich in natural resources. This is because of several reasons, including corruption and elitism in the Pakistani government, religious and secular conflict, and the lack of democratic ideals. The country also spends the largest part of its national expenditures on defense and, as a result, only spends 2.6% of its total GDP on education. This has caused about half of the country’s population to be uneducated.

Finishing the list of the ten poorest countries in Asia is India, which has a per capita GDP of $1,637. Despite having the fifth-largest economy in the world in terms of GDP, about 21% of India’s population (269 million people) live below the poverty line. Causes for poverty in India include illiteracy, gender discrimination, unequal distribution of wealth, and the increasing population. READ: Updated List of the Poorest Countries in South America