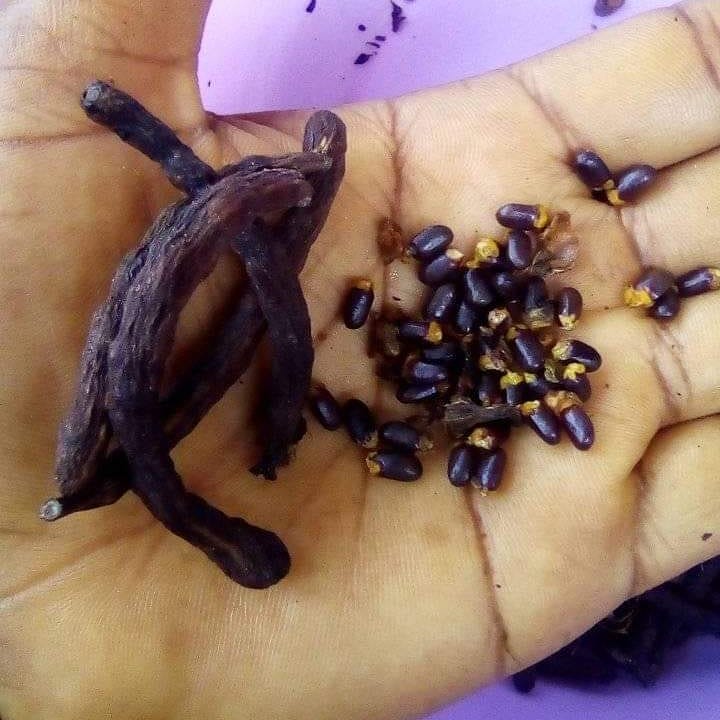 Uda seed  (Xylopia Aethiopica), known as Chimba in Hausa, Eeru alamo in Yoruba, is an important seed in Africa because of its medical and traditional uses. In the Middle Ages, the fruit was exported to Europe as a ‘pepper’. It is used in African cuisines and traditional medicine.

In the Southeastern part of Nigeria, Uda seed is an essential ingredient in the preparation of local soups to aid new mothers in breastfeeding. It remains an important item of local trade throughout Africa as a spice and flavoring for food and for medicine. The fruit is sometimes put into jars of water for purification purposes.

It can be added whole or crushed before being used to prepare assorted food dishes such as soups, yam porridge, pepper soup, stews, sauce, meat, fish, etc. It can be used alone or mixed with garlic or ginger for making herbal tea. It can also be used as a preservative.

Uda seed possesses great nutritional and medicinal values and all the parts are useful medicinally. It contains copper, zinc, protein, camphene, manganese, alkaloids, Diter penic, Limonene, Folic acid, Flavanoid, Vitamins: A, B1, B2, C, and E. The plant is said to contain anonaceine which is an alkaloid resembling morphine in action.

The fruit contains volatile aromatic oil, fixed oil, and rutin.  It can be taken as a decoction, concoction, or even chewed and swallowed for the management of various aches and pains. Uda seed is used in the treatment of a number of diseases including cough, malaria, constipation, uterine fibroid, and amenorrhea. The powdered fruits can be mixed with shea butter and used as body creams.

Studies indicate that Uda seed antioxidant and in vitro antifungal causes activity against some mycotoxigenic, the essential oil of Uda seed has a good antifungal activity which could be used effectively to control fungal growth.

Can I use Uda seed for family planning?

No, Uda seed is a very unreliable form of contraceptive. By itself, spermicide Uda seeds prevent just 72% of pregnancies, the least effective of any major contraceptive measure. Because of its poor success rate, spermicide is often used in conjunction with other contraceptives such as patches and condoms.

Does Uda Seed have any side effects?

Uda Seeds can have side effects. Herbal medicines can cause kidney failure and liver damage in some consumers because they contain toxic chemicals or heavy metals, or react harmfully with other drugs,  studies have found.

It is possible for some active ingredients in Uda seed to affect other medications you may be taking or their metabolism, speeding up the rate at which the medicines are broken down in the liver and reducing their effectiveness.

If you are taking Uda seeds or other herbal remedies, you should disclose it to your clinician, a potential interaction and its consequences can be very detrimental to your health.

Can I Use Uda Seed For Breast Firming?

What Are The Health Benefits and Side Effects Of Vasoprin?