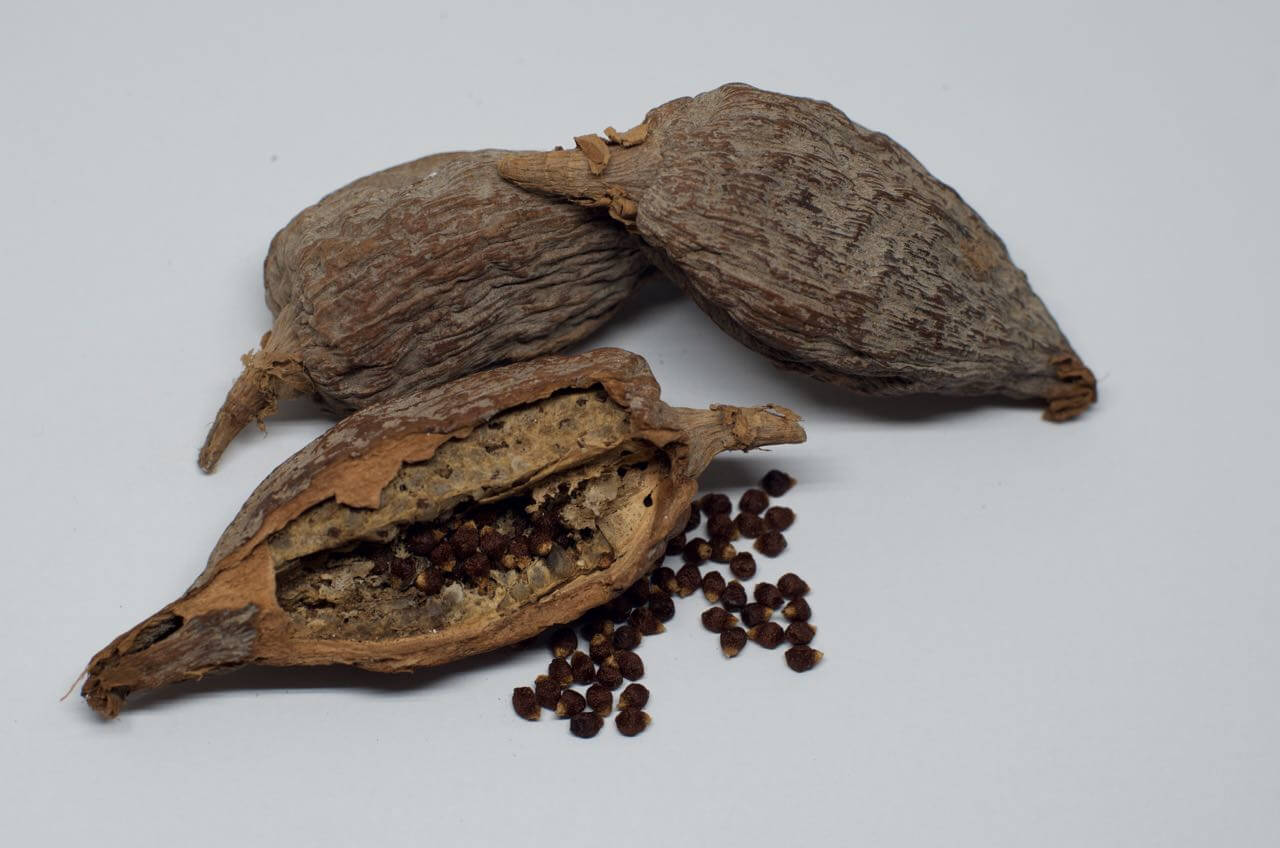 Alligator pepper also known as Atare (in Yoruba), Chitta (Hausa) or Guinea Pepper mbongo spice, or hepper pepper is a West African spice made from the seeds and seed pods of Aframomum danielli. It is a close relative of grains of paradise, obtained from the closely related species, Aframomum melegueta. Unlike grains of paradise, which are generally sold as only the seeds of the plant, alligator pepper is sold as the entire pod containing the seeds.

The seeds of alligator pepper are often sold as the grains isolated from the pod and with the outer skin removed. It is a common ingredient in West African cuisine, where it imparts both pungency and a spicy aroma to soups and stews.

Alligator pepper is considered as one of the gift of nature that means different things to different people. It is served with cola nuts so that the guests can entertain themselves. It is also a common ingredient in pepper soup, a spicy delight in most of West and Asia and Africa. Since ancient times, alligator peppers have been used in traditional medicine to treat many diseases. The alligator pepper plant also has both medical and nutritional values, and the extracts of its seeds have been used as an antidote against many diseases.

Alligator pepper seeds are an excellent source of phytonutrients such as terpenoids, alkaloids, flavonoids, tannins, cardiac glycosides, saponin and phenolic compound. They scavenge for free radicals and offer protections against viruses, allergens, microbes, platelet aggregation, tumors, ulcers and hepatotoxins (chemical liver damage) in the body. This suggests why it is commonly used in folk medicine for preventing and tackling intestinal problems.

The seeds can be crushed and used for preparing concoctions for treating and healing wounds. Alligator pepper contains a high amount of tannin that is distinguished by its stringent property and as such it is very effective for healing wounds, treating burns and soothing inflamed mucous membrane.

The seed extract has antimicrobial properties due to its constituents of phenolic compounds that are normally used as disinfectants. Studies reveal that Aframomum melegueta extract is broad spectrum and as such has inhibitory effect on the growth of the following bacteria:

Salmonella typhi: are bacteria which infect the intestinal tract and the blood. The disease is referred to as typhoid fever characterized by prolonged fever, headache, nausea, loss of appetite, and constipation or sometimes diarrhea.

Staphylococcus aureus: is the most dangerous of all of the many common staphylococcal bacteria. These gram-positive, sphere-shaped (coccal) bacteria (see figure How Bacteria Shape Up) often cause skin infections but can cause pneumonia, heart valve infections, and bone infections.

Klebsiella pneumoniae: Klebsiella pneumoniae is a Gram-negative, non-motile, encapsulated, lactose-fermenting, facultative anaerobic, rod-shaped bacterium. The most common condition caused by Klebsiella bacteria outside the hospital is pneumonia, typically in the form of bronchopneumonia and also bronchitis. These patients have an increased tendency to develop lung abscess, cavitation, empyema, and pleural adhesions.

An aphrodisiac is defined as a food or drug that arouses sexual instinct, brings on desire or increases sexual pleasure or performance. Alligator pepper are popular for their libido-boosting effects. Properties Studies reveal that the alligator pepper is aphrodisiac in nature thus can be used for stimulating sexual desires.

Several things can cause chronic inflammation, including: untreated causes of acute inflammation, such as an infection or injury, an autoimmune disorder, which involves your immune system mistakenly attacking healthy tissue. long-term exposure to irritants, such as industrial chemicals or polluted air. The seed of alligator pepper has anti-inflammatory properties due to its constituent of gingerol that inhibits the leukotriene and prostaglandins synthesis. It offers protection against inflammation of the body.

The study indicates that alligator pepper is a stimulant and diuretic. Diuretics are a common treatment for high blood pressure. Find out how they work and when you might need them. Diuretics, sometimes called water pills, help rid your body of salt (sodium) and water. Crushed seeds mixed with crushed bitter kola and water extract of bitter leaf all mixed with a proper amount of water is used to treat diabetes.

Beriberi is a disease caused by a vitamin B-1 deficiency, also known as thiamine deficiency. There are two types of the disease: wet beriberi and dry beriberi. Wet beriberi affects the heart and circulatory system. In extreme cases, wet beriberi can cause heart failure. Whole fruit eaten along with two moderately sized ginger cures beriberi.

Pain is a distressing feeling often caused by intense or damaging stimuli. The aqueous extract of this plant is analgesic in nature and as such can be used for relieving and alleviating pains such as joint pain, toothache, stomach pain, arthritic pain and rheumatoid pain.

Herbal dermatological products are formulated, using various ingredients used to provide defined cosmetic benefits. There is some evidence that some herbs or herbal treatments can improve psoriasis symptoms by reducing inflammation or skin cell growth. The effectiveness of treatment will depend on many factors, such as the severity of the condition or the time of diagnosis. Alligator pepper can be used for preparing herbal remedy for treating infectious skin diseases such as measles, chickenpox and smallpox.

Malaria is a serious and sometimes fatal disease caused by a parasite that commonly infects a certain type of mosquito which feeds on humans. People who get malaria are typically very sick with high fevers, shaking chills, and flu-like illness. The leaves are used for preparing herbal medicines for preventing and treating malaria.

Side Effects of Alligator Pepper

A study on this plant recommends that lactating mothers should avoid taking alligator pepper in high quantities as it can reduce the prolactin secretion. Prolactin is a hormone released from the pituitary gland that stimulates milk production after childbirth. No doubt that breast milk is essential for newborn babies as it offers them immunity and nutrition before they are of age to easily eat and digest solid foods.

Although extremely rare, anaphylaxis has been reported with some spices. These reactions are consistent with true allergy. Symptoms of a reaction can include digestive problems, hives or swollen airways. Severe reactions can be life-threatening. Individuals allergic to spices should avoid alligator peppers.

Alligator peppers have many wide ranging spiritual uses especially in Africa. In many cultures it has to be taken behind the back before opening it because it is considered a spirit and like every spirit it forbids lots of things to remain effective according to these traditions.

Health Benefits and Side Effects of Okpa (Bambara Beans)