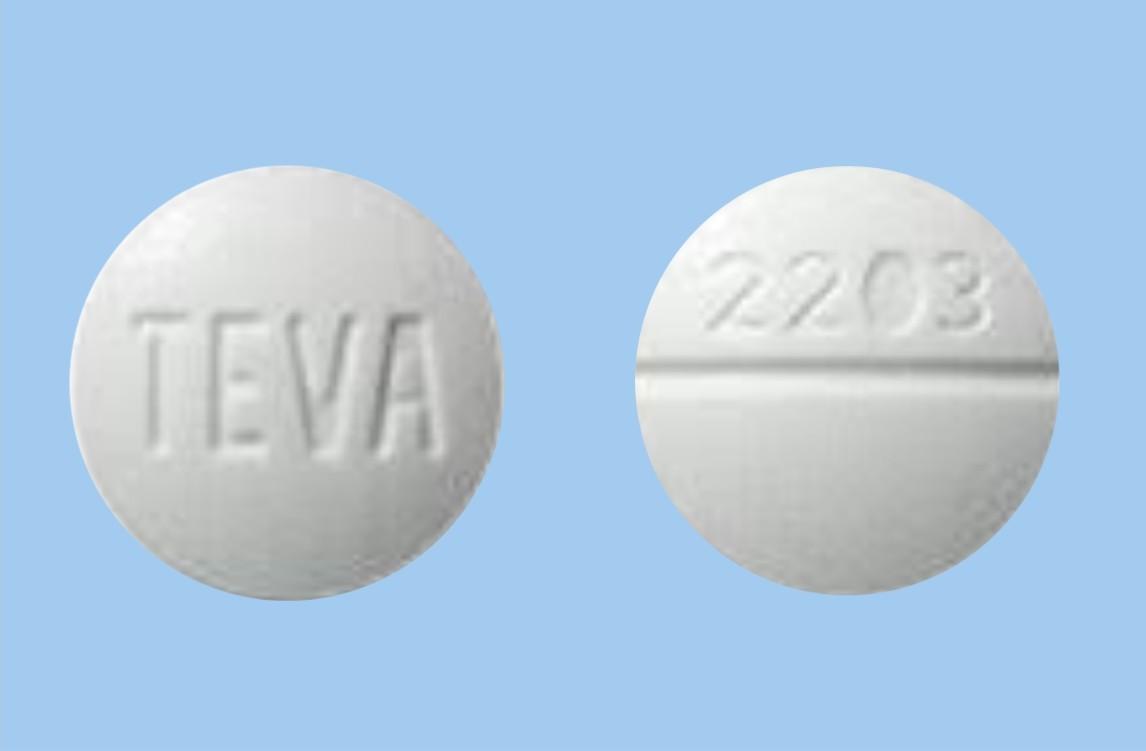 The white round pill with the imprint TEVA 2203 has been identified as Metoclopramide Hydrochloride 10 mg. It is supplied by Teva Pharmaceuticals USA. Metoclopramide 10 mg is not a controlled substance under the Controlled Substances Act (CSA).

TEVA 2203 pill is used to treat gastroesophageal reflux disease (GERD) that causes symptoms. GERD occurs when acid flows up from your stomach. This causes heartburn. It may also harm your esophagus (the tube that connects your mouth to your stomach). This drug is used to relieve heartburn and heal sores in your esophagus when other treatments haven’t worked.

TEVA 2203 pill is also used to treat diabetic gastroparesis. Gastroparesis happens when your stomach takes too long to empty its contents. Symptoms may include nausea, vomiting, heartburn, loss of appetite, and feeling full long after meals.

This drug may be used as part of a combination therapy. This means you may need to take it with other medications to treat your condition.

This drug works by emptying the contents of your stomach. It does this by increasing your stomach muscle contractions. This speeds up the movement of food through your stomach and intestines. It also increases the tightness of your lower esophageal sphincter (the muscle connecting your esophagus and stomach). This stops stomach acid from flowing back up to your esophagus.

What are the side effects of TEVA 2203 pill?

Metoclopramide oral tablets may cause drowsiness. Some people may have dizziness, nervousness, or headaches after they stop taking this drug. It can also cause other side effects.

The more common side effects of metoclopramide can include:

o       thoughts of harming or killing yourself

o       movement in the face, such as blinking, grimacing, or sticking out your tongue

o       slow or fast, jerky movements of the arms and legs

What medications interact with TEVA 2203 pill?

TEVA 2203 pill can interact with other medications, vitamins, or herbs you may be taking. An interaction is when a substance changes the way a drug works. This can be harmful or prevent the drug from working well.

Examples of drugs that can cause interactions with metoclopramide are listed below.

Interactions that increase your risk of side effects from metoclopramide

Taking TEVA 2203 pill with certain medications raises your risk of side effects from metoclopramide. Examples of these drugs include:

Taking any of these drugs with metoclopramide may increase drowsiness.

Taking these drugs with metoclopramide may increase your blood pressure.

Interactions that increase your risk of side effects from other drugs

Taking TEVA 2203 pill with certain medications raises your risk of side effects from these drugs. Examples of these drugs include:

Interactions that can make your drugs less effective

When metoclopramide is used with certain drugs, it may not work as well to treat your condition. Examples of these drugs include:

PH 034 Pill: How it works, Dosage, Side Effects, Interactions