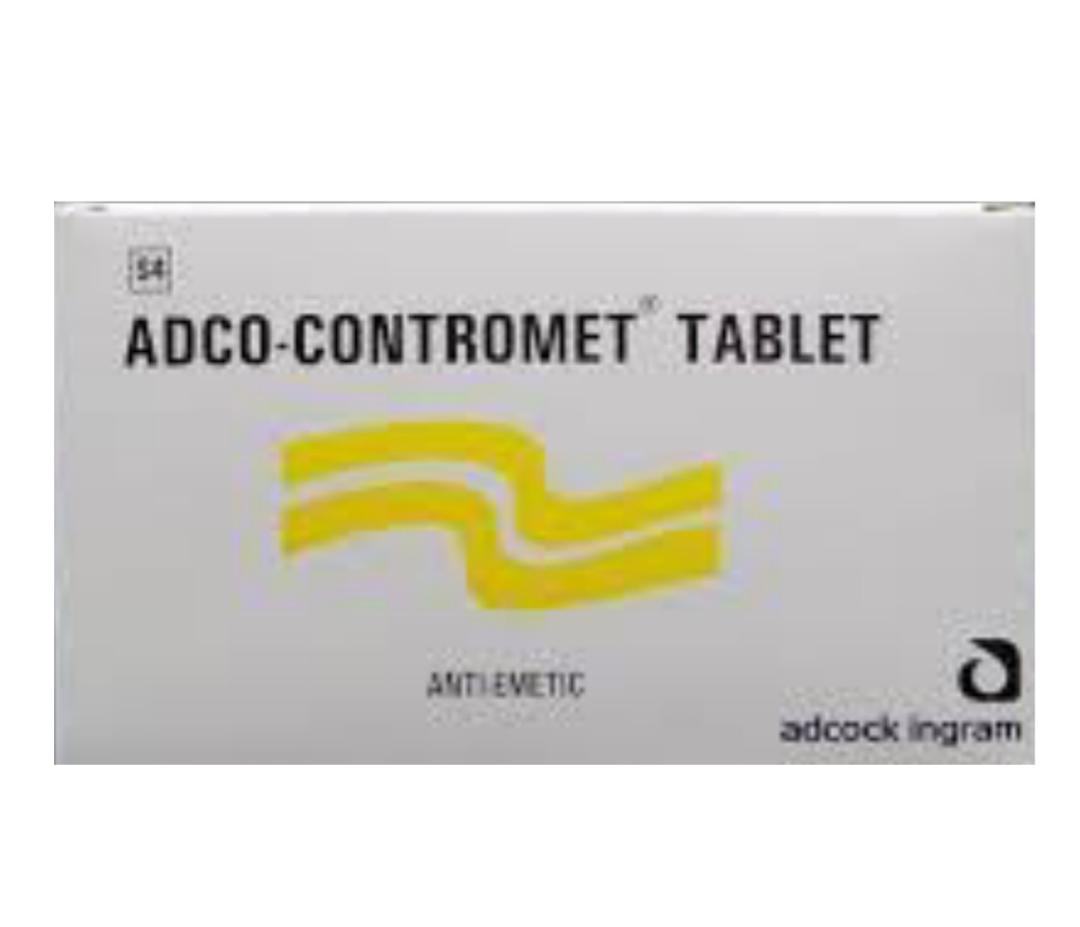 Adco Contromet oral tablet is a prescription medicine containing metoclopramide an antiemetic agent and dopamine D2 antagonist .  It is produced by Adcock Ingram a leading South African pharmaceutical manufacturer listed on the Johannesburg Stock Exchange. One unique property of this drug is that it does not increase gastric acid secretion. Metoclopramide was initially approved by the FDA in 1980.

What is Adco Contromet used for?

Adco Contromet is used to treat gastroesophageal reflux disease (GERD) that causes symptoms. GERD occurs when acid flows up from your stomach. This causes heartburn. It may also harm your esophagus (the tube that connects your mouth to your stomach). This drug is used to relieve heartburn and heal sores in your esophagus when other treatments haven’t worked.

Adco Contromet is also used to treat diabetic gastroparesis. Gastroparesis happens when your stomach takes too long to empty its contents. Symptoms may include nausea, vomiting, heartburn, loss of appetite, and feeling full long after meals.

This drug may be used as part of a combination therapy. This means you may need to take it with other medications to treat your condition.

How does Adco Contromet work?

This drug works by emptying the contents of your stomach. It does this by increasing your stomach muscle contractions. This speeds up the movement of food through your stomach and intestines. It also increases the tightness of your lower esophageal sphincter (the muscle connecting your esophagus and stomach). This stops stomach acid from flowing back up to your esophagus.

Adco Contromet oral tablet may cause drowsiness. Some people may have dizziness, nervousness, or headaches after they stop taking this drug. It can also cause other side effects.

The more common side effects of Adco Contromet can include:

Depression and suicide. Symptoms can include:

Tardive dyskinesia, a movement disorder that can be permanent. Symptoms can include repeated, uncontrollable movements such as:

Parkinsonism (symptoms similar to those caused by Parkinson’s disease). Symptoms can include:

Allergic reaction. Symptoms can include:

Hyperprolactinemia (increased levels of the hormone prolactin). Symptoms can include:

Adco Contromet may interact with other medications

Adco Contromet oral tablet can interact with other medications, vitamins, or herbs you may be taking. An interaction is when a substance changes the way a drug works. This can be harmful or prevent the drug from working well.

Examples of drugs that can cause interactions with Adco Contromet are listed below.

Interactions that increase your risk of side effects from Adco Contromet

Taking Adco Contromet with certain medications raises your risk of side effects from Adco Contromet. Examples of these drugs include: Sedatives, hypnotics, narcotics, antihistamines, and tranquilizers. These include:

Taking any of these drugs with Adco Contromet may increase drowsiness.

Monoamine oxidase inhibitors (MAOIs). These include:

Taking these drugs with Adco Contromet may increase your blood pressure.

Interactions that increase your risk of side effects from other drugs

Taking Adco Contromet with certain medications raises your risk of side effects from these drugs. Examples of these drugs include:

Tetracycline. Adco Contromet increases how much tetracycline your body absorbs. This may increase your risk of side effects of tetracycline, such as diarrhea and vomiting.

Cyclosporine. Adco Contromet may increase the levels of cyclosporine in your body. This may raise your risk of kidney problems, digestion problems, and tingling (pins and needles) feeling caused by damage to your nerves.

Interactions that can make your drugs less effective

When Adco Contromet is used with certain drugs, it may not work as well to treat your condition. Examples of these drugs include:

Digoxin. Your doctor should monitor your digoxin blood levels closely.

Levodopa. Adco Contromet reduces the effect that levodopa has on your body. Your doctor may avoid using this drug with Adco Contromet.

Adco Contromet oral tablet comes with several warnings. Call your doctor if your symptoms don’t improve after taking this drug.

Adco Contromet can cause a severe allergic reaction. Symptoms can include:

If you have an allergic reaction, call your doctor or local poison control center right away. If your symptoms are severe, call 911 or go to the nearest emergency room.

Drinking alcohol can increase the side effects of sleepiness, dizziness, and confusion from Adco Contromet. If you drink alcohol, talk to your doctor.

For people with pheochromocytoma (tumor that releases hormones): You shouldn’t use this drug. This drug increases your risk of dangerously high blood pressure. This puts you at risk for a stroke.

For people with seizures: If you have a history of seizures, you shouldn’t use this drug. It may cause you to have more seizures.

For people with hypertension (high blood pressure): This drug may increase your blood pressure. Ask your doctor if this drug is safe for you.

For people with kidney problems: You may not be able to clear this drug from your body well. This may increase the levels of this drug in your body. This can cause more side effects. Your doctor may start you on a lower dose.

For people with breast cancer: This drug increases prolactin levels in your body. Prolactin is a hormone that may be responsible for cancerous breast tumors. Tell your doctor if you have a history of breast cancer before starting this drug.

Warnings for other groups

For women who are breastfeeding: Adco Contromet passes into breast milk and may cause side effects in a child who is breastfed. Talk to your doctor if you breastfeed your child. You may need to decide whether to stop breastfeeding or stop taking this medication.

For seniors: The kidneys of older adults may not work as well as they used to. This can cause your body to process drugs more slowly. As a result, more of a drug stays in your body for a longer time. This raises your risk of side effects.

If you’re older than 65 years of age, you should take the lowest dose of Adco Contromet that is effective for you. As your dose increases, your risk of symptoms similar to Parkinson’s disease (shaking, body stiffness, moving slowly, and staring blankly with your mouth open) increases. You’re also at a greater risk for uncontrolled movements of your face, tongue, arms, and legs. This effect may be permanent. This drug can also cause confusion in seniors.

For children: This drug hasn’t been studied in children. It shouldn’t be used in people younger than 18 years. This drug may be more likely to cause movement disorders in children than in adults.

How to take Adco Contromet

Read the Medication Guide provided by your pharmacist before you start taking metoclopramide and each time you get a refill. If you have any questions, consult your doctor or pharmacist.

Take this medication by mouth as directed by your doctor, usually up to 4 times daily (at least 30 minutes before meals and at bedtime).

The dosage is based on your medical condition, response to treatment, age, and other medications you may be taking. Be sure to tell your doctor and pharmacist about all the products you use (including prescription drugs, nonprescription drugs, and herbal products).

Because of the risk of tardive dyskinesia, do not take this drug more often, in larger doses, or for longer than directed by your doctor.

If heartburn only occurs at certain times (such as after the evening meal), your doctor may direct you to take a single dose before those times instead of taking it throughout the day. This will reduce your risk of side effects.

To treat diabetic gastroparesis, this medication is usually taken for 2 to 8 weeks until your gut is working well. This condition may recur from time to time. Your doctor may direct you to start taking this medication as soon as your symptoms reappear and stop when you feel better. Ask your doctor for directions for starting and stopping this medication.

If directed, take this medication regularly to get the most benefit from it. To help you remember, take it at the same times each day.

Tell your doctor if your condition lasts or gets worse.

If your creatinine clearance is below 60 mL/min, your doctor will give you about half of the typical starting dosage. They may change your dosage based on how your body responds to the drug. SEE: How Long Does Plenvu Make You Poop?