Sudocrem: Uses, Safety and How to Spot Fakes 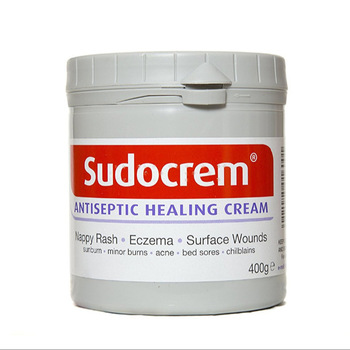 After hitting family shelves in the 1970s, Sudocrem medicated cream has become a familiar product in almost every family home. Sudocrem is a medicated diaper rash cream, popular in countries like the United Kingdom and Ireland but not sold in the United States. Its key ingredients include zinc oxide, lanolin, and benzyl alcohol.

The main use of Sudocrem is for the treatment of babies’ diaper rash. But research has shown it may help treat other conditions. Here, we’ll look at different ways people use Sudocrem and whether it’s effective.

Sudocrem is thought by many to be effective in the treatment of acne spots because of the zinc oxide and benzyl alcohol it contains. Zinc is an important nutrient your body needs to fight infection and inflammation. While zinc is great to consume in foods that you eat, there is no evidence that topical zinc will reduce the inflammation associated with any types of acne.

A 2014 review showed topical anti-acne creams were more effective if they contained zinc. The nutrient was found to be either equal or superior to erythromycin, tetracycline, or clindamycin when used alone in reducing the severity of acne. However, acne was not controlled by topical zinc alone. Benzyl alcohol may have a drying effect on cystic acne and may also help to dull pain associated with breakouts. Yet there’s no evidence it’s an effective acne treatment.

Is Sudocrem effective for wrinkles?

Yes, it’s possible that Sudocrem can be an effective treatment for wrinkles. A 2009 study found that the zinc oxide in Sudocrem stimulates the production of elastin in the skin. It may also help regenerate elastic fibers, which would reduce the appearance of wrinkles.

Rosacea is an inflammatory skin condition that can cause your skin to become flushed, red, itchy, and irritated. There’s no evidence to support the use of topical products containing zinc to treat rosacea, although there’s also no evidence against it. The benzyl alcohol in Sudocrem may be irritating to sensitive skin, especially in people who have rosacea. This means it may make redness and dryness worse.

Topical products that contain zinc may be effective in treating eczema. A 2014 review of zinc products for skin conditions found that topical zinc reduced symptoms in people who had eczema on their hands. Topical zinc has both antibacterial and anti-inflammatory properties.

Sudocrem can be a highly effective treatment for dry skin. While its main use is for the treatment of diaper rash, it’s also useful as a protective layer for hands. One of its main ingredients, lanolin, is the main ingredient in many different moisturizers. A 2017 study  found that lanolin can help your skin retain 20 to 30 percent more water, keeping it moisturized longer.

Sudocrem can be an effective barrier cream that may protect against bed sores (pressure ulcers). A 2006 study examined skin irritation in older adults with incontinence. The group that used Sudocrem experienced 70 percent less redness and irritation than those who used zinc oxide alone.

Is Sudocrem safe for babies?

Sudocrem was designed as a cream to treat diaper rash and eczema in babies. It acts as a protective barrier for babies’ delicate skin. Its zinc and lanolin ingredients protect skin against moisture while hydrating the skin. The benzyl alcohol in Sudocrem acts as an anesthetic that prevents pain associated with diaper rash.

Another effective use of Sudocrem is the treatment of minor cuts, scrapes, and burns. Because it acts as a protective barrier, it prevents infection by blocking bacteria from entering a wound. A 2018 review found that zinc can help speed up healing times for wounds. Another benefit of  Sudocrem for wound treatment is that benzyl alcohol can act as a pain reliever. 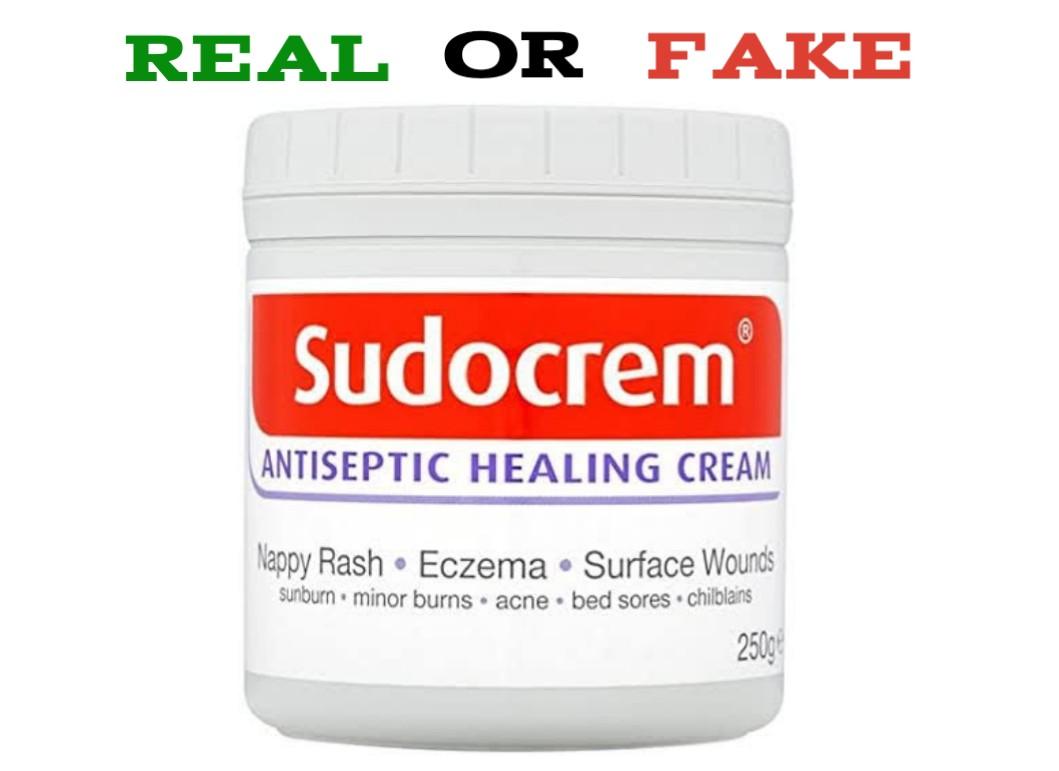 How to Spot Fake Sudocrem

As with any successful product, there are several versions of fake Sudocrem mostly from China. Counterfeiters have denied many genuine buyers the right and the joy of enjoying the benefit of Sudocrem. Counterfeit cosmetics contain dangerous chemicals that cause adverse reactions to the skin and organs. Quite often it contains infection-causing bacteria that can lead to scarring, burning and disfigurement, and even fecal matter.

It’s fairly common to find local vendors selling imitation products, which are commonly sourced from online marketplaces like AliExpress. These shady beauty deals are “posing a serious health risk”.  A 2015 report by the European Union’s law enforcement agency found that 86 per cent of fake cosmetics are produced in mainland China and Hong Kong with more than 90,000 ‘fakeups’ seized at a Chinese port in 2017.

Online shopping can be a blessing for any busy person, especially people  who may never find time to make it to a store amid diaper changes, food spills, and temper tantrums. In fact, almost half of parents in the United States said they shop online weekly, according to a Pitney Bowes e-commerce study—totally understandable.

But buyers should be wary when buying Sudocrem off online marketplaces, such as Amazon, eBay, and Walmart.com. Unfortunately, they aren’t safe from counterfeit products (exact imitations pretending to be a product) and knockoffs (resembling the product but not identical) that have long been making their way online. And many  have fallen victim: 30 percent of them have bought a fake baby item online, according to research from Red Points.

Consumers are reporting a number of symptoms from using counterfeit products , including eye infections, allergic reactions, skin rashes, swollen lips and chemical burns. In worst cases, the toxic ingredients in many fake products have caused long-term health problems such as high blood pressure and infertility. However, most customers are unaware of the harmful side effects until it’s too late.

How to Spot Fakes

Note the Pricing: Of course, you should always buy your products from one of the brand’s licensed retailers, but we admit—a good sale is pretty hard for us to resist. If the sale is a little too good to be true, it probably is.

Check the Label: Counterfeit products will often have uneven fonts, misspelled words, inconsistent patterns, and incorrect shade names printed on the label and leaflets, so make sure to cross-check the item with the one on the brand’s official website. If your product features a “peel-to-reveal” stickers, which can be peeled back to show the full ingredient list, that’s a sign it’s genuine.

Pay Attention to the Packaging: If you previously purchased a Sudocrem, line the items up side-by-side to compare their exteriors. Fake products are housed in lower-quality plastic or metal casings, often paired with ill-fitting mirrors and sponge-tipped applicators. The name of the shade should be printed on a sticker as opposed to the box. Products that don’t quite fit into the box as they should, as well as boxes with exposed pieces of cardboard, are other indicators that you may have picked up a phony.

Swatch the Color Before Using: Just like low-quality packaging, a seemingly cheaper formula is a telltale sign of a counterfeit baby product. Fake products typically have a thinner consistency than the real counterparts. Unless they’re unscented, many genuine products will have a signature fragrance.

Special warnings and precautions for use

For external use only and should not be allowed to come into contact with the eyes and the mucous membranes. When using this product do not smoke or go near naked flames – risk of severe burns. Fabric (clothing, bedding, dressings etc) that has been in contact with this product burns more easily and is a serious fire hazard. Washing clothing and bedding may reduce product build-up but not totally remove it.

Sodium benzoate may cause local irritation and may increase jaundice (yellowing of the skin and eyes) in newborn babies (up to 4 weeks old). Side effects can also include local hypersensitivity occasionally. READ: How to Spot Fake Nivea Creams and Products

The Secret Fat Burner: How to Spot Fakes