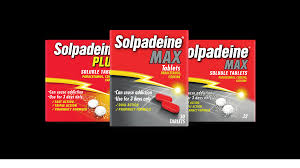 Solpadeine is the brand name of a range of analgesic medications containing various amounts of paracetamol, ibuprofen, caffeine and codeine, made by Omega Pharma. The range was previously made by GlaxoSmithKline, which sold its portfolio of over-the-counter drugs to Omega Pharma in 2012. Codeine is indicated in patients older than 12 years of age for the treatment of acute moderate pain which is not considered to be relieved by other analgesics such as paracetamol or ibuprofen alone.

Special warnings and precautions for use

Care is advised in the administration of paracetamol to patients with renal or hepatic impairment. The hazard of overdose is greater in those with non-cirrhotic alcoholic liver disease.

Do not exceed the stated dose.

If symptoms persist consult your doctor. Keep out of the reach and sight of children.

Patients with obstructive bowel disorders or acute abdominal conditions should consult a doctor before using this product.

Patients with a history of cholecystectomy should consult a doctor before using this product as it may cause acute pancreatitis in some patients.

How do I know if I am addicted to Solpadeine?

Solpadeine contains Codeine phosphate hemihydrate as an active ingredient. Codeine is a prescription drug used to treat mild to moderately severe pain. It is a strong and highly addictive drug. You can become addicted to codeine even if you’re taking a combination product such as Solpadeine. Kicking the habit can put your body through withdrawal. Getting through it can be tough, but it’s worth the effort.

Over time, you may develop tolerance to the effects of codeine. This means your body needs more and more of the drug to feel the same pain relief or other desired effects. In other words, tolerance makes the drug seem less effective to your body.

How quickly you develop codeine tolerance depends on factors such as:

If you take the medicine according to the instructions on the pack it is unlikely that you will become addicted to the medicine. However, if the following applies to you it is important that you talk to your doctor:

Adverse events from historical clinical trial data are both infrequent and from small patient exposure. Accordingly, events reported from extensive post-marketing experience at therapeutic/labelled dose and considered attributable are tabulated below by system. The frequency of these adverse events is not known (cannot be estimated from available data).

Overuse of this product, defined as consumption of quantities in excess of the recommended dose, or consumption for a prolonged period of time may lead to physical or psychological dependency. Symptoms of restlessness and irritability may result when treatment is stopped.

The effects of overdosage will be potentiated by simultaneous ingestion of alcohol and psychotropic drugs.

Central nervous system depression, including respiratory depression, may develop but is unlikely to be severe unless other sedative agents have been co-ingested, including alcohol, or the overdose is very large. The pupils may be pin-point in size; nausea and vomiting are common. Hypotension and tachycardia are possible but unlikely.

This should include general symptomatic and supportive measures including a clear airway and monitoring of vital signs until stable. Consider activated charcoal if an adult presents within one hour of ingestion of more than 350 mg or a child more than 5 mg/kg.

Give naloxone if coma or respiratory depression is present. Naloxone is a competitive antagonist and has a short half-life, so large and repeated doses may be required in a seriously poisoned patient. Observe for at least four hours after ingestion, or eight hours if a sustained release preparation has been taken.

Symptoms of paracetamol overdose in the first 24 hours are pallor, nausea, vomiting, anorexia and abdominal pain. Liver damage may become apparent 12 to 48 hours after ingestion. Abnormalities of glucose metabolism and metabolic acidosis may occur. In severe poisoning, hepatic failure may progress to encephalopathy, haemorrhage, hypoglycaemia, cerebral oedema and death. Acute renal failure with acute tubular necrosis, strongly suggested by loin pain, haematuria and proteinuria, may develop even in the absence of severe liver damage. Cardiac arrhythmias and pancreatitis have been reported. READ: What Plant Does Cocaine Come From?

Acetaminophen vs. Paracetamol: Is There Any Difference?

Can Mylan 155 Get You High?
Solpadeine
July 28, 2022 Health FeaturesPublic HealthComments Off on Solpadeine High and Addiction