Side Effects Of Egyptian Milk (Kamana) 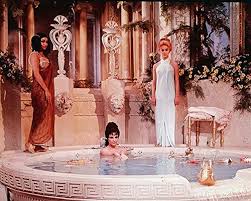 What is Egyptian milk?

Egyptian milk bath has become really famous after historians and archaeologists proved that this procedure was number one in Cleopatra beauty arsenal, Queen of Egypt Cleopatra took milk baths on a daily basis. Milk bath is known as a rejuvenating procedure since ancient times.

When milk sours, the milk sugar lactose is converted by bacteria into lactic acid. When alpha hydroxy acids, such as lactic acid, are applied to the skin they cause the surface layer to peel off, leaving new smoother blemish-free skin underneath. It is questionable whether sour milk has enough lactic acid to rejuvenate the skin, but modern cosmetics which contain at least 8% alpha hydroxyl acids can reduce minor wrinkles.

Side Effects Of Egyptian Milk

It is known that for milk baths, Queen Cleopatra used the milk of a young donkey. However, beauticians say: there is no difference what milk you have – cow or goat milk. Using milk on your skin can cause hives, itching, inflammation, and redness. Some people may also be allergic to milk.

When applied to the skin, beeswax one of the major ingredients is safe for most people. While rare, some people may have an allergic skin rash after applying beeswax. Pure bearberry extract for skin lightening is effective in treating sun spots, age spots and melasma. Another benefit of bearberry extract is it contains sun protection filters that can reduce the effects of sun exposure helping to slow the effects of aging. However, using bearberry containing products over an extended period of time is not recommended because studies have shown that it may result in liver damage, don’t use Egyptian milk if you have a history of kidney, liver, or digestive problems.

On its own, licorice root extract a key component of Egyptian milk rarely causes an allergy. It may lead to an allergic reaction when mixed with other ingredients that the skin may be sensitive to. Licorice root extract is known to be effective when mixed with vitamin C and niacinamide which are proven skin brightening agents and antioxidants. On the other hand bee propolis extract is also safe when applied to the skin appropriately. Nevertheless, it can cause allergic reactions, especially in people who are allergic to bees or bee products.

Use Of Egyptian Milk for Skin Conditions

One study found that topically applying human breast milk was as effective for treating babies with eczema as hydrocortisone ointment. But more research is needed. There isn’t currently any evidence that milk baths for adults are an effective treatment for eczema. It shouldn’t replace your prescribed skin medication. Milk baths may also help relieve poison ivy symptoms. The milk may help soothe redness, itchiness, and inflammation. But studies on the efficacy of a milk bath for treating poison ivy are limited.

The proteins, fat, amino acids, and vitamin A and D found in milk can be calming and soothing for sunburned skin. Try soaking for up to 20 minutes. Follow your bath with aloe vera or another moisturizer for best results. If you find milk baths soothing, talk to your dermatologist to confirm they are safe for your skin.

It is important to note that many beauty products masquerading as pure Egyptian milk are just bottles of whitening chemicals some of which contain hydroquinone, mercury and corticosteroids. These components each come with documented health risks. Because many over-the-counter and natural skin lightening products have not been proven safe or effective, many don’t provide long-lasting results. Users may notice that their skin returns to its original color after the bleaching effect wears off.

People who have used skin lightening products have reported dermatitis and skin irritation. Because many of the products contain steroids, steroid acne is also a possible side effect. Skin lightening products can lead to skin breakdown and leave users with open sores and scarring. The redness and lesions can lead to pain that is difficult to manage. The ingredient hydroquinone has been linked to exogenous ochronosis, a disorder that makes the skin appear black and blue. This condition is difficult to treat and can result in permanent discoloration of the skin.

Skin Bleaching Has Its Roots in Prejudice

A deeply negative side to skin lightening creams is that they can be used to promote or perpetuate colorism. Colorism refers to the belief that lighter skin is better and more beautiful than darker skin. Women around the globe have felt pressure to use these sometimes-dangerous products in order to avoid prejudice and gain privilege in certain cultures.

Concerns have been raised over recent years about the mercury content in skin lightening creams. Mercury is a heavy metal that is toxic in even small amounts. The FDA has limited the amount of mercury in cosmetic products to trace amounts not exceeding 1 ppm. In a 2014 study, researchers tested 549 skin lightening products for their mercury content, and found that 6% contained mercury levels above 1000 ppm and some as high as 10,000 ppm. Of the U.S. products, 3.3% had mercury levels over 1000 ppm. While the products from the United States were safer, it can be difficult to determine the origin country of the products when purchasing from online retailers.

Milk baths are not safe for everyone. Avoid them if you have sensitive skin. The lactic acid in milk may irritate it.

What types of milk can you use in a milk bath?

You can use various types of milk in a milk bath, including:

Limited evidence exists whether one type of milk is more effective than another for the skin. You can experiment with different types of milk and determine which one you prefer. Avoid skim milk, though. The full-fat version of milk will be more nourishing for your skin. SEE: How to Use Moroccan Black Soap: Benefits and Side Effects

Benefits and Side Effects of Asantee Papaya Soap

What Are The Side Effects Of Skin of Bleaching Products?