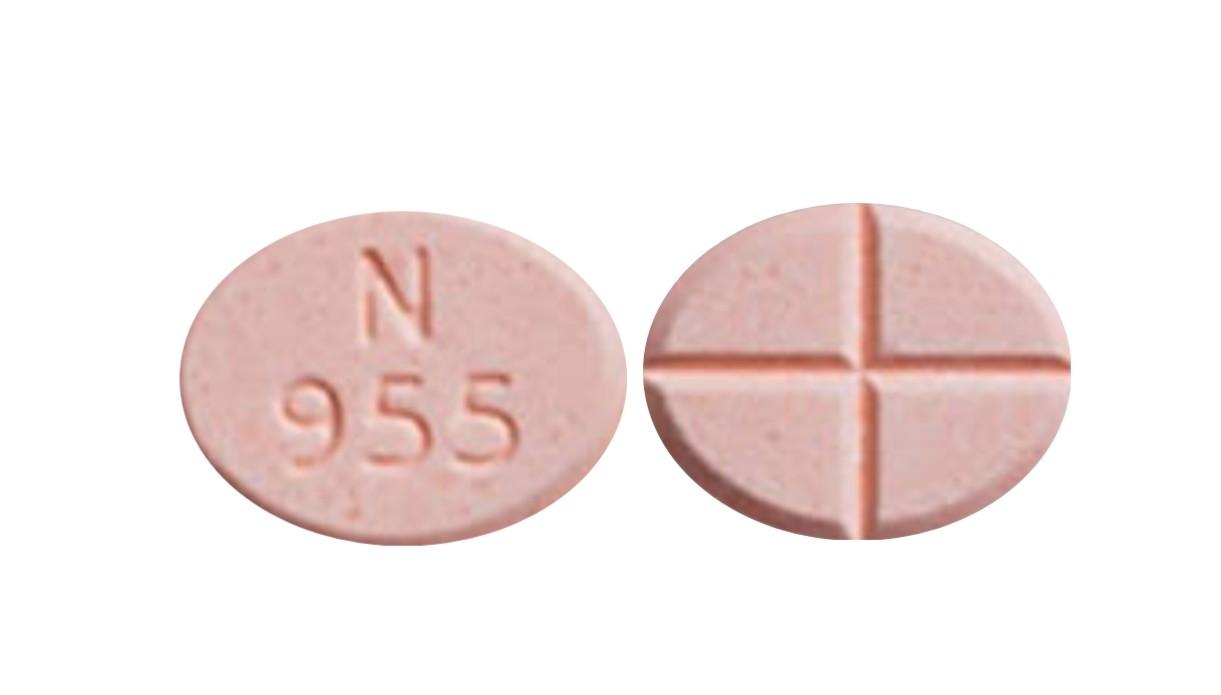 Attention-deficit/hyperactivity disorder (ADHD) is one of the most common mental disorders affecting children. ADHD also affects many adults. Symptoms of ADHD include inattention (not being able to keep focus), hyperactivity (excess movement that is not fitting to the setting) and impulsivity (hasty acts that occur in the moment without thought).

An estimated 8.4% of children and 2.5% of adults have ADHD. ADHD is often first identified in school-aged children when it leads to disruption in the classroom or problems with schoolwork. It is more common among boys than girls.

The peach, elliptical / oval pill with the imprint N 955 has been identified as Amphetamine and Dextroamphetamine 20 mg supplied by Zydus Pharmaceuticals (USA) Inc.. N 955 pill is a type of Adderall, a prescription drug used primarily to treat ADHD or narcolepsy (daytime sleepiness). The medication alters certain naturally-occurring chemicals in your brain by enhancing the effects of neurotransmitters such as dopamine and norepinephrine.

For ADHD, N 955 Adderall is designed to improve hyperactivity, impulsive behavior, and attention span. According to the Cleveland Clinic, stimulants like Adderall improve symptoms of ADHD in 70 to 80 percent of children, and in 70 percent of adults. The positive effects can be even greater when it’s used along with behavioral therapy.

Before taking N 955 orange pill, tell your doctor about any preexisting physical or mental health problems you have and list all other prescription and over-the-counter medications you take. Adderall is a federally controlled substance that should never be taken without medical supervision.

How should N 955 Adderall be taken?

The N 955 orange pill dosage your doctor prescribes will depend on several factors. These include:

Typically, your doctor will start you on a low dosage and adjust it over time to reach the dosage that’s right for you. They’ll ultimately prescribe the smallest dosage that provides the desired effect.

The following information describes dosages that are commonly used or recommended. However, be sure to take the dosage your doctor prescribes for you. Your doctor will determine the best dosage to suit your needs.

While these uses aren’t approved by the FDA, doctors may prescribe Adderall to treat other conditions besides ADHD and narcolepsy. This is called off-label use. It means a drug that’s approved to treat one condition is prescribed by a doctor to treat another condition that’s not approved.

Some people who take Adderall or similar stimulant medication along with antidepressant medication have improved depression symptoms.

However, taking stimulants with antidepressants can increase the risk of side effects. Talk with your doctor before combining Adderall and any antidepressant medication.

N 955 pill and other stimulants are sometimes prescribed off-label for treating symptoms of depression in people with bipolar disorder. When used for this purpose, stimulants aren’t usually used by themselves, but are combined with other bipolar medications.

Talk with your doctor before combining Adderall with medications used for bipolar disorder.

Other uses that aren’t approved

People may sometimes misuse Adderall without their doctor’s recommendation or prescription. In some cases, this type of misuse of Adderall can lead to abuse of the drug. You should never use Adderall if it hasn’t been prescribed for you by your doctor.

N 955 pill can cause a loss of appetite. Because of this side effect, some people misuse Adderall as a weight loss aid.

Adderall is often misused by people without ADHD to increase focus, concentration, and endurance when studying. This occurs especially often with college students.

However, a recent study suggests that for people without ADHD, Adderall doesn’t improve thinking. In addition, it could worsen memory.

What are the side effects of N 955 Adderall?

N 955 pill can cause mild or serious side effects. The following list contains some of the key side effects that may occur while taking Adderall. This list doesn’t include all possible side effects.

For more information on the possible side effects of N 955 pill, or tips on how to deal with a troubling side effect, talk with your doctor or pharmacist.

The more common side effects of N 955 pill can include:

Call your doctor right away if you have serious side effects. Call 911 if your symptoms feel life-threatening or if you think you’re having a medical emergency.

Serious side effects and their symptoms can include the following: