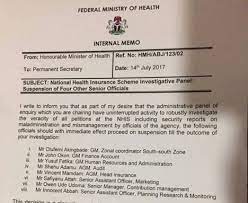 The ongoing power play between the suspended Executive Secretary of the National Health Insurance Scheme (NHIS), Prof. Usman Yusuf, and the Minister of Health, Prof. Isaac Adewole, took a new turn Monday when security personnel laid siege to the Abuja premises of the agency.

This is coming as the minister also suspended eight more NHIS officials implicated for their role in the alleged fraud, nepotism and abuse of office committed by Yusuf, which led to his suspension penultimate week.

THISDAY findings revealed that the security personnel, including policemen and officers of Nigeria Security and Civil Defence Corps (NSCDC) were stationed at the head office of NHIS and its annex in Wuse 2, both in Abuja, to prevent Yusuf from forcefully gaining entry into the agencys offices.

Since his suspension by the minister to enable the health ministry investigate the allegations levelled against him, Yusuf, who was appointed Executive Secretary of NHIS by President Muhammadu Buhari a year ago, has maintained his innocence and defiantly told Adewole that only the president could remove him.

According to a source, the arrival of security personnel at the NHIS Monday got the backing of its workers union, which has vowed to prevent any attempt by Yusuf to disobey the three months suspension order.

The presence of the security personnel is a welcome development and we want to make it clear to Yusuf that he must obey the suspension order until the allegations against him have been fully investigated.

Why is he in a hurry and why does he not want to be investigated? He is not above the law and should be grateful its only three months, the source said.

Adewole Monday also approved the suspension of eight NHIS officials in order to pave the way for a thorough investigation of the allegations of corruption and nepotism levelled against Yusuf.

The minister, in a statement by the Director, Media and Public Relations in his ministry, Mrs. Boade Akinola, said the suspension was in furtherance of the establishment of the investigative panel of inquiry and the desire to have an uninterrupted and robust investigation of all petitions at the NHIS, including security reports on maladministration and mismanagement by officials of the agency.

The minister urged the committee to remain focused, fair and transparent in the discharge of the national task despite the sensation this development has generated. Adewole also directed the acting Executive Secretary of NHIS, Mr. Attahiru Ibrahim, to ensure the immediate implementation of the suspension order