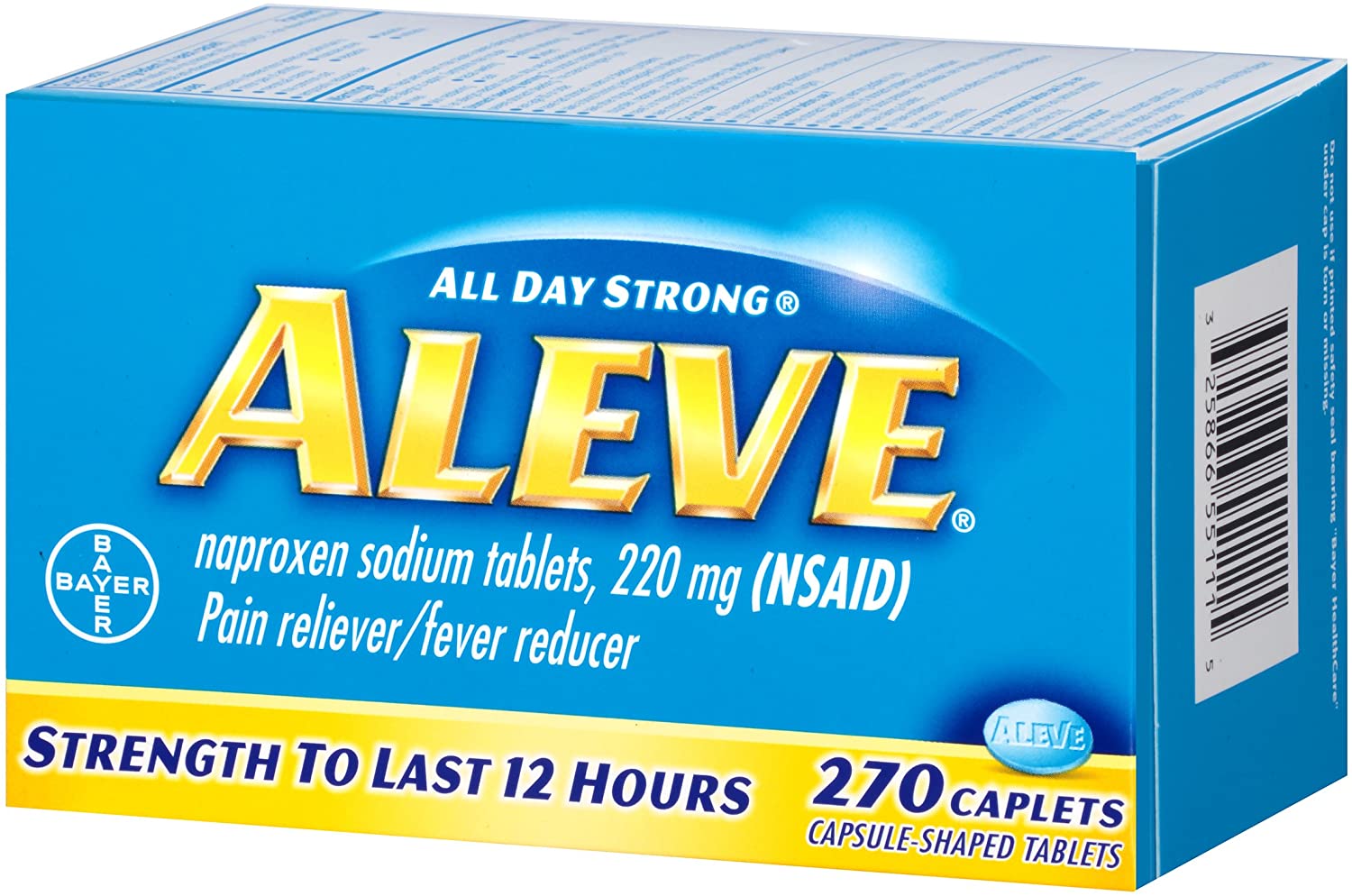 What is Aleve, and how does it work (mechanism of action)?

Aleve belongs to a class of drugs called nonsteroidal anti-inflammatory drugs (NSAIDs). Other members of this class include ibuprofen (Motrin), indomethacin (Indocin), nabumetone (Relafen), and several others. These drugs are used for the management of mild to moderate pain, fever, and inflammation. They work by reducing the levels of prostaglandins, chemicals that are responsible for pain, fever, and inflammation. Naproxen blocks the enzyme that makes prostaglandins (cyclooxygenase), resulting in lower concentrations of prostaglandins. As a consequence, inflammation, pain, and fever are reduced. Naproxen was approved by the FDA in December 1991.

What are the uses for Aleve?

Aleve is used for the treatment of mild to moderate pain, inflammation, and fever.

Side effects from short-term use of Aleve

Prostaglandins naturally help protect your stomach from damage. When Aleve reduces your prostaglandin production, it can cause:

These effects are more likely the older you are or the longer you use Aleve.

More serious side effects include:

These effects can be fatal and can happen without warning. If you notice severe stomach pain or bloody or black, tarry stools while you take Aleve, stop taking the drug and call your doctor right away. To lower your risk of digestive system side effects, use the lowest effective dosage for the shortest time.

Aleve can also reduce your blood’s ability to clot. This can lead to bleeding. Talk to your doctor before using Aleve if you plan on having surgery soon.

Side effects from long-term use

Long-term use of Aleve can make your heart work harder. Aleve makes you retain water, which increases the load on your heart. This extra work can cause pressure on your cardiovascular system and can sometimes lead to a heart attack or stroke. These risks are even greater at higher dosages, even if you don’t have any heart conditions or risk of heart disease. Call 911 or local emergency services if you have:

These are signs of a stroke or heart attack. If you take Aleve and have unexplained weight gain or swelling, especially in your legs and feet, talk to your doctor right away. These may be signs of heart failure. To lower your risk of heart problems, use the lowest dosage for the shortest amount of time.

Prostaglandins maintain the pressure in your kidneys so that these organs can filter the fluids in your body. A decrease in your level of prostaglandins from taking Aleve can cause problems with your kidney function. You may notice fluid retention or changes in how much you urinate. If you notice these changes while taking Aleve, stop taking it and contact your doctor.

People with certain medical conditions may experience more side effects from Aleve than other people. These conditions include:

If you have any of these conditions, talk to your doctor before using Aleve. Your doctor may suggest another medication to avoid complications.

Differences Between Aleve and Ibuprofen

One of the most important differences between Aleve and ibuprofen is the length of time they act for. Ibuprofen is short-acting and is better suited for the treatment of acute pain, whereas Aleve is long-acting and is used for the treatment of chronic conditions. Aleve is more likely than ibuprofen to cause gastrointestinal (GI) side effects because it is longer acting. Ibuprofen is also the most appropriate NSAID (nonsteroidal anti-inflammatory drug) for children.

Effectiveness of Aleve and ibuprofen

Aleve and ibuprofen are called nonselective NSAIDs because they block COX-2 enzymes (involved in pain signaling and inflammation) and also COX-1 enzymes (associated with a protective effect on stomach lining). This makes them effective at relieving pain and reducing inflammation, but there is a risk of stomach-related side effects. As far as effectiveness goes, 440mg Aleve is approximately equivalent to 400mg ibuprofen.

Aleve is Long Acting and ibuprofen is Short Acting

Ibuprofen is considered a short-acting NSAID, with a relatively quick onset of action. It is better suited for the treatment of acute pain and is the most appropriate NSAID for children. Ibuprofen tablets/capsules need to be given every four to six hours. Aleve is considered long-acting and can be given twice daily. It has a slower onset of effect and is better suited for the treatment of chronic conditions.

Research has discovered that the risk of gastrointestinal (GI) side effects such as stomach ulcers and stomach bleeding increases the longer somebody takes NSAIDs. Aleve is more likely than ibuprofen to cause GI side effects because it is longer acting. To reduce the risk of GI side effects, NSAIDs should only be taken at their lowest effective dose, for the shortest possible time. Doubling up on NSAIDs (for example taking Aleve and ibuprofen at the same time) is unnecessary, and to be avoided as it increases the risk of both GI and cardiovascular side effects. If you are prescribed low-dose aspirin to reduce your risk of a heart attack or stroke, then talk to your doctor BEFORE taking NSAIDs, as these may negate the protective effects of aspirin.

Talk with your doctor

For most people, Aleve is an effective treatment for mild pain and fever, especially for short-term use. Side effects can occur, but for the most part, the effects are mild. Typically, more severe side effects are associated with extended use. But, as with any medication, if you have a medical condition, take other drugs, or simply aren’t sure if you should take it, talk to your doctor.

How Long Does It Take For Aleve (Naproxen) to Work

How Long Does It Take For Ibuprofen To Work?

How Much Ibuprofen Can I Take?

How Often Can You Take Ibuprofen?
Is Aleve Ibuprofen
July 20, 2022 Health FeaturesPublic HealthLeave a comment